I started a blog about this a couple of years back only to find that googling ‘shower patterns’ doesn’t get you very far in www.world. But having received a complimentary Ecocamel Orbit shower head (cheers guys!) I thought I should revisit. Otherwise this blog will just look like an advertorial, and that would never do. Well, well, well. It seems that the Google spiderbots have been doing their job in the interim period because this time, instead of pages and pages of baby shower presents and ideas, I have got pictures of exactly what I asked for.

Our old Hansgrohe shower head had a series of different spray patterns. But, did we ever use them? No! We put it onto ‘eco’ the day we fitted it and never changed it. Even when I was doing all my shower experiments. Just to remind me of what I was missing here are some of them.

And just to remind those who might have missed them first time around, here are three other blogs about different shower heads and the resulting spray patterns. In showering in a design icon I deconstruct (only metaphysically mind) the Nebia shower and its patented atomising spray nicked from the aerospace industry. In showering in a design icon 2, we trial a Philip Starke designed shower head in brass and chrome. It’s superbly minimalist but Suhith rejects it as splashing everywhere too much. Then there are the Methven colliding water droplets and the AquaAir aerating technology, both appraised in shower trials Part 1.

Loyal readers will know that Suhith has the final (possibly the only) say on which shower head gets to stay, so how would the Orbit fare? First things first, it looks really stylish. Even Suhith had to agree with that. In fact it looks so good it’s almost as though The Saint himself is carrying round a shower-come-halo combo as modelled here. 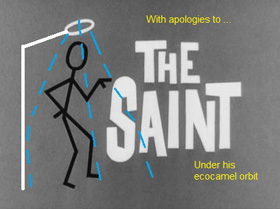 I did wonder whether the hole in the middle would result in a stream of water all around instead of on the person showering. But the design makes use of a ‘unique bicycle spoke pattern to provide a powerful and even spray’ – so that’s sorted then.

Plus it has ‘built-in SoftWater Technology’.

My mate Colin, who owns a plumber’s merchants, reckons only ion-exchange water softeners actually work in softening the water, and science would back him up. This system uses an ‘electro-chemical catalytic reaction’ that happens in the actual body of the shower head; this means that any effect doesn’t have time to wear off, so you never know. Would be brilliant if it worked. I spend too much of my life draping vinegar soaked kitchen paper on our shower screen… 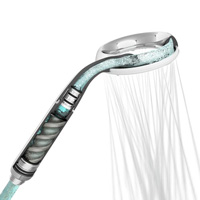 Unfortunately the shower didn’t last long enough to prove whether or not it is effective at softening the water under the exacting test conditions of Suhith the showermeister! “Too noisy”, she said. It’s true that it is noisier than any other showerhead I have used; as air is forced into the water stream through the holes at the base of the handle it mixes with the water and spins around at high speed causing turbulence which increases the pressure inside the showerhead. As the mixture of air and water rattles through, I can only marvel at the amount of air it must be dragging in. That’s ‘Aircore technology’ for you. Like marmite – you love it or you hate it. 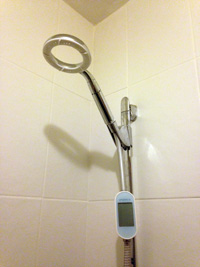 And then Suhith didn’t like the spray pattern either. To make the ‘unique bicycle spoke spray pattern’ meet before the water hits you the shower head has to be really high. So high in fact that it ends up above our shower screen, and Andrew Tucker of Thames Water would feel right at home under it. Just one problem about that…. he’s an Aussie and their test team are back at No.1 in the world. Sure, we have the Ashes, but our top order is misfiring and the Ashes are back up for grabs this winter. We need a reason he can’t possibly stay so the shower head has to go!