“How do you improve a design icon?” asks the latest Fiat 500 ad. Before proving essentially that you can’t. Which is my way of pacifying Minty whilst segwaying neatly into the subject of this month’s blog, a shower that its inventers hope will become a design icon in its own right. Currently famous for raising over $3 million in just 30 days on Kickstarter, and for the fact that it uses ‘70% less water than an standard shower due to its ‘atomised spray’, it is the Nebia shower.

So, first things first, 70% of how much? There are plenty of UK showers out there that struggle to reach a flow rate of 7 litres/minute, especially if fed from a cold water storage cistern. 70% of that flow rate is 2.1 litres/minute, a seriously small amount of water. But the Nebia shower is for the US market, where the water supply is usually direct from the mains, so the starting flow rate was obviously going to be higher. I hoped that with the 70% reduction we would be looking at 3-4 litres/minute of a fine spray atomised all over the body. But if it was going to be from a starting point of 25 litres/minute, a 70% reduction would only ‘reduce’ the flow rate down to 7.5 litres/minute. Which wouldn’t be very innovative at all.

But I was not disappointed. The starting flow rate is 4.5 gallons (11.25 litres) a minute and the Nebia uses just 0.75 gallons (3.4 litres) of water over the same time period. For anyone who has actually showered under a flow rate that low it’s not something that you want to be spending US$399 on. So the trick is how to make the shower satisfying and an aspirational purchase, whilst at the same time ensuring it is effective in wetting and rinsing the body. Otherwise, any flow rate deduction is likely to be offset by increased time in the shower thus negating any savings. It took Nebia over five years to meet the above criteria but they reckon they have now cracked it.

There’s loads of fabulous scientific blurb and cool diagrams on Nebia’s kickstarter page. So I have just picked the best bits. But wow, there are a lot of best bits! Phrases like ‘high density polymer with thermoplastic polyurethane,’ ‘computational fluid dynamics software’ and optimization for temperature and rinse-ability’ abound.

The USP of the Nebia is that it atomises water into millions of tiny droplets, using technologies from aerospace engineering to create ‘H2MICRO™ technology’. As each droplet has ten times more surface area than the water droplets from a standard shower, it is highly efficient at wetting and rinsing – check out the 10 second video that proves, ‘Yes, it does rinse your hair’ – as well as being more thermally efficient than a standard shower.

Regular shower nozzles, (plain orifice nozzles), produce a straight stream of water with large droplets. Whereas atomizing nozzles use pressure and geometry to control the dispersion and break up of fluid streams. The nozzles are engineered to release droplets at different sizes and speeds. At any given cross-section of air between the nozzles and the showerer, the Nebia shower comprises 100s more droplets dispersed over 5 times the area compared to a regular shower. 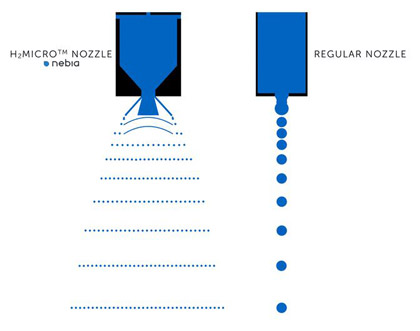 As well as being so effective at wetting, atomised water droplets are also more efficient at heating the air. In a regular shower, 97% of the thermal energy is lost down the drain with the remaining 3% of the heat transferred into the air and the showerer. Since Nebia atomises the water into millions of droplets (did I mention that already?), the total surface area of the Nebia droplets is greater than the total surface area of larger droplets emitted by a regular showerhead. Thus, Nebia can transfer 13 times more heat from the water into the environment and into the person showering. The warm droplets intermix with the air and heat a larger volume of air faster and more efficiently than a standard shower.

Of course, the million dollar question is, will it save as much water as confidently stated? I’m a bit worried by the number of punters who said the experience (as the ‘warm and cosy mist hugs your skin’) was so awesome that they never wanted to get out of the shower! I also know some people are going to look at the image at the top of this blog and all they will see is the potential for legionella inhalation from all those atomised water droplets, and will probably start to mutter about how it should be banned in the UK. (Remember you read that here first!)

But I like it. A lot. And not just because the aerospace link taps into the budding astronaut that resides within me. And do you know what the best bit is? I have a friend in the US who actually ordered on of these! So I have planned a trip to New York in May 2016 to try it out. Nebia proudly boast you don’t need a plumber to fit their shower – apparently you just unscrew the existing shower and screw the Nebia on – but just in case that’s not true I’m sure Warren will be very pleased to have me around as it drops through the letterbox.

Images are from the Nebia kickstarter pagewww.kickstarter.com/projects/nebia/nebia-shower-better-experience-70-less-water

October 2015 – Showering in a design icon