Well, obviously not actually showering with them! After all they were obliterated some 40,000 years ago and not even Mu (my mum for those new to this blog) would believe that tale from her oldest daughter. Though, as I constantly enjoy reminding her, she was very impressed with my invitation to shower in space and a bit embarrassed when it turned out to be not completely true but rather a literary device. 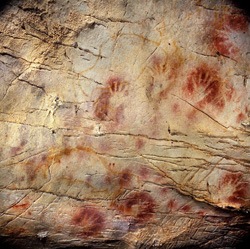 Anyway, I was in Spain recently with Suhith on a bit of a road trip. The road trip in question didn’t take in Zaragoza or the Costa del Sol both of which (for very different reasons) have major issues with water supplies, and/or wastewater disposal, and which would have also made a good blog. But in wet and windy North West Spain, most notably Cantabria, Asturias, and Galicia. What’s interesting about these three provinces (along with how green they are because of all the rain) is that in the first two there is loads of cave art. And the latter was maybe the last resort of the Neanderthals (the Rock of Gibraltar being another possible last refuge) before they were pushed off the continent of Europe and into oblivion by Cro-Magnon man. (For a slightly more in-depth analysis of what happened to the Neanderthals check out this Guardian article.)

Hand art in the Caves of El Castillo has been radiocarbon dated to be 40,100 years old. Which is enough time to have (according to many theories) been done by Neanderthal woman. They are great, as were the (relatively more modern) animals in the nearby Las Monedas Caves. 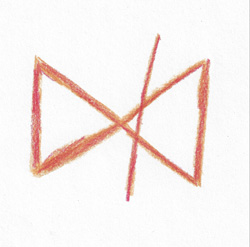 But what was of most interest to me was the enigmatic ‘two triangles”. Drawn in red ochre (as per the hands) I have reproduced them as faithfully as possible, since no photos were allowed in the Cave and none of the books on Cantabrian cave art shows them. I think it’s considered a bit boring next to the random hand outlines (which in some ways it is). Though it might be the fact that all the eminent professors who study this kind of thing have absolutely noooooooo idea of what it represents. Our guide said possibly two fishes (think kissing Gourami) one with a spear through it. Or maybe a mirror image of the mountain in which the cave was. (You had to be on your side to notice the latter, but then so are loads of the cave paintings of animals so it’s a fair enough assumption.)

But when we turn it on its side – I will do this for you since you will be reading this off a computer screen as opposed to in a cave and you don’t want to bring attention to yourself by craning at 90 degrees (especially if you are reading this while you are supposed to be emailing Gisela in accounts) – look again. 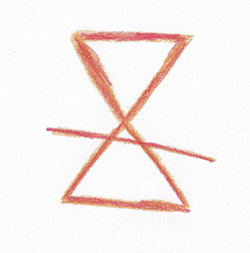 Now a further, and far more believable theory leaps off the page. That before they were smashed to smithereens by Cro-Magnon Man, Neanderthals had realised the importance of SHORT SHOWERS, and designed the world’s first shower timer!

Some of you may scoff and say. “Well if that is the case where is the sand?” But look closer. The timer has obviously been broken by evil Cro-Magnon man and the sand has fallen out.

Others may scoff and say, “Well if that is the case how come it took another 40,000 years (give or take) until AD 150 when the Ancient Egyptians invented the hour glass?” Well, I can answer that too, as if you ever doubted me.

The question ‘What did the Romans ever do for us?’, was asked while the Romans were still in power so the people knew. In Britain, the Romans were in charge from 43-410 AD. They had a wonderfully efficient system of water supplies to, and sewers away from, buildings. But once they left in the 5th century AD, it took the Brits another 1,500 years to get anywhere near their level of sophistication of plumbing systems, because once knowledge is lost it takes a random series of events to find it again.

Yes, Cro-Magnon man was too busy killing mammoths and installing power showers to worry about shorter showers, and so the knowledge of the Neanderthal shower timer has been lost – until now.

Note to readers. All of the above is true (expect maybe the bit about Cro-Magnon man installing power showers). That’s us – a year of showering variously – always keen to educate our readers, whilst at the same time keen to point out any possible departures from the complete truth.

September 2015 – Showering with the Neanderthals