First, an apology to regular readers of this blog.
In December 2013  I explained how I had been contacted by the MIR space station and offered to try out their shower. There then followed a description of how you shower in space, a short history of showering in space and some excellent YouTube links to astronauts (not) showering in space. It instantly became one of my top three blogs of all time. So where is the problem you ask? Well until last week I hadn’t actually realised there was one. When Mu (my mum for those of you new to this blog) said wasn’t it amazing that the astronauts were reading my blog I just put it down to an unfailing confidence in her eldest daughter (and yeah, possibly, just a bit, to her age). But, when an architect friend said how much she liked my blog followed closely by wasn’t it amazing that I got an invitation to shower in space, I started to worry.

I think of the blog as a mixture of hard proper showering facts, insider knowledge on my friends and family, lots of nerdy technical comments, plenty of cool mathematical equations, more hard proper showering facts and a dash of magic realism. As the writer (loosely speaking) I am able to distinguish between fact and fiction. In Cath’s world (© Paul Liptrot) so can everyone else. Now that world has been thrown upside down and I am awash in a sea of uncertainty. Anyway, just thought I’d share that with you as I have actually got another showering invitation!

I threw out a rather unsubtle request in the last ech2o newsletter that it would be great to have a go in what is currently the newest kid on the block in terms of environmental showering, namely recycling showers. And, unexpectedly, I got a positive result. Nick Christie MD of CINTEP said I was very welcome to try out theirs. How fab. Just one snag… the company is Australian and all their showers are in Brisbane. OK it’s not as completely inaccessible as the MIR space station (which actually stopped orbiting in 2001, but was a more evocative destination than the International Space Station) but I’m not going to be there before this blog needs to be posted. Though, on second thoughts when has that ever stopped me? (As we learnt earlier.)

A recycling shower
So how exactly does a recirculating shower work? And what does it feel like when you are under it? Well to answer the second question first … as I stepped into the recycling shower I marvelled at the fact it felt like any other shower. The pinpricks of water bounced off my shoulder, the tiles were shiny etc and I began to wonder about the statement ‘Every litre into the shower gives 3.3 litres at the showerhead’. If Laurie was still ech2o ’s favourite intern instead of harnessing tidal power in Northern Ireland we would have had great fun unpicking that statement to make the maths work. But as he isn’t I will just have to do my best.

The flow rate at the shower head is 9 litres/minute for the duration of the shower. Apart from three litres of water required to start the shower off, that 9 litres is made up of 2.7 litres from the cold supply and 6.3 litres recycled greywater from the shower. Luckily that 6.3 litres isn’t straight out of the shower tray up a pipe and back over your head, which is probably taking recycling a bit far even for me. Basically it is cleaned and heated before it’s mixed with the incoming cold water and starts washing you all over again. Cleaning is via a series of filters and a subsequent heating of the water to pasteurise it. The second filter is a hydrocyclone. I asked Dan Fisher (ech2o’s go to international man of mystery) whether he heard of one and did he know how it worked? Quick as a flash he told me that a hydrocyclone classifies, separates and sorts particles in liquid suspension based on the ratio of their centripetal force due to fluid resistance. Well thank you Dan the man, now we all know and can move swiftly forward. 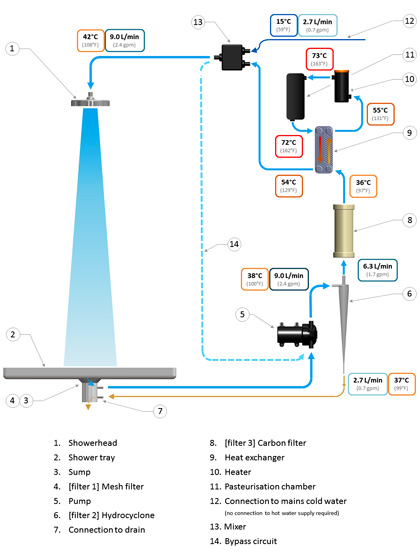 Although the recycled water has to be heated to 73OC to ensure complete pasteurisation, it goes into the pasteurisation unit at 55OC. This might seem like magic given the fact that when it exits the shower tray the water temperature is only 37OC. But, as with all magic tricks, there is a simple explanation, (or an explanation anyway). In this case it’s the use of a heat exchanger which lowers the exit water from the pasteurisation unit from 72OC to 54OC whilst heating the incoming used shower water from 36OC to 55OC. Genius. That recycled water now heads to the shower mixer at 54OC, mixes with cold water at 15OC and leaves the shower head at 42OC. I’m not sure what happens to the maths if you want a shower that is colder than 42OC but I’m sure the technical guys at CINTEP will have thought of that too.

So there you have it. For every one litre of water at the showerhead you need 0.3 litres of water. Instead of 162 kilojoules to heat that 1 litre of water in a conventional electric shower the
CINTEP shower only needs 50 kilojoules. So it saves water and saves carbon (with no reduction in flow rate), is coming to a store near you soon(ish) and best of all ‘You NEVER get someone else’s shower water.’ (~/*?*) What’s not to like?