I had kind of given up on receiving any half decent shower invitations when the following popped into my inbox.

I can’t read Russian, but luckily I have a friend who can. I assumed my flashing LED showerhead must have been misdirected to Moscow somehow but Gavin reliably informed me that it was nothing of the sort and in fact reads:

Dear colleague,
This is the MIR space station speaking.
We have the honour to invite you to take a shower at our station!
PS We really like your blog.

Wow! This is why I started the blog! Showering as the earth spins by outside the window. Floating about bumping into blobs of water. So I fired back a quick email saying I would be honoured in return and thought I’d do a quick bit of research – nothing like being prepared…

YouTube means there are loads of great videos out there to watch. So I could find out how to wash my hands in space and how to sleep, brush my teeth, drink and go to the toilet. But not how to shower.

When the Apollo 11 astronauts went to the moon they didn’t shower at all during the entire eight day missioni. And showering as you orbit the earth at 17,000 mph is not completely straightforward. Because of the lack of gravity water doesn’t behave as it does on earth, so you can’t stand (or even float) under a shower head with water drops coming out of the shower and falling onto you. You have to use a different method.

In the days of Skylab (1973-1979) there was a real shower for crew members. Astronauts floated into the shower, pulled up a curtain, sprayed themselves with water and dried off using a vacuum hose that sucked the water off their skin. Ok so not quite as romantic as I had hoped but I can cope. 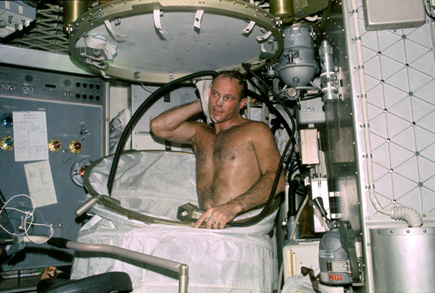 But it seems I stared the blog thirty years too late, because, on the International Space Station, astronauts shower using a squirt gun that shoots water onto a wash cloth, and a special rinse-less shampoo to keep their hair clean.

I guess it’s sensible. Water is heavy (1m3 of water = 1000 litres = 1 tonne) so it isn’t the best thing to take into space in large quantities. It used to be taken up on the shuttle to ensure the space station had a constant supply, until it was realised that for trips to Mars a different solution would be required and best to start experimenting right now. So since 2010 as much water as possible is recycled and used again. Currently the space station reclaims 93% of all the water used and produced, including (readers of a nervous disposition may wish to look away now) the sweat the astronauts produce when exercising and their urine. In a video explaining how the recycling system works the astronaut proudly explains the system recycles 6000 litres of water a year. Sounds impressive until you do the maths and realise its only 16 litres a day. For a crew of at least three. No wonder the damp towel method is now the preferred solution.

Or, as the MIR astronauts might say… showering in space is

I will be back in 2014 to report in more detail. But having watched Gravity, I am off to work on my abs in case we get zapped by space debris and I have to carry out emergency space manoeuvres in shorts and a vest.

i. They probably didn’t change their underpants either.