First things first, I wasn’t on a tropical island under a beachside shower. But it wasn’t cold and stormy Britain either. Though it was technically still British soil as I was in Gibraltar – a business trip with the benefits of sun and sea, so can’t complain!

All buildings in Gibraltar have two completely separate water supplies. Salt water for WC and urinal flushing and potable water for all other purposes. The potable water supply is desalinated seawater. And desalinated to within an inch of its life.  The soap lathered up in a slightly strange way but not anything I could particularly put my finger on. And when brushing my teeth the water didn’t taste any different to standard tap water. I mention this because if I hadn’t known it was seawater, I wouldn’t have guessed. The only other time I have showered in desalinated sea water was nearly 20 years ago when I was staying in a beach hut in the Sinai. The water there was definitely still salty; brushing teeth wasn’t pleasant and in the on-site restaurant tea and coffee had to be made with bottled water.

There are two ways to get rid of the salt in seawater. You can boil the water and collect the evaporated runoff (distillation) or you can force the sea water through membranes that are so fine none of the salts get through (Reverse Osmosis or RO). The Sinai water had been desalinated using a solar still, which at that time was quite low tech technology. The water in Gibraltar is desalinated using RO which gets rid of everything in the water apart from some atoms, some metallic ions and some dissolved salts. It uses less power than distilling seawater. But, it still takes between 3.5 – 5 kWh of energy for every 1000 litres of water produced, compared to an average of 0.6 kWh of energy in the UK which gets its water supplies from rivers or underground aquifers.

Gibraltar has been using desalinated water since 1885. Until 1991 the water supply was supplemented with rainwater collected from slopes on the rock. (There was the remains of a massive one on the slope directly behind our hotel). However that didn’t give complete security of supply and at times the country was reliant on tankers of water shipped from the UK or Morocco. (The political situation with Spain means there is no pipeline between the two countries, crazy as that may seem.) So they increased the number of RO plants and are now fully reliant on that method. 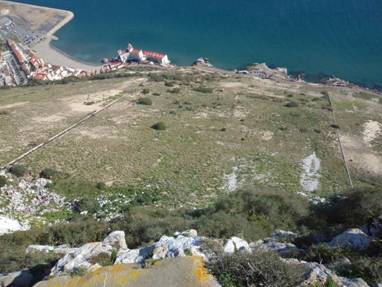 Once treated the water is pumped to, and stored at, the top of the rock. This means that the water pressure is extremely high – approx. 7 bar to most buildings. That’s was apparent on my first day in the hotel when I knew nothing of the above. The water came out of the shower head at such a rate (easily 15 litres/minute) I just completely assumed that it was a pumped system.

So lots of water with a high carbon load. But Gibraltar is on the southern coast of Spain just across the sea from Morocco, so surely the water is heated by solar thermal… Well actually no (though it is something the Govt of Gibraltar is looking into). And to make matters worse, as Gibraltar has no natural gas supply, hot water is heated by electric immersion heaters. With no renewables on the island and no gas powered generating plant, electricity is currently generated using diesel generators which are in dire need of replacement. We couldn’t find an actual concrete kgCO2/kWh figure for the electricity in Gibraltar but I expect it’s at least 0.8kgCO2/kWh.

So, all in all, my showers in Gibraltar used twice as much water and were sixteen times as carbon inefficient as the ones I take at home!  Blimey, now I’ve done the sums I almost feel guilty that I washed when I was there…Still as ever, they were only two minutes long and treating the wastewater from my shower used far less energy than the UK because (along with the water from toilets), it all just flows untreated into the sea!  Of course, I’m not recommending that as the best solution for sewage treatment, merely reporting a fact. Many years ago I experienced at first hand swimming amongst poo in the Med, something I wouldn’t care to repeat – but (as I may have said before), that tale is for a different blog in another dimension.