Finally, (and not withstanding last minute visa panics and cancelled flights at great expense) a shower blog from my favourite country, India. We are staying with friends in Delhi, or to be more precise Noida, the urban sprawl in Uttar Pradesh to the east of the capital. Sapna and Samir (as is common in Delhi) have an electric water heater in the bathroom providing hot water to some taps on the wall with a shower attached. It’s not a thermostatically controlled shower, so, as this is India, I am using the time-honoured method of taking a bucket bath. Samir wouldn’t understand – why am I being so old fashioned when they have a shower? But I cannot do my efficient showering method of ‘get wet – turn off – soap up’ etc. So bucket bath it is.

I love bucket baths. I first went to India when I was 21 and had never used showers (apart from communal ones after swimming). Here was a method that of bathing that seemed eminently sensible. Stand on a tiled area, fill a large bucket with hot water, take a small plastic jug and pour some water over you to get wet. Soap up and then use the same method to rinse off. All sorted with a minimal amount of water.

As I said, the water is heated using electricity. That’s working well right now but once the temperature rises into the 30s and 40s and everyone cranks up the air con, power cuts are common. The carbon load of the electricity in India is one of the highest in the world at greater than 0.9kgCO2/kWh of electricity. (That is clearly shown in the map below from www.shrinkthatfootprint.com.) 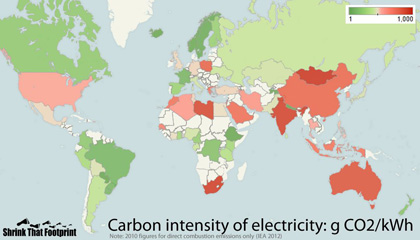 The carbon content is so high because (and these are Dec 2013 figures so hot off the press) most of India’s electricity (59%) is produced by burning coal, a fossil fuel with a high carbon load. Its also because many of the power plants are old and inefficient. Next up is hydro at 17%. There are a lot of controversial hydroelectric projects in India. Probably the most famous is the Sardar Sarovar Dam on the Narmada river in Gujarat. Arundhati Roy has written a fabulous polemic of the struggle against this and other big dams in her essay The Greater Common Good which I cannot recommend highly enough. Next come renewables (small hydro projects, wind, solar, tidal, biomass and urban & industrial waste power) at 13%. Gas is 9% and nuclear just 2%.

The water in Delhi is delivered intermittently, 3 hours in the morning, three hours in the evening. So most houses/flats/ have a cold water storage cistern on their roofs to store water in when it comes. Kanchana (another friend who lives in Delhi) infamously saw a monkey sitting in hers one day, which put her off using anything other than bottled water for months! Most people have a dedicated water pump to ensure that when the water is flowing there is enough pressure to get it up to their roofs.

Delhi is very sunny (smog and the monsoon excepted) but Sapna and Samir don’t have solar thermal panels on their roof. When I asked them why not they looked a little nonplussed. There is certainly a marked lack of solar thermal on Delhi’s roofs, so its not as though they are alone in their choice.

I use 10 litres tops using the bucket bath method, which is 75% of the amount of water I use in the UK. The carbon load to heat each litre of water is five times as high, but the bucket is a tasteful clear white plastic manufactured to ISO 9001 and belongs to ‘the age of plastics – the era of polyset’ so that makes me feel so much better. Also, the water comes from the Yamuna so no requirement for desalination. My showers in Gibraltar were 16 times as carbon inefficient as the ones I have at home in the UK. Overall my bucket bath in Delhi is only about 4 times so not that bad after all.