Still in India and desperate to leave the Delhi smog and unseasonably cold weather behind, we headed for Rajasthan along with 25% of the foreign tourists who visit India every year. Rajasthan is the largest state in India and also the driest, especially in the west which is where we went. This part of Rajasthan borders on the Thar Desert, and rainfall averages just 313mm a year (210mm in Jaisalmer the most westerly city). Not only is there limited rainfall there are also no rivers and because underground aquifers are brackish or at great depths irrigation systems are rare. 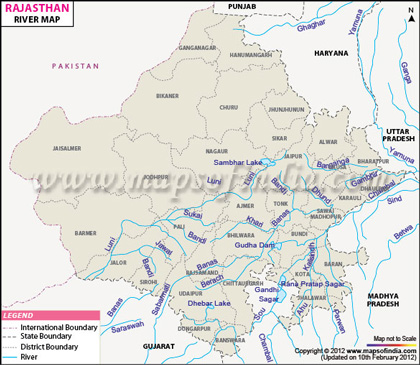 Delhi too has limited rainfall (617mm a year, about the same as London) but it gets its water supply from the Yamuna, the main tributary of the Ganges and a major river in its own right. The difference in available water is clearly seen through the train window; as you leave Haryana’s lush green fields of wheat, mustard and barley (amongst others) behind and head west, there are a few fields of rain crops, (such as bajra, jawar, motif and til) interspersed amongst bare rocky soil, scrub like vegetation and the ubiquitous Khejari trees.

Jaisalmer is 600km from the sea so desalination is not an option. Water resources for the population are reliant on groundwater supplies and water supplied via the Indira Gandhi canal. Aquifers under the Thar Desert are deep, (between 45 to 70 m and then at a further depth of 125 to 160 m), many are contaminated with fluoride and some are highly saline. The Indira Gandhi Canal was completed in 1987 to ‘green the desert’ though that particular aim has long been abandoned and it is now used mostly for municipal water supplies. Jaisalmer has a piped water supply for 80% of the population, but water is available for only 1-2 hours per day, mainly because of leakage losses (estimated at 40%) and low and unequal network pressure. So, as with Delhi, anyone who can afford it, and especially the hotels, have their own pumps and store water on the roof. The unserved areas are mainly the slums and fringe areas. Profuse leaking from the network in the fort area is causing severe degradation of buildings and the fort walls and foundations. The nearby Dalba groundwater field supplies 3 Mega Litres Day (MLD) into the system, and another 5 MLD comes from the Indira Gandhi canal which is 34 km away. 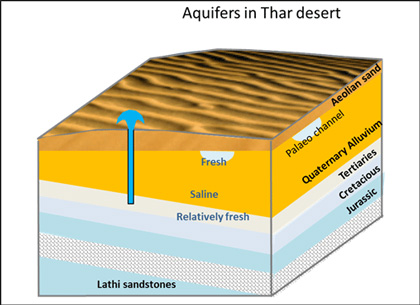 The tourism industry generally overuses water resources with its insistence on high end hotels, swimming pools, golf courses, lawned areas, and high personal use of water by tourists. This often results in water shortages and degradation of water supplies, as well as generating a greater volume of waste water and is a common problem in many areas of the world. It won’t surprise you to know that we (Suhith and I) stay in small hotels when travelling, so none of the big issues related to posh hotels can be attributed directly to us, but we still have an impact, just by being foreign tourists who might stay in such a place.

We didn’t stay inside the fort, a lucky choice as it happened, given the sewerage issues. A piped sewage system was installed inside the fort in 1994 but does not function well, and blockages, leakages and overflows are frequent. They all contributes to the deterioration of the fort structures as well as creating a public health hazard. There is no sewage treatment, and wastewater collected by the system accumulates in a low lying area just outside the main entrance, which has become a major mosquito breeding ground. Our hotel was on the outskirts of the town (just a 15 minute walk to the fort) and had its own septic tank, which given the sandy nature of the soil worked well, so at least the wastewater from our shower wasn’t an issue. But the hotel, even though built within the last seven years, didn’t have any solar thermal.

The overall environmental impact of my shower was therefore far greater in Jaisalmer than in Delhi. Not only is water supply an issue but my impact as a tourist is greater. In Delhi foreign tourists are less than 0.03% of the population load whereas in Jaisalmer (population of 78,000 and a foreign tourist load of 105,204 nights in 2010) I am one of a 1% loading during the tourist season. It might not sound a lot, but my impact on the local water supplies is probably five to ten times as much. Good job we were back in Delhi within the week and, as the sun had finally arrived in the capital, it was a result all round.