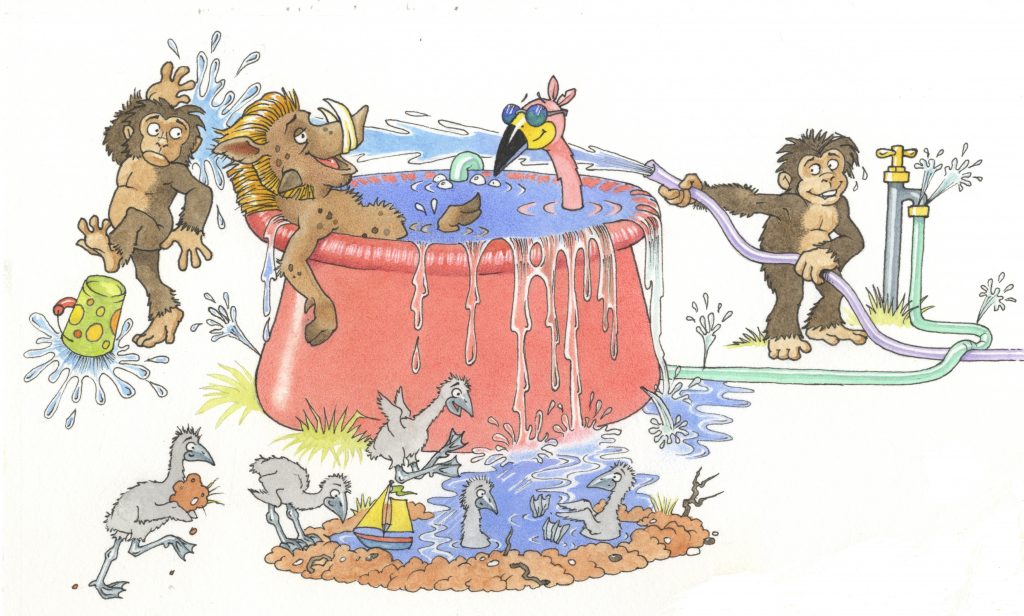 Due to Corona virus the zoo animals were currently looking after themselves. Apart from the gorillas, Warren the warthog and Frankie the flamingo’s rather annoying cousin Florence, who had found the deepest, leakiest paddling pool ever invented to wallow in, it was all going pretty well. 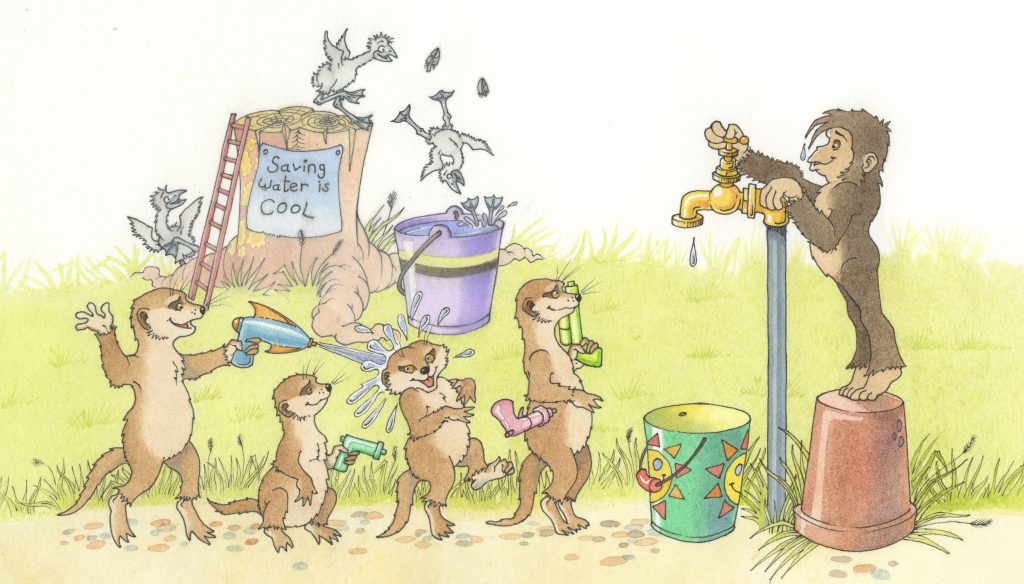 Meanwhile, Frankie the flamingo and Clarence the crab were sitting in the ‘Big Cats’ enclosure soaking up the sun. Frankie had finally decided she should get round to fixing the toilet which was making funny gloopy sounds whenever it was flushed, but right now she was a bit busy… 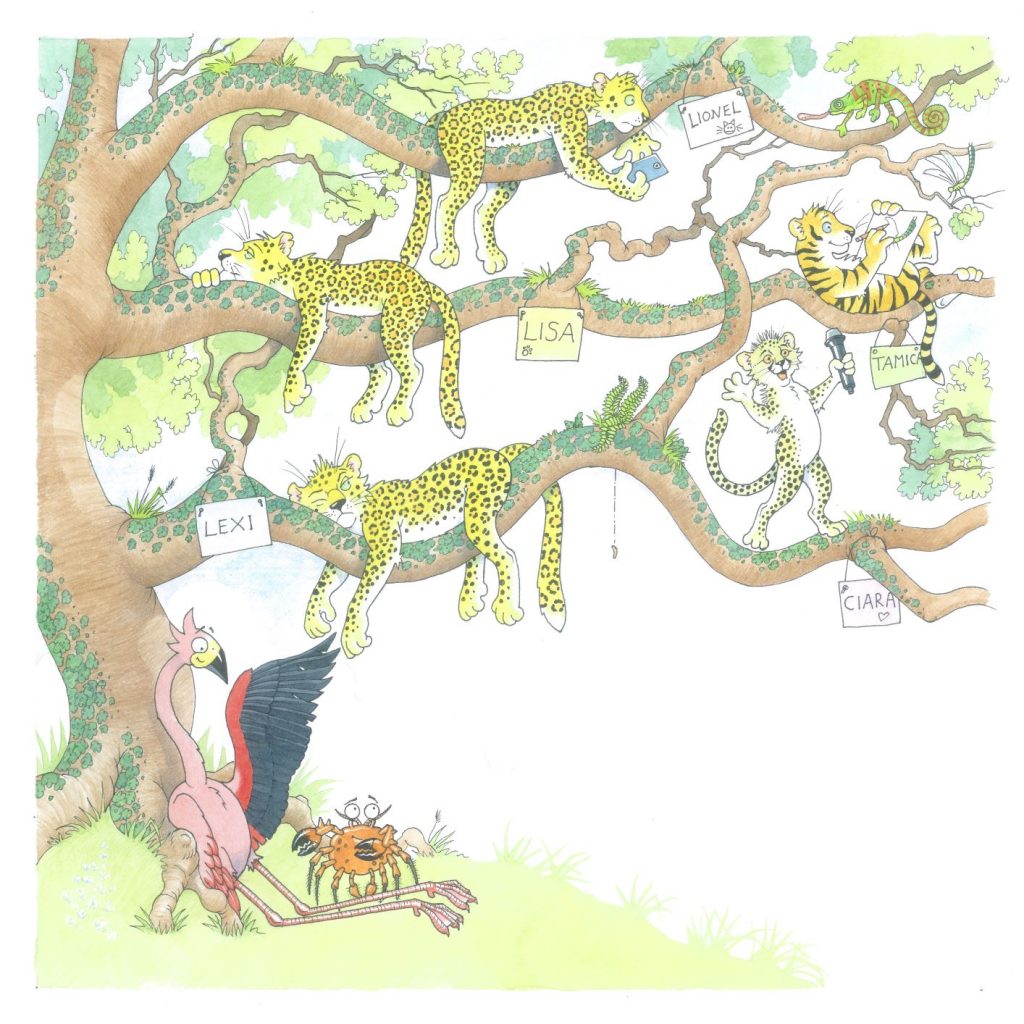 “Do you remember when I said that the best way to stop you getting poo on your head when it rained was that either we all should all stop pooing or that you should go on holiday to Spain?” giggled Frankie? “Yep,” replied Clarence, very engrossed in sorting out his surgical mask. “I do.” “And then do you remember I came up with another idea which was to stop the rainwater getting into the drain in the first place and that was the one you chose?” continued Frankie excitedly. “Yep”, replied Clarence, wondering whether he should make himself a cloth mask instead.  “And then”, continued Frankie I remembered all the brilliant things the zoo was doing to collect rainwater and using it for all sorts of things, like filling up my flamingo pool, washing the baby gorillas, and watering the tomatoes?” “Yep”, replied Clarence wondering whether Frankie understood quite how big 2m distance actually was, what other PPE he should get, and where exactly this conversation was going. “Well … how about using the rainwater to water those sunneryflower things?”

“???****!!!” replied Clarence, now very confused. And then he remembered. Two days ago when he had been trying to persuade Frankie to solve the mysterious case of the frog in the toilet cistern, Frankie had shown him her latest idea for a TV script called ’Five things you didn’t know about sunflowers’. It went like this…

They grow on the sun. That is why they are called sunflowers.

The sun is very very hot and your rocket would melt if it got too close to the sun.

They need a lot of water because the sun is very very hot.

The astronauts who pick them would burn into a tiny crisp because the sun is very very hot, over a billion degrees. 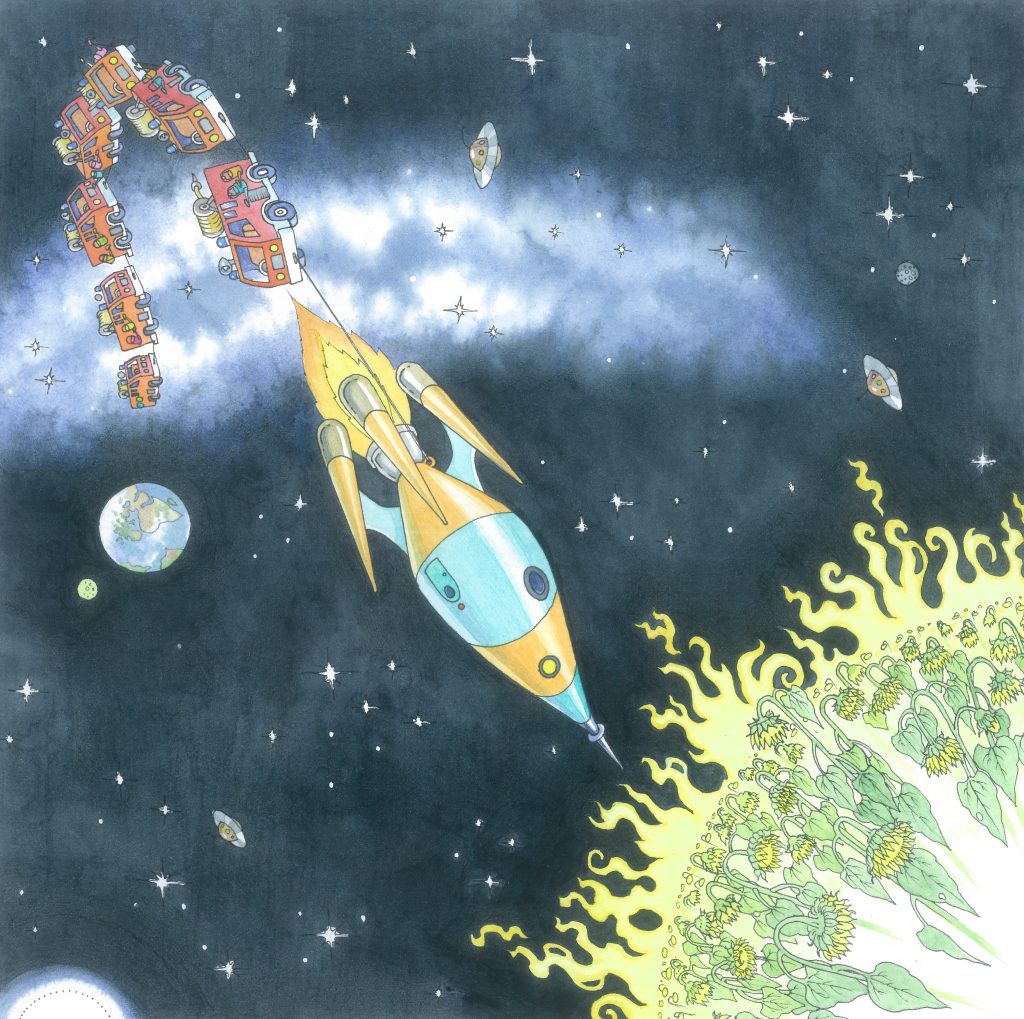 Frankie stopped writing. All in alI, the sun didn’t sound the best place for flowers to grow. “I shall have to investigate!” she announced and skipped off. “But the mysterious case of the frog in the toilet cistern!” wailed Clarence. “When are we sorting that?”

Frankie was tired and a bit hot. Investigating was fun but her head was full of spaceships and whether a flamingo could really properly fit inside one and that maybe she would need to persuade Clarence to come and help with the controls. She sat down for a rest. “Owzzzzzz” said a muffled voice from somewhere underneath Frankie. Frankie jumped up again, shook out her feathers and with a buzzzzzzzzzzzzzz a rather crumpled bee appeared. 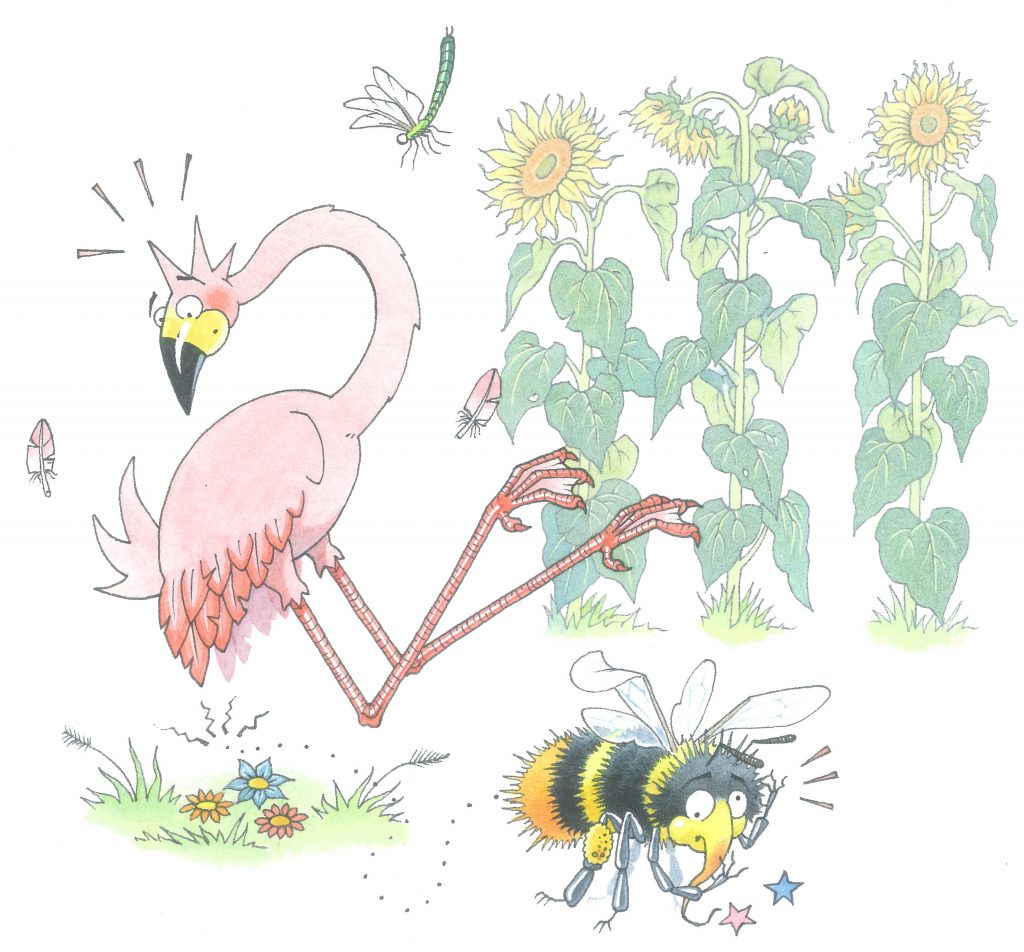 “Oh hi Beyoncé”, said Frankie. “Where have you come from? And why are you all squashed?” “Well I was just minding my own business collecting pollen from a sunflower and you sat on me!” exclaimed Beyoncé the bee. “You mean …” gasped Frankie in a super excited way, “you have just plummeted back to earth in a space capsule after a trip to the sun?”

Beyoncé the bee looked at Frankie the flamingo and wondered if things could get any worse… She was crumpled, had a massive headache, and now this fool of a flamingo was talking about rockets and splash downs and… “Well Frankie”, replied Beyoncé in her best explaining voice. “I haven’t been to the sun, I haven’t even been to the moon. I just came to get pollen from this sunflower and… Oh. Now I get it!” Beyoncé started to laugh so much she collapsed into a puddle of water and Frankie had to fish her out. 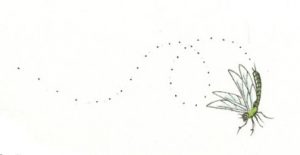 “Let me explain! Let me explain!” squeaked Denzil the dragonfly as he did a few acrobatic twirls. “Ahem”, began Denzil as he practiced his best explaining voice. “Sunflowers don’t grow on the sun. They grow in the ground on Earth.”

Frankie tried to ignore Denzil as she always did but had to admit that maybe he had a point. After all, she herself had thought it was a bit hot for sunflowers to grow on the sun. But there was still the burning question over their name… “So, she replied a bit crossly. If that is the case why are they called sunflowers then? Why not earth flowers? Or ground flowers?” “I’ll show you.” said Beyoncé. “If you can get us to France that is”. “Sure.” beamed Frankie. “No problemo.”

Frankie, Clarence, Beyoncé and Denzil were flying across a field of sunflowers. “Look at the direction they are facing” pointed out Beyoncé. “It is south.” “South it is”, confirmed Clarence the crab. “Now let’s go and have a baguette and some red wine with my French cousins” buzzed Beyoncé, “and then we will come back here after a few hourzzz.”

Frankie, Clarence, Beyoncé and Denzil were flying across the field of sunflowers again, though not in such a straight line as before. “Now the sunflowers are facing west.” announced Beyoncé. “West it is” confirmed Clarence.

“So…” continued Beyoncé, “what rises in the east and sets in the west?” “I have absolutely no idea” muttered a disgruntled Frankie, who, quite frankly, could have done with another sit down. “I know! I know!” squeaked Denzil the dragonfly as he did a few acrobatic twirls and got into ‘best explaining voice’ mode. . “It is, ahem”, the sun.” 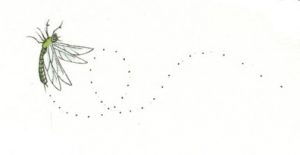 “Correct” pronounced Beyoncé. “It is the sun.” And they are called sunflowers because they are always facing the sun during the day. Frankie looked impressed by this fact. Denzil did a miniature fist pump. 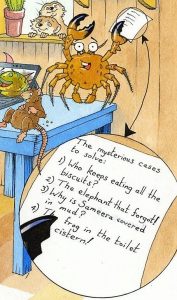 “So, now we have sorted out precisely why sunflowers have their name maybe we could solve the mysterious case of the frog in the toilet cistern?” asked Clarence tentatively waving the uncompleted list of mysteries around. 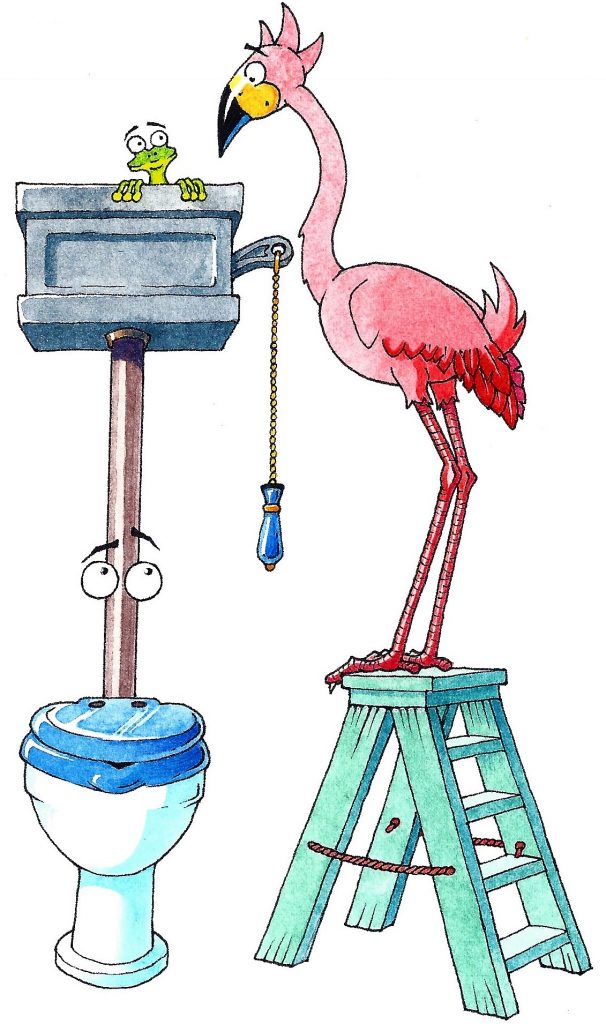 “Hi.” said Frankie politely as a small green face with detached eyebrows poked its head out of the toilet cistern. “I was just wondering whether you actually need to be in here because every time someone flushes the toilet, it makes a rather strange gloopy sort of sound.” And then, realising she had forgotten her manners continued. “I’m sorry. I’m Frankie the flamingo and this is Clarence the crab, and we are trying to solve the mysterious case of the frog in the toilet cistern, which is, basically, who are you and why are you in here?”

“Well Frankie,” replied Eric in his best explaining voice. “The flamingoes have taken up all the names beginning with F and I rather like the name Eric. It kind of matches my croaky voice. Eric, Eric” he added by way of explanation. Frankie still wasn’t convinced. It went against everything she had ever learnt about names, and despite the fact she had to admit it was quite cool when Eric went “Eric, Eric” she could see it causing a lot of confusion in the future if everyone just took whatever name they wanted!

However, there was a mystery to solve so she’d better crack on.

“Um, ok… Eric” said Frankie in what she hoped was a convincing manner, “Clarence and I were just wondering whether you had to be in this toilet cistern.”

“So was I”, replied Eric. “I am just scoping it out really. We need a place to live as our pond is now mostly mud and that doesn’t really work for frogs. And even less for tadpoles. When I was a tadpole, there were so many ponds. But now there are less and less.”

“Oh!” interrupted Frankie. “Where have they gone? Have they just moved?” “Well Frankie” replied Eric in his best explaining voice. “Ponds don’t move but they dry up if there isn’t enough rain, or if it’s really hot and sunny. So I came out to search for an alternative. This toilet cistern is nice and wet and although it empties sometimes it fills up quickly again. Mind you it is a bit small for my family.”

“Do they all begin with E?” asked Frankie hoping for some sort of order even if it wasn’t quite the one she was used to. “Oh no! Not at all!” exclaimed Eric. “My wife is called Mu and we have four kids and their names don’t begin with F or T. We’re a kind of an anomaly.” “An Omaly?” gasped Frankie. “Is that made from eggs?”

“No, no Frankie”, replied Eric in his best explaining voice. “I think you are thinking of an omelette.” 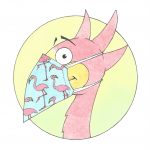