I have a good friend who lives in Brighton (hi Paul) who put in an oversized solar thermal system as he wanted to maximise his collection of hot water from the sun and then despaired when he realised (thanks to a fab bit of monitoring kit) that he was only getting 750 kWh of solar energy from it a year. Average savings are quoted at 1500 – 2000 kWh so although there was only two of them in the house he had expected it to be at least 1500 kWh. He wondered if there was a fault with the system but it was working perfectly. Apart from one small problem. Both Paul and Marianne have short (very short) showers. Collecting all that fabulous hot water from the sun and never using it! What to do? And then they (I almost wrote he there which would have been a first surely?) had a baby girl and Paul is made up and just waiting for when she hits thirteen and starts to rebel by spending at least an hour every day in the shower. At which point the solar thermal system will finally come into its own!

How to make your own solar shower

It’s really simple. You need a black hose, as long as possible. Put one end of the hose into some warm water to make it pliable. Push a bit of 15mm copper tube into the softened end and secure it with a hose clip. Fit an isolating valve (lever ball valve is best), a bit more copper and a shower head. Connect the other end of the hose to a tap and fill it with water. Lay it out in the sun. For quite a while. (The sunnier it is and the longer it lies there the better). The water inside the hose gets lovely and warm. (It can also get quite hot so be careful as there is no way to lower the temperature as no cold supply.) Turn on the tap. You get a fabulous hot shower. Until the plug of hot water disappears and then it’s a cold one again – brrrrrr. Each metre length of hose pipe holds less than half a litre of water that’s why you want the hose as long as possible.

Meanwhile, here’s one I made earlier… 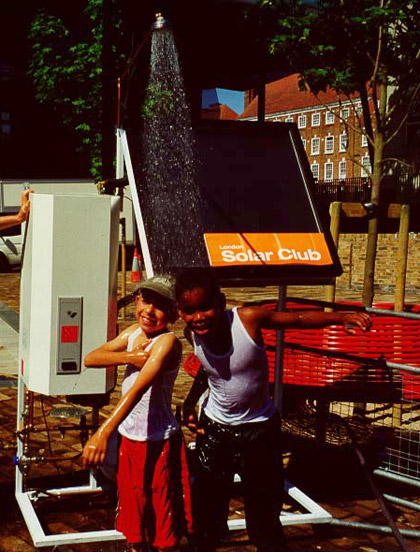 This one is somewhat more sophisticated. It was in 1998 in front of Peckham library before it had its makeover and won the Stirling prize for Architecture, in a rundown public space typical of that era, at the launch of London Solar Club. It had 1m2 of collector and 50 litres of stored water, and as the panel is above the cylinder it had a pump. We got it up to about 50 degrees C just by being out in the sun for a few hours. I had hot and cold going to the shower head so no chance of scalding anyone. We had Michael Fish under it first and then these two lads who were roller skating round nearby asked me if they could have a go. Of course I said yes, but who knows what their mums thought when they got home!

The showering police – a missed opportunity

I may have blogged before about the fact that I am never able to catch any visitors out at ours re wasteful showers as just about everyone and their aunty knows I am the shower police. But early in May we had two twenty-somethings staying from North America (Manesha, Canadian, and Matt from the U-S-of-A) who hardly know me and so would be perfect guinea pigs. Our average daily water use for the week jumped from 130 litres to 257 litres. That might not sound too bad except that they were only here for 5 days. A quick bit of math’s extrapolation later, they used 180 litres a day between them which apart from a couple of WC flushes each was all about showers. Manesha was in and out of the bathroom very efficiently so I can confidently reveal that Matt (in true American style) was using at least 120 litres for every shower he took. That’s over seventeen minutes under the shower at our shower flow rate of approx 7 litres/minute. ‘That’s Awesome’ as Matt would say. ‘But not in a good way Matt’ as I would say.

A tenuous link to showering

In my last blog I lamented the fact that Laurie was no longer at ech2o because he is now in Belfast harnessing tidal power. Unfortunately, in the world of ocean renewables research, l had unwittingly made the worst possible gaffe of all. It is not tidal power at all Cath. He is harnessing WAVE POWER, or, to put it another way, POWER from WAVES. After feeding him tea and cake, asking lots of intelligent questions about his most recent research, knowing that you measure the height of waves from peak to trough and then plying him with more tea, I think I have finally atoned for my error. Phew. But it was a close call.