This particular blog has been a long time in the making, almost a year. But it has finally arrived and the world is a better place for it…

85% of UK households have a shower; (this includes showers connected to bath taps.) And 52% of all showers sold in the UK are electric showers. I have blogged occasionally about electric showers and my encounters with them which, thankfully, are few and far between. There are lots of things I don’t like about electric showers; their puny flow rate, their high carbon emissions for that self-same puny flow rate; the fact you can’t turn them off while you soap up and then turn them back on again without getting scalded; their inherent ugliness (a box on the wall in the bathroom basically. But what I dislike most about them is the fact that they are bought by unsuspecting consumers or specified by technically inept (I mean ‘technically inept’ in the best possible way here so as not to upset 50% of my readership) architects. The perceived wisdom is that electric showers are easy to fit, will outperform the current shower or are the only choice in a loft conversion.

Of course, instead of ‘puny flow rate’ I should have said ‘water efficient’ because they are certainly that. As electric showers heat the water instantaneously their flow rate is limited. The first electric showers available in the UK (back in 1972) had a 5 kW heater, and the maximum flow rate at any significant heat was less than 3 litres/minute. Now the most powerful electric showers are rated at 10.8kW and provide a flow rate of 4.9 litres/minute at 40OC, increasing to 5.9 litres/minute if you are happy with a lukewarm shower. As these flow rates are so low, and in an attempt to increase the satisfaction factor of electric shower users, the names just get better and better:

So why are they not simple to retrofit?

An electric shower needs to connect to the mains water supply and (obviously) requires electricity to work. The mains water supply is usually easy as, in most dwellings where these showers are installed, there will be a mains supply up into the loft to feed the Cold Water Storage Cistern (CWSC) and Feed and Expansion (F and E) cistern; it is a simple matter to tap into it. But the electricity supply? You cannot (despite what many people assume) connect an electric shower to the lighting circuit. Nor even to the power circuit feeding the sockets. The I.E.E. Regulations require a dedicated supply from the consumer unit in 10mm2 cable protected by a 45 amp fuse! And, 10mm2 supplementary earth bonding from the shower to the shower tray or bath. Not so simple to fit now is it? The same regulations will also not permit your rather crappy shower to be upgraded to the new Airboost Max (or whatever) just by changing the box, because the cable size to the existing shower will be 4 or 6mm2. So not even easy to fit when you already have an electric shower. 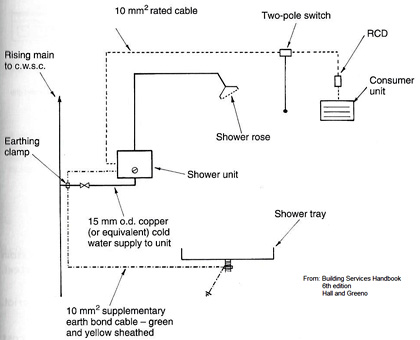 So what should you buy/specify?

Electricity in the UK is very carbon intensive. 0.52 kgCO2 are produced for every kWh of electricity supplied compared to 0.19 kgCO2 from gas. So, if your hot water is already heated by gas, it is better to install a thermostatically controlled shower fed from the hot water supply. If you have a combi boiler the pressure will be 1 bar plus and the shower will feel great, even at a regulated flow of 8 litres/minute. If you have a hot water cylinder fed from a cistern in the loft, the pressure will be 0.2 bar if the bathroom is on the top floor and the shower won’t feel so great. Its flow rate will also be lower, probably only reaching 5 litres/minute, but, in my opinion, it will still feel better than an electric shower. Yes there will still be some disruption, but all bathrooms already have a hot and cold water supply, and the CO2 emissions will be less.