‘Why does this always happen?’ I mused last week at the AECB annual conference as the shower curtain was drawn inexorably towards me. The curtain in question was whitish and the tiles were a rather unfetching light fawn but the shower controls were fab! Chunky stainless steel so probably prison issue. I forgot to take a photo so got Nicola from Archangels Architects to take one. (I mention this just to prove I still have architect friends despite my occasional, oh so subtle, digs at them, as evidenced by last month’s blog) 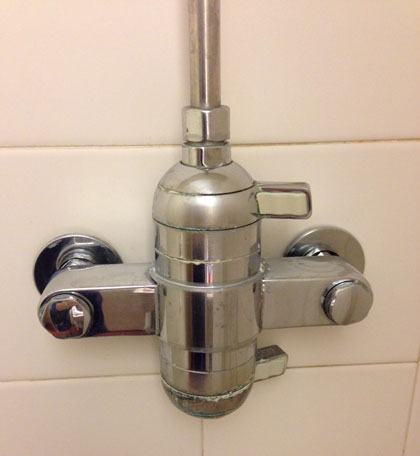 I was also impressed by the absence of mould in the shower given that it was windowless and in student accommodation. The 20 minute override on the fan was obviously doing its stuff.

The shower curtain effect is a phenomenon most of us have experienced and I had always mildly assumed that it was to do with air pressure. Warm air rises, cold air tries to take its place, can’t get past the curtain. But this blog is renowned for hard facts, not idle surmising. So, off to the internet I went, deftly avoiding the myriad YouTube videos of kittens playing with the aforementioned shower curtains. 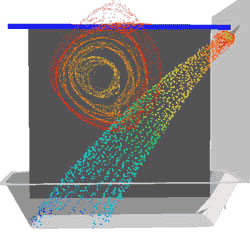 There are several theories. The buoyancy theory, or stack effect is a bit like mine. Warm air (from the hot shower) rises out over the shower curtain as cooler air (near the floor) pushes in under the curtain to replace the rising air. Apparently however, a cold shower also results in the same curtain movement, though I wouldn’t know given my lack of cold shower experience. The Coandă effect is so complicated I shall allow readers to do their own research but basically it’s the tendency of a moving fluid (the water from the shower) to adhere to an adjacent wall (the shower curtain). After that I just got lost. Then there is the Bernoulli effect. Her (OK, his) principle states that an increase in velocity results in a decrease in pressure. This theory presumes that the water flowing out of a shower head causes the air through which the water moves to start flowing in the same direction as the water. (So far so good). This movement is parallel to the plane of the shower curtain. (Though surely that depends on the shower spray angle?) So now that the air is moving across the inside surface of the shower curtain, the air pressure there will drop, resulting in a pressure differential between the inside and outside, causing the curtain to move inward. And finally there is the horizontal vortex theory by David Schmidt of the University of Massachusetts. He used a computer model to show that the spray from a showerhead creates a low-pressure zone (the horizontal vortex) next to it so that air pressure on the outside forces the curtain in. 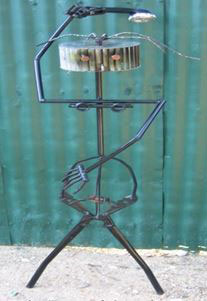 So there you have it. By way of a reward for those of you who have got this far I thought I would add this picture of Scrap Woman showering, who has made sure to negate all possibly effect or theories by using a corrugated iron shower curtain.

July 2014 – Shower curtains and not the Coandă effect