I was in Exeter last week at the Water Efficiency Network’s annual conference. Had a great time especially enlivened by:

I have already blogged about this effect back in July 2014 so won’t repeat the scientific reasoning again. Weirdly, this time the shower curtain stayed resolutely straight up and down. So, not only no Coandă effect but also no Bernoulli or horizontal vortex theory effect either… Never mind. The ashes are back where they belong and this was never going to be a blog about shower curtains anyway.

Last week I realised that, although I have written a technical article about wastewater heat recovery  I have never approached it from the showering blog angle. What an omission! So, without further ado here goes… In ‘Showering for as long as I want? – Part 1’ I blogged about the rather wonderful (and highly technical) CINTEP recirculating shower, which recycles the shower water as you use it. Just one snag. It still hasn’t arrived on these shores.

But, fear not blog readers. As one door shuts so another one opens. For those of you who are minded to take long showers (hi Lydiaaaaaa), there is still a way you can shower for longer without killing quite as many polar bears as you currently do.  And that’s by showering in a shower which captures the heat from the used shower water, known as Waste Water Heat Recovery (WWHR).

So how does it work exactly? Well maybe it’s best to start with how it doesn’t work. You don’t re-use the water so it is not a water-saving shower per se. But what it does do, as the shower runs to drain, is take the heat from the used water and transfer it to the incoming cold water – genius! 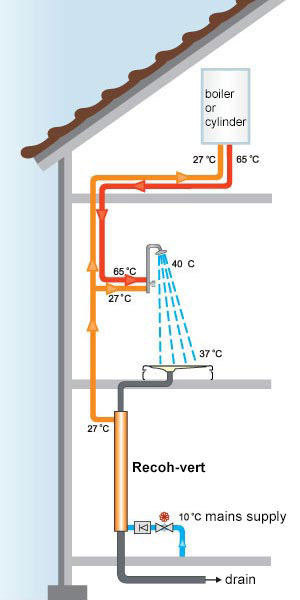 The diagram on the right shows how the system works. Water comes out of the shower head at 40 degrees C (so unlikely to be a German household). By the time it has passed over the showering person and reached the bottom of the shower tray it is still at 37 degrees C temperature. As this hot water runs through the Recoh-vert WWHR pipe it heats up the incoming mains cold water from 10 degrees C to 27 degrees C. This means that the cold supply to the shower is now 17 degrees C higher than it was, and to reach the desired temperature of 40 degrees C at the shower head we need far less (of the previously heated to 65 degrees C) hot water. Tests in the Netherlands on the Recoh-vert RV-3 have shown 62% of the waste heat is recovered with the optimum flow rate of 7.5l/min. If my maths is correct (it usually is – Ed), in terms of the amount of energy used that’s like having a 23 degrees C shower!

The only disadvantage is the 2.2 metres vertical space required between the shower tray and the outlet to drain, which means retrofit is difficult. To overcome this there is a horizontal option, which sits directly under the shower tray. It has 20 metres of copper pipe coiled within it to effect the heat transfer. It’s a neat solution but doesn’t work as well as a vertical heat exchanger being 47% efficient at best. 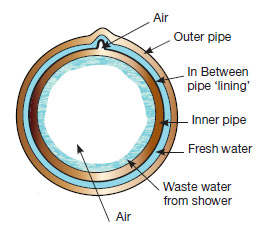 It’s worth mentioning realising that a WWHR system doesn’t work with baths as when you pull the plug out on a bath you aren’t running the tap to fill it at up the same time. Well, hopefully not. I did in fact once meet an adolescent girl who did just that! Let’s just hope she’s one in a billion…