I wish! Given the fact I have been to Glasto five or six times and never even got within sniffing distance of a shower. In fact, with minimum 3 hour queues to the only hot showers available and never seeing a cold shower this section would better be titled ‘Not showering at Glasto’. Or even just ‘Not at Glasto. Full stop.’ This year Safa and Lydia both went causing a great deal of Glasto envy in the ech2o office. Lydia and her mates had one of those solar showers (as modelled by Jake in the ech2o 2015 summer newsletter, or Mu in ‘A year of showering variously’ back in November 2013). Though they just used it cold. Safa managed to get a shower in the Greenpeace showers on the Monday. Also cold. Well at least neither of them can be accused of being ein Warmduscher.

Are you ein Warmduscher?

Well, if you want to wear a wetsuit while surfing down on the Gower apparently you are! But as I pointed out to Rossi, with a sea temperature of about 10 degrees C and me being a city slicker and all it proves I am in fact quite a hardcore Kaltduscher to get in the sea at all!

A couple of shower cartoons 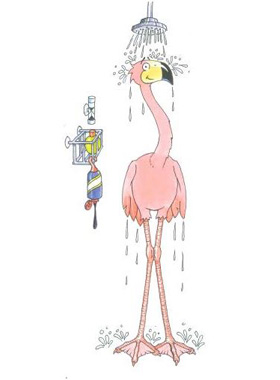 First the rather wonderful Frankie the flamingo having a quick shower after having solved the mysterious case of the sinking flamingo.

And secondly, what many of the adolescents we talk to do during their showers. 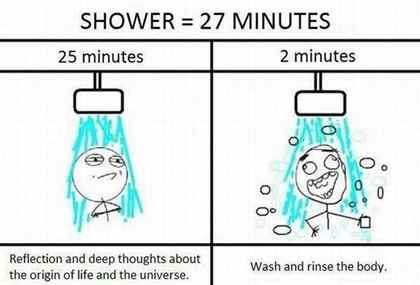 And finally some shower ‘jokes’

Be warned ‘jokes’ appears in inverted commas for a reason.

This is so brilliantly off the wall it reminds me of the white horse called Eric joke. Just as obscure but no less fabulous because of that. Even if I have no idea what it means! Maybe one of the legion of fans reading this blog can enlighten me …