I was going to blog about the efficiencies of heating hot water using an Air Source Heat Pump, (as that is how the water is heated at the ech2o offices). But to do that I had to explain why I was showering in the office in the first place which led onto the fact that Protea is moored up outside the office for a week and then I just got all excited about how we heat the water on Protea. 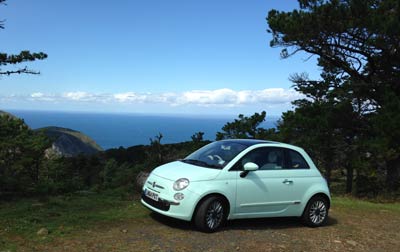 I have blogged about Protea’s shower a bit back in May 2012 but that was about pressure and flow rate. For the shower to be hot the engine needs to have been on. And whilst you can obviously run the engine without cruising it is still burning diesel. So I decided to do some calcs (Quelle surprise – stating the obvious. Ed.). Burning a litre of diesel produces 2.68 kg of CO2. Buh…limey. In Minty (my non-erstwhile Fiat 500, and who, anyway, uses petrol not diesel) that would get us about 100 km (or 30 miles). In Protea that would only get us three lock miles since she burns on average a litre of diesel every hour., Lock miles is how we work out distances on the canal network and it goes like this: three miles if no locks; throw in a lock and its two miles and one lock; throw two locks in and then geos one mile and the two locks in an hour. (It does depend on whether the locks are set for or against you and how close to each other they are but it works out pretty accurately over the course of a day.)

Then I found out that a typical modern diesel engine on a canal boat is roughly 30% efficient. This might not be news to loads of you but it was to me. I’m used to doing calcs on condensing boilers at 90% efficiency, and even the oldest gas boiler out there works at 50% efficiency. So, on Protea, of that one litre of fuel when combusted in the engine, 30% turns into actual power and the rest is wasted, – 30% out through the exhaust, 30% into the coolant and 10% radiated from the engine. To be fair it’s not all wasted since it does charge up the batteries as well as providing hot water thus morphing into a baby CHP plant!

We have a water cooled engine, which means that most of the heat is dissipated into the canal via a keel cooling tank, basically double skin of steel boxed onto the side of the boat. But at the same time there is a take off point for the calorifier (boaty mcboat word for a cylinder) that redirects some of the cooling water through a coil in the calorifier. This feed has its own thermostat so that it effectively uses the calorifier to “cool” the engine first (and thus heat water), then switches to the boats engine cooling tank (keel cooling) once the calorifier is up to temperature. Which means that the hot water heats up really quickly.

I assumed that if reduced the revs to 1,400 then the heat/power output would reduce by half as well. But thought I should check that assumption and this is where things suddenly took a turn for the worse… due to the mention of torque and the fact that power = torque x speed. Jon and Roger from the Sustainable Development Foundation were about as much help as a chocolate teapot on that front though they have subsequently claimed this is because I asked the wrong question. (We would like to apologise in advance for any loss of income or status this statement may cause the SDF – libel checking Ed.) 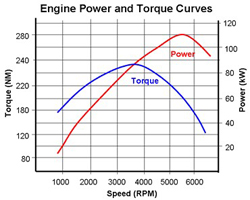 I then asked my mate Rob who told me my assumption was completely wrong, and sent me this fab little graph as well as one of his ‘robsplanations’ about how an engine works. Only when I dug deeper into the details it suddenly transpired that torque wouldn’t come into it if I was stationary and just running the engine to heat the hot water – aaaaagggggggghhhhhh!

So, dear reader, I kind of gave up at that point trying to work it out mathematically and thought I would do an experiment, albeit one with not all the parameters there. We have a tiny cylinder 50 litres at best – we used to have a bigger one but it split – that sits precariously on a shelf above the engine seemingly held up by sheer will power and a bit of pipework! 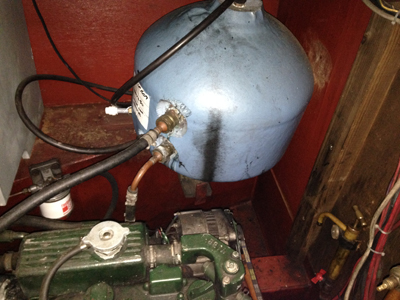 The night before I started writing the blog I ran the engine at about 1400rpm for about 45 mins and ended up with quite hot water, which I used to wash up and do a load of cleaning. But there wasn’t any hot water left in the morning for a shower. The next night I ran it in idle mode (700 rpm) for precisely 45 minutes in two separate bursts and it definitely didn’t get as hot. I did a bit of washing up and by the next morning there was the tiniest bit of lukewarm water available, with which I sort of showered – I did warn you about missing parameters!

Since the power curve is quite a straight line. I decided to go back to my original assumption that at 1400 rpm I am getting half of what the engine chucks out at 2800 rpm. Rob reckoned that the engine would be producing 25 kW at best in real life. So my following calcs are using that figure, and go as follows:

All of which leads me to believe that to get enough hot water for a shower on Protea, I need to run the engine at 1400 rpm for an hour, that this burns I litre of fuel and produces 2.68 kgCO2.And that whilst I don’t use anywhere near the 50 litres of warm water produced I need that much diesel to heat the water up enough. And since I also need to pump the water to the shower and then out of the shower tray, I shall count that all in from the recharging of the batteries that has occurred while running the engine. And so having a shower on Protea while she’s moored up produces 2.68kgCO2. Compared to 0.63 kgCO2 having one at home.

And in the office? Let’s not even go there!