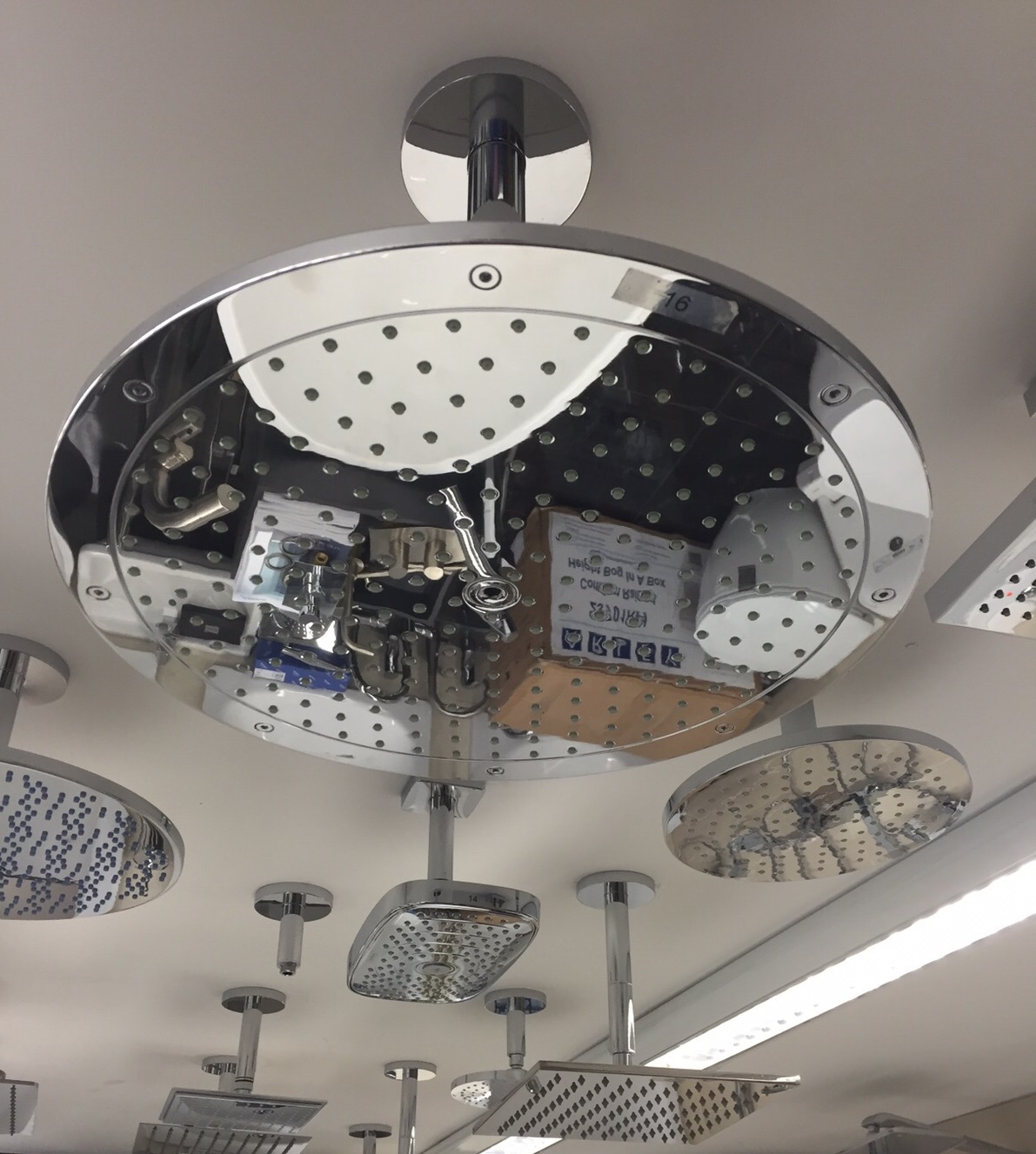 A mate of mine, Colin, owns a plumber’s merchant (EC1 Bathrooms). He sells everything from a replacement C clip for a WC siphon to toilets that cost £3.5k, from a ½” tap washer to showers that cost £2.3k. (Though he can get you one for £4.8k if you think 2 grand is a bit downmarket.) Colin has often told me I can borrow any shower head I want. The only problem is that most of the ones in his showroom are fixed head ones and can’t be fitted in our bathroom because we have a riser and shower hose set up. So my chances to date have been a bit limited. 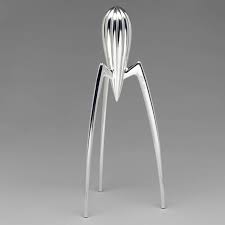 But now I am the proud owner (albeit temporary) of a shower head from the Axor Starck Organic range aka a Phillippe Starck designed shower head. Yep, the very self-same Philippe Stark who, born in Paris in 1949, is generally considered to be (according to his publicist anyway) the enfant terrible of the design sector. Best known for designing a new take on the lemon squeezer (his juicy salif) he also designs toothpicks, toilet brushes, toilet seats and toothbrushes. And now … my shower head.

In His eighteen minute Ted talk on design and destiny he answers the question ‘why design?’ I started listening thinking I would be bored beyond measure – in fact my first draft of this blog (written before I listed to his talk) had the words ‘arty farty’ appearing quite prominently – but I found it fascinating. He riffs from the cynical designer (the uglier something is, the better it sells ) to the narcissistic/fantastic designer (who only designs for other fantastic designers); from imagining the person using one of the toothbrushes he has designed, to the fact it took us four billion years to get from bacteria in the primeval gloop to where we are now and it is arrogant to think this is where we stop; from how important it is to participate in society and that the more you look up and out the more you do so to the fact that God is only the answer when you don’t know the answer. He ends with a plea to the coming generations to create a new story, and concludes, that all this is why he designs toilet brushes!

In the meantime, according to the brochure, the Axor Starke Organic range is based on the idea that its nature’s way to get by with the bare minimum. This range began with the tap which is based on a branch of a tree with some random twigs, and has a flow rate of 3.5 litres/minute (though you can boost it to 5 litres/minute if required). 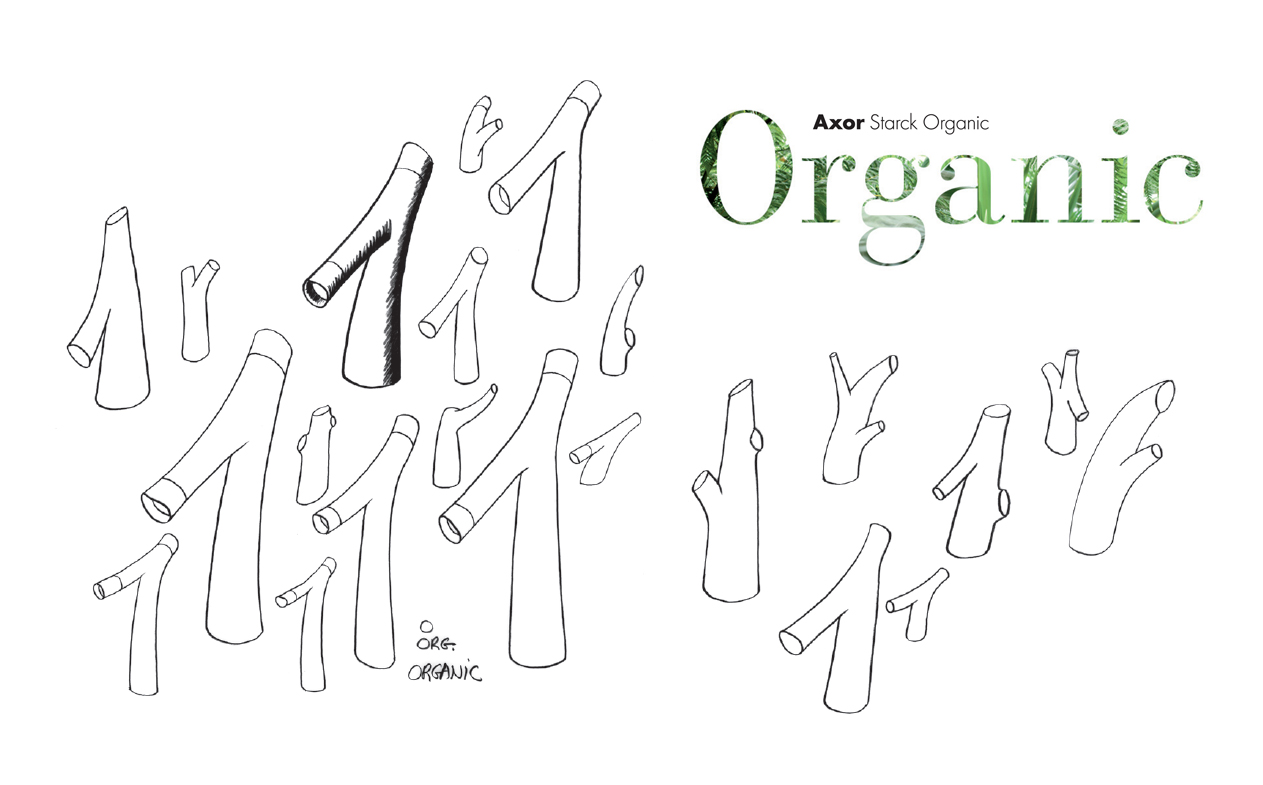 Everything else is just a by-product of the tap really. So the hand held shower head doesn’t look anything like a branch and the Stark ShowerHeaven shower (which is still part of this range) doesn’t really follow the idea of ‘getting by with the bare minimum’ going as it does up to a somewhat uncool flow rate of trente trois litres per minute… Though design wise is still something to look at. If you like squares. Which I do.

Colin scavenged my shower head from his floor standing bath filler display and I fitted it onto our shower hose (using many years’ worth of accumulated plumbing knowledge). 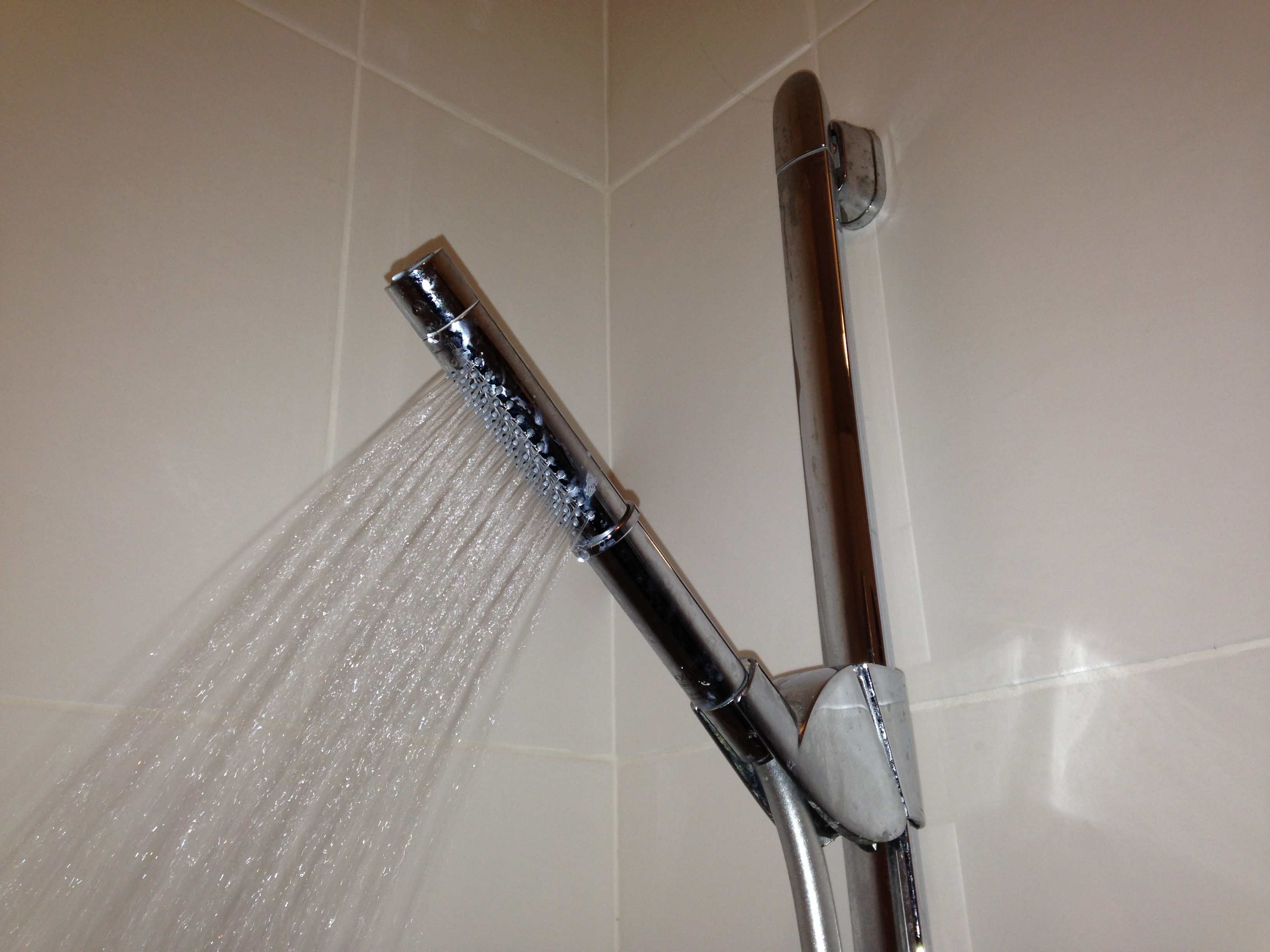 I think it’s great. It’s just so incredibly minimalist and my only disappointment is that it comes in at just £100 for the head which seems a bit cheap for a design icon to be honest. The spray pattern is really different to any other shower I have used because it’s basically a long thin rectangle! Hard to explain but the photo may help. Sticking my head under I didn’t notice anything different really to our current shower head (which I blogged about in great detail in showering trials part 1). But when I turned round to get my back wet that’s when it hit me (literally) because suddenly only half of my back was getting wet. It was a really strange feeling, although the second time I got in the shower it just seemed as though I had always showered under a thin rectangular stream of water!

But Suhith and Lydia aren’t impressed. Suhith in particular thinks it looks like someone has forgotten to fit a shower head and it looks like the shower ends with just a piece of pipe. But that is exactly why I think it looks so brilliant! Also she isn’t that keen on the fact that because our shower is over the bath and because of its angle, the spray comes too far out into the bath, misses the shower screen and ends up on the floor.

Real life – doesn’t it always get in the way of pure design? … Or “Real life – pah” as I expect Phillipe himself would say.