As a year of showering variously hits its half century (I know, I can’t quite believe it either), I thought a blog about the trepidation with which those who stay overnight at our house approach their shower would be in order. Users are faced with a selection of gizmos to highlight the fact they should be in and out of that shower pronto and I am not averse to switching between good cop and bad cop in the blink of an eye if I think they have exceeded their allotted time…

The boy Jon (now a man) was first up. His chance for a second mention in the blog following his appearance back in November 2013 when I blogged about fabulous showers.

Day 1: “The shower gets an A plus but I got a C minus”. That sentence took a bit of unravelling. But then I got it. ‘A plus’ was his view on a very impressive power performance (he is a bloke used to showering under electric showers). ‘C minus’ was his particular score on the ‘Is your shower killing the polar bears?’ rating scale.  Having never got as low as C minus I couldn’t gauge how long or how much water that might have been, and he couldn’t tell me as he hadn’t checked such incidentals! When I quizzed him on the length of time in the shower he reckoned it was because he “had a lot of paint” on his hands. I did of course point out that washing paint off his hands in the washbasin would be a much more sensible move.

Day 3: A result! Up to B on the Amphiro polar bear and approx 30 litres used as he almost met the four minute shower challenge. However, he was left with paint on his hands which he was forced to pick off after the shower so “half a shower” in his words.

Day 4: I got a text.19.5 litres. 795 Wh. Now that is certainly impressive. Mind you when we were playing backgammon that night I did notice rather a lot of paint on his arms!

My brother (aka the prodigal son) was over from Australia with his partner and they were staying at ours for a bit. Kerry works for the Broome Water Board, so conversation at breakfast naturally flowed (ha ha – Ed.) towards issues of their water supply. It is sourced from the Canning Basin a huge aquifer in NE Australia, which is recharged by direct percolation from rainfall and by leakage from the coastal dunes north of Broome. As the image below shows, there is not enough precipitation to replace all the water withdrawn and the aquifer is bring depleted at the third fastest rate in the world. Though to be fait to the residents of Broome, it’s less their profligate showering habits than the gold and iron ore mining and oil and gas exploration near the Canning Basin, all of which are very water-intensive activities. 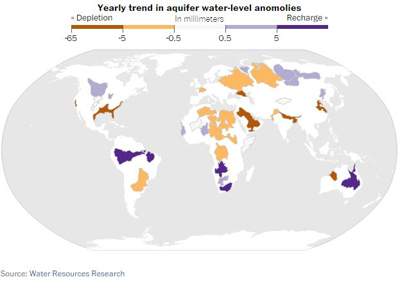 Kerry thought that the water exits the ground at 38OC, meaning that the cold water supply is not cold at all. Even I could cope with a ‘cold’ shower at that temperature, but there was nothing on the Broome Water website to confirm this. But the Great Artesian Basin of Mid and East Australia has ground water reaching as high as 100 degrees C, so it seems feasible. At these temperatures the groundwater is too hot for town water supply and for stock to drink, and needs to be cooled down before it is distributed.

The pH of the water is very low at about 4 so very corrosive. This is an issue for cast iron supply pipes (which Broome may or may not have) and copper and lead pipework within buildings. Broome adds caustic soda to bring the pH up. I was intrigued why they didn’t just add lime. Another short Google search later and the answer was revealed…Using lime can result in excessive amounts of calcium carbonate precipitation in post treatment storage facilities or within the distribution system. It is difficult to develop a uniform deposition of calcium carbonate throughout a distribution system. Deposition generally occurs close to the treatment plant and less protection is provided as the water travels further from the plant, typically where the lead and copper containing fixtures are located. One possible means of reducing the corrosivity of water while minimizing the excess deposition of calcium carbonate is to switch post treatment chemicals for pH adjustment from lime to caustic soda. Caustic soda, or sodium hydroxide (NaOH), will increase the pH of the water without adding calcium ions that are needed for calcium carbonate precipitation to occur.

Sasha and Samantha also came to stay. They gave us another rendition of my favourite poem of theirs:

And then braved the shower. Samantha started off at 27 litres. By Day 2 she proudly announced she was down to 20.5 litres. Although this was trumped by Kerry at 11 litres, for a twelve year old girl it is mightily impressive. There was no mention from Sasha of her results, so I assume they were bad! And the prodigal son? He couldn’t see without his glasses – yeah, sure…

I wonder if any of them will be back soon.