How extreme? Well 6m below sea level – extreme enough for you? Bit like the well-known extreme ironing. Those who know me well will be on a knife edge at this point. After all it is something that I would possibly do in the interests of science – after all, who doesn’t look good in a wetsuit? Or I might have blown the kickstarter campaign funds on an all-expenses paid trip to photograph flamingos in the Serengeti, via a short stay in one of Zanzibar’s floating ‘hotels’. But at the same time it’s also quite likely I would lie through my teeth about it just to get a good opening sentence to a blog. 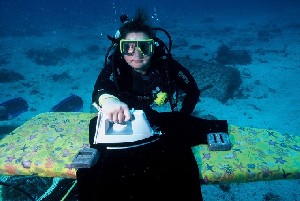 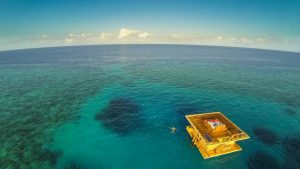 Ah my loyal fans you know me too well… I was showering in the city of Rotterdam. (I was on a WatEf field trip to the Netherlands to see how they deal with water in the city –very interesting). Over 80% of Rotterdam is below sea level with the lowest point being 6m below. So while I was really and truly showering below sea level, at the same time I was still on dry land. Clever huh? 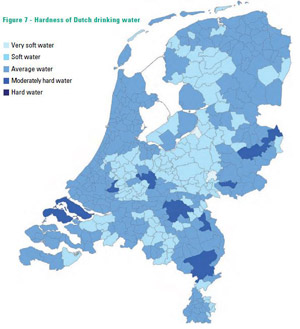 Still ‘n’ all, gives me a chance to blog about showers and the Netherlands. For a start, you will always have silky hair after a shower in the Netherlands because they centrally soften the water. So all those shiny shower rooms aren’t down to an on-site water softener. It’s not that the Netherlands is mostly soft water either, as this map shows. Just that the country realises the advantages of soft water to save energy and detergent and recognises the fact that controlling the process centrally is better for the environment. The Netherlands has been progressively softening its mains water since 1971 thus controlling the discharge of brine into the sewage system. In 1984 the Dutch Government set the minimum acceptable water hardness levels at 150ppm (compared to 320ppm upwards for hard water) which led to a sharp increase in the number of softening reactors in the country. Today, pellet softening is the main technique employed, although membranes and ion exchange are also used and by 2016 virtually all areas in the Netherlands will have met the standard. Given the issues with hard water in many parts of the UK I think it would be great if this country did the same thing but won’t be holding my breath on it. I have already bloggedabout showering in softened water in the UK for those of you who missed it.

And while I was on the web searching for a map of water hardness in the country I stumbled across the Dutch drinking water statistics 2015 as well as the fact that, the Netherlands has vacuum sewer systems! I couldn’t find out exactly where, so don’t know if my shower water was conveyed to the sewage treatment plant in that manner. A good job maybe, otherwise I would have segued off into a technical explanation of how they work… Phew I can hear some of you exclaim, as I instead concentrate on the showering habits of the Dutch.

In 2012 the average Dutch person used 120 litres of water a day with 40% of all household water use being for the shower. The corresponding figures for the UK was 150 litres of water and just over 30% used in the shower. Interestingly, this makes the actual used in the average shower virtually the same at 48 litres in the Netherlands and 47 litres in the UK. 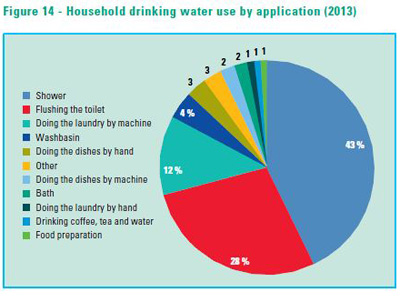 The report credits the reduction to efficient washing machines and toilets. Though there is also a 7 litres/day saving from bath use as well. The average amount of water used a day for a bath is now just 1.8 litres! Either hardly anyone has a bath in the Netherlands or the average Dutch person saves up and has a bath once every 89 days…

And then I found the showering habits of the Dutch broken down by age – result! 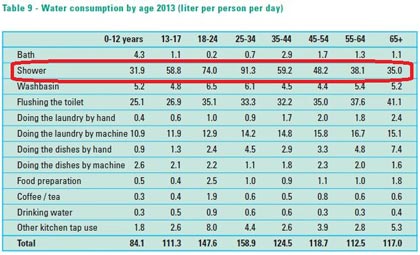 Of course I immediately checked out the showering habits of Dutch adolescents. Only to be intrigued by the fact that it is not your standard Dutch teenager who is having the longest showers, but the 18-34 year old demographic. In 2013, 18-24 year olds come in at 74.0 litres a day for showering and the 25-34 year olds at a staggering 91.3 litres compared to a mere (relative term) 58.8 litres for the 13-17 year olds. Maybe we should take our gudge theory onto the clubbing scene!