To misquote Jane Austen, it is a truth, universally acknowledged, that if you reduce the flow rate from a shower people will just stay longer under it and so no water will actually be saved.

I have always struggled with this statement, especially as it is usually used by producers of power showers or high end developers, who think that a 12 litre/minute shower is a fate worth than death, to justify the plethora of power showers available on the UK market. But as I didn’t have recourse to the research that underpinned such statements (nor any research that proved otherwise) I was always left with the rather unscientific response of: Well that’s rubbish – just because the flow rate is lower it doesn’t mean that users are going to soap up any slower, or need longer for the conditioner to work.

On another tack (but related) I was recently delivering yet another Is your shower killing the polar bears? workshop (blogged about before in March 2015 and May 2015) to a group of adolescents. I asked, as I always do, what would get them out of the shower faster. One of them said ‘a rubbish’ shower’ and a light bulb pinged on in my brain. Those of you who were with me back in January 2012 when I started this blog know that it began in Mu and Eric’s shower at the dubious flow rate of 1.3 litres/minute. Now that is a rubbish shower in anyone’s definition, and certainly not conducive to chilling out in; it also definitely takes longer to get my hair wet and rinse the shampoo out than my shower at home.

So I was pleased to recently find some academic research by ANQIP (a Portuguese organisation that promotes water efficiency) presented at last year’s WatEf conference, about the difficulty in setting minimum flow rates for showers precisely because of the effect of increased time in the shower as flow rates decrease. (All the conference proceedings can be downloaded here and the ANQIP research is Paper 5.) ANQIP set out to test at what point a reduction in flow rate does not result in an increase in water efficiency. They posited that for every individual there is a break point below which a reduction in the flow rate of the shower does not lead to more water savings because it leads to an increase in the amount of time in the shower.

The research consisted of a series of sixteen volunteers, all students, who measured and recorded the flow rate of their usual shower and the amount of time they spent in it. They then reduced the flow rate by 1 litre/minute per day until got to a point where they didn’t find it comfortable to go any lower. At that point they recorded the new flow rate and the length of time they were under it. 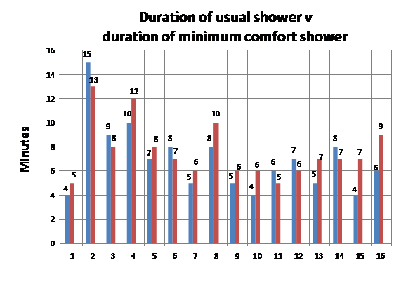 As the data set is from Portugal initial flow rates are generally higher than found in many UK showers. The range of original flow rates was 8 – 12 litres/minute and the range of the lowest flow rate was 4 – 9 litres/minute.  This was down both to how comfortable the user felt and also, because some of the showers were connected to a combi boiler, there was a minimum flow rate required for the boiler to fire. Interestingly, their research shows that the minimum comfortable flow rate for females is 4 litres/minute, while for males it is 6 litres/minute.

And secondly, looked at individually, the picture is different. The duration under the usual flow rates was four to fifteen minutes.  Under the lower flow rates the range was five to thirteen minutes. Ten of the sixteen (63%) students increased their time in the shower under the lower flow rate. But this means that 37% of them actually lowered their time in the shower. Maybe because the comfort conditions weren’t as conducive to hanging about in the shower as before, but participants weren’t asked this question.

The researcher’s conclusion was as follows: The most important result of the study is that, below a certain value, the duration of a shower increases upon reducing the flow rate, which means that the decrease in the volume of water used does not follow the reduction in the flow rate, such that the savings may not be as significant as expected. This leads to the conclusion that, for each type of shower, there probably exists a “break point”, i.e. a point at which a flow rate is not translated into an increase in water efficiency.

But I think they have missed a trick here…Surely the 24 million dollar question that needs answering is: does this increased time in the shower lead to a greater amount of total water used? This research has proved that the answer is a resounding no it doesn’t. It actually leads to a sharp decrease in the volume of water used. The research showed that more than half of participants increased the duration of their shower at the lowest flow rate. But 87.5% reduced the total volume of water they used. For females the average shower volume of water fell from 80 litres a shower to 50 litres a shower (a decrease of 37.5%) while for males it was less (but still a reduction of 20% from 57 litres/shower to 46 litres/shower). 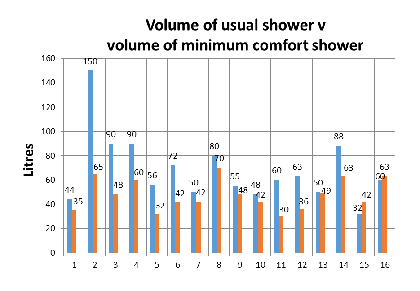 Of course my punters at the beginning will now stand behind the defence of ‘Well that’s Portugal, not the UK’. So fine. Let’s repeat the same research here in the UK and live or die by the results…