Back splashing around with adolescents this month in their showers as promised. Plus a bit of info about behaviour change science and methodologies. (A year of showering variously – always keen to expand its reader’s knowledge…). Behaviour change science is (as you would expect) the study of what is the best way to influence behaviour. Social norm theory and nudge theory are two methodologies and the behaviour we want to influence is for adolescents to meet the UK Government’s four minute shower target.

Social norm theory uses the effect of peer pressure to influence desired behaviour. It needs over 50% of the group to carry out the behaviour, and ideally two thirds or more. Apparently the behaviour doesn’t have to be real as long as it is perceived to be real. So a statement like ‘65% of adolescents shower for five minutes or less’ is considered to be an effective social norm message. Only for me there is a bit of a problem here since we usual work on a zero sum ‘five minutes or less’ scenario. And having seen the sheer astonishment etched across the faces of adolescents when even one person in a class of 30 puts their hand up to indicate that they spend five minutes in the shower, I am pretty confident that a social norm message such as ‘65% of adolescents spend five minutes or less in the shower’ will be met with a massive ‘OMG… LOSERS!’ So, as social norms don’t work with adolescents and showering we have to try something else. 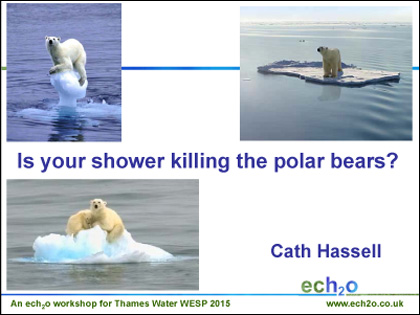 Nudge theory is a concept in behavioural science, (and political theory and economics) which argues that positive reinforcement and indirect suggestions can influence the motives, incentives and decision making of groups and individuals, at least as effectively, if not more so, than direct instruction, legislation, or enforcement. Shower timers are supposed to be a good example of nudge theory.  But all this ‘not telling’ malarkey doesn’t sit that well in the ech2o office and our plans for world domination so we use Gudge theory – nudge theory with a dollop of added guilt. As demonstrated in the slide below and explained more fully in March’s showering blog. The extra added advantage of gudge theory is that in our family gudge is a dish of butter, sugar, milk, cocoa, broken biscuits, sultanas (as part of our five a day) with melted chocolate as the topping, the precise recipe of which has been passed down through generations and so it is something to be welcomed with open arms.

So how successful is our gudge thoery? We asked 120 sixteen year olds a series of shower questions and analysed the reponses. 66% of them showered every day with a further 16% showering more than once a day, (most of the latter group showering twice every day.) Just six pupils spent five minutes or less in the shower, 58% spent over ten minutes in the shower, and the average shower time was 17 minutes (over twice the UK average and more than four times above the target four minutes). 61% of this adolescent focus group categorically stated they would not be able to meet the four minute shower challenge. Then we gudged them with the plight of the polar bears and put them into mixed groups of long and short (relative adolescent type short) showerers and asked them what would incentivise or influence them to get out of the shower quicker.

The answers were many and varied, but we are pleased to announce that environmental reasons (i.e. our gudge theory) came equal top along with rewards (both coming in at 17%) with 16% voting for technology thatforced people out of the shower after four minutes. Rewards could be from water companies or parents, as long as there was a reward. The technological solutions were mostly a shower that cut off or ran cold after four minutes.  And none of that pressing a button to make it restart – once it was off you are talking 30 minutes at least before it starts again. One group came up with the idea of wee from the shower if you exceeded your allotted time but (aw bless em!) not for ‘old’ people (I didn’t get them to classify old in case it included me) in case they couldn’t shower quickly enough. More random ideas included: something in the shower that meant your wrinkly skin never unwrinkled; several pupils reckoned that if they woke up late they showered really fast so something that caused the space time continuum to crash and burn between their alarm going off and having to be at school would be a helpful spur; and one group of girls said that if their periods happened every day because of spending so much time in the shower that was the one thing that would definitely get them to stop!

The four minute shower timer didn’t come anywhere. But it was a free bit of kit so they all took one anyway…

May 2015 – Adventures in the world of adolescents part 2