Another blog title that could be read in multiple ways. If it wasn’t already almost December I would wax lyrical about sharp-suited lawyers, bewigged judges and paying off the jury. But it is so tough…

I have been meaning to blog about shower heads for a long time now, and am somewhat bemused as to why it has taken me so long. After all its not that I have to drag willing guinea pigs off the street to try them out. I can only imagine it was because I had it on a list, and once things get on a list in ‘Cath World’ it’s almost as though they’re done and dusted.

I started writing this blog in a haze of steam emanating from our bathroom and winding its way across to the front bedroom and our computer. I had run five 30 second showers but, by the time I had put the shower on, got downstairs, crouched by our water meter, turned on the torch, put my reading glasses on, got the water meter and second hand on my watch to sort of line up, waited for 30 seconds to measure the volume of water used, and then reversed the process before I was back upstairs to turn the water off ready to switch the shower head over and start again, I reckon it was two minutes per shower. In effect a ten minute shower at an average flow rate of 9 litres/minute.

For purposes of scientific rigour, I carried out the experiment at 9.15pm on a Sunday night (a slow water use time in our street) so as to lessen the possibility of a high demand on the mains leading to a reduced flow at the shower head (something that quite often happens during my usual morning shower). The first four tests were carried out a full bore flow rate so that I was sure it was the same for each showerhead. I felt like Dan after the experiment and I wish I had his humidity tester as well. I had to open the window to get rid of all that steam, though it was so wet outside I probably just swapped cold damp air for hot damp air.

Anyway, the results, after I multiplied up the 30 second readings to give a corresponding litres/minute figure, were as shown in the table below.

Interestingly when ten years ago I installed a thermostatic mixing shower at our house (upgrading from the shower and bath taps combo) the Grohe was one of the very few flow regulated shower heads available on the UK market. Now, it has an air of ‘not quite the new kid on the block’ about it, with its clunky looks whereas the AquaAir and Methven have much sleeker lines. But all the shower heads mentioned above, however they are marketed (e.g. ‘luxury’) are plastic and not brass. Which at approx £20 -25 a pop is rather a lot to my mind. 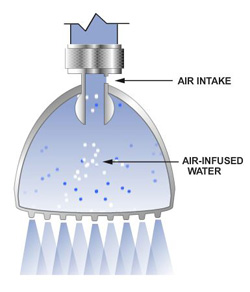 All ‘eco’ showerheads reduce the amount of water that exits the shower head usually using a flow regulator (which regulates the flow regardless of any changes in pressure) coupled with some sort of technology to trick the user into feeling there is more water coming out than there actually is. It’s definitely a big thing now. Companies are falling over themselves to come up with their own USP.

The AquaAir uses aerated technology. Aerated shower heads mix air with the water which creates the impression of more water (this is really clearly seen in aerated flow from taps – think champagne taps), and also has the effect, or so it seems to me, of making the water feel softer. The AquaAir doesn’t have a diagram to clearly show this but the Bricor shower head (as shown) has a good explanation and a cool moving graphic. (Go here to see it in action).

The Methven uses twin jets of water designed so that the drops of water collide as they leave the shower head (see below but ignore the reference to 22 litres of water before the shower head is installed!) that cause an increase in the number of water droplets (‘to thousands’ according to their blurb).

Some, such as Low E’s ‘Oxygenics’ shower head are based on the venturi principle (which, in fluid dynamics is the fact that a fluid’s velocity must increase as it passes through a constriction in accord with the principle of continuity) to increase the speed of the water as it exits the shower head but with extra added sales bumf. I also quite like the look of the Pulse Eco Shower, which like most pulsed showers relies on the pressure of the water jet to turn a miniature water turbine attached to a rotating wheel inside the shower head. The wheel has one or more holes in it so it interrupts the water flow intermittently, giving regular blasts of pressurised water through the shower head nozzles instead of a constant stream.

However, I have not tried either of the two above and although a friend of mine just loves her AquaAir shower, Suhith and I rather like the Methven ‘colliding water droplets’ feel and it is currently our showerhead of choice.