We went to Bath. I met a spy. I took this photo of an ancient Greek message. I think we were told it says, ‘Have a short shower’, but my memory may have failed me. 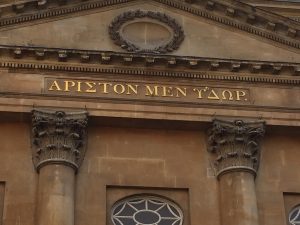 I also tasted the water from the pump room. Warm. Full of minerals. Tasted disgusting! Bathing in it, mind you, was something else, especially at night with the rain coming down…

Shower option 2 at the Homestead

Yes… Mu and Eric did have another shower option at the Homestead. Shower No.2 was put in downstairs for Andy (cousin) when he ended up in a wheelchair after a wipe out on his bike. Plumbed in by Ced (his dad, my uncle) who was a real DIY type of bloke. It shared a space with the downstairs loo (though there was a partial dividing wall between the two.) and had two entrances. Nominally, one for the shower and one for the loo.

Eric, by contrast wasn’t a DIY type of bloke. One day Maggie (Mu’s mum) wanted one of her stools shortened by an inch. Ced wasn’t around so this was Eric’s chance to impress his mother-in-law. Eric wasn’t stupid. He realised his limitations on the DIY front and wasn’t going to mess this one up. I was about ten at the time and was watching closely to pick up any tips that would prove useful for me in my future life. And very impressed I was too with how methodically Eric approached the task. He measured off one inch from the bottom of the leg, marked it all round with a pencil. Sawed it off. Then onto the next leg to repeat the procedure. He did this four times. Job done, Eric turned the stool over and placed it on the ground with a manly flourish. At which point it fell over. Somehow, he had cut one inch off two legs (so far so good) but zero inches of another leg and two inches off the fourth leg.

By contrast Ced built a massive extension on his house. Which is why he did the plumbing for the downstairs shower and not Eric.  Once it existed pretty much every visitor to Mu and Eric’s used that shower. But not me. Though I did enjoy the excitement of using the double-doored loo, usually remembering I hadn’t locked the second door only after it was too late.

Jim (Mu’s younger sister) has her own memories of the downstairs shower: More efficient.  And definitely warmer!!’  Though with the one slight downside in that you had to put up the frequent visits from Eric with his cries of “Need a pee and can’t wait.”

This one is with Ben my next door neighbour who took up the offer of a new shower head with alacrity, mainly because the pressure in their flat is so low. Ben hasn’t yet fronted up with the promised blog and I fear it may fail to materialise given his fledging vegan takeaway meals business. He tells me both he and Roz (his partner) like the Satinjet immensely and definitely feel as though they are having a better shower than before. I reckon it’s the colliding droplets of water. Makes you feel more enveloped however low the flow rate. Of which you can read more about in my December blog along with our discovery of ambergris on a Welsh beach.

The fabulous Tūroa VJet from Methven is the shower head of choice at 5 Roseberry Gardens, having received a big thumbs up from all three of us.  Tūroa means ‘enduring or long-lasting’ in the Maori language, which is apt given that the VJet is manufactured from stainless steel and not the ubiquitous plastic that so many other shower heads are made from.[1] Stainless steel is part of the circular economy (posh term for ‘can be recycled’) and is more durable than chrome. It is corrosion-resistant, scratch-resistant, and tarnish resistant and I prefer its slightly less shiny appearance compared to chrome. 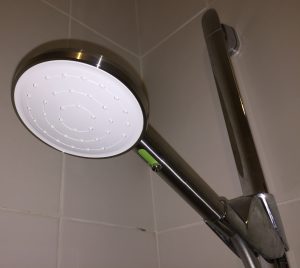 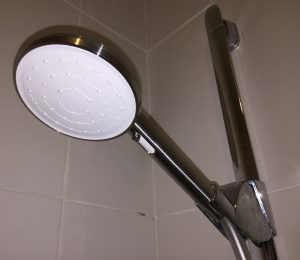 Everything about this shower head screams class. Though it is so classy that it whispers it rather than screams it. From when you first pick it up and feel the unexpected heaviness and realise that’s it’s not chrome covered plastic, through to the precisely engineered sliding control (with its green or white indication) which changes the flow pattern from ‘relaxing’ to ‘invigorating’[2] and the white ABS plastic insert at the shower head.[3]   The green position has a more diffuse spray pattern. At the white end it’s more direct and concentrated. Suhith prefers a more relaxing, mistier and lower flow rate shower (about two-thirds green) whereas Sam and I have opted for the faster more direct flow (all white).

Because the Tūroa VJet is stainless steel, a PVD (Plasma Vapour Disposition) can be added to the surface in a myriad of colour finishes.[4] I’m not convinced anyone needs a shower head that incorporates PVD technology into its design. But it sounds impressive. And is, apparently, less environmentally harmful than a chrome finish.

In our primary school water workshops we tell the kids four minutes was chosen as the challenge because scientists had worked out everyone can get clean in that time even if you’re covered in mud or jam. But the other day I was in the shower after having been a plasterer’s mate for the day.   Matt (brother) and I had taken down what was left of the landing ceiling after some of it had collapsed a few weeks earlier, thus acquainting ourselves with over 100 years of accumulated loft debris including the deadly slate dust. The old ceiling was down, the house was covered in a film of thick black dust as was I. No problem I thought. Four minutes, bish bosh. I was wrong.

[1] In my opinion metal is better than plastic in most situations.  This is an amusing video showing how difficult it is to damage metal shower fittings.

[3] ABS is, environmentally, one of the least troublesome plastics – if any plastic can be called untroublesome. It is also the plastic that Lego bricks are made from!

[4] PVD is a super-hard coating that is by far the most durable coating available today. This is how it is applied: The material to be deposited is heated to a high vapour pressure by electron bombardment in a “high” vacuum and is transported by diffusion to be deposited by condensation on the (cooler) workpiece. (No, I don’t get it either. Ed)