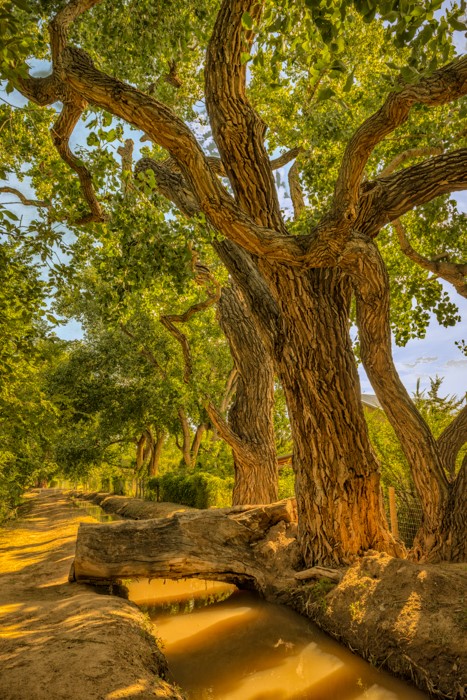 If you asked me would I have liked to read a book about a year in the life of a ditch I would probably have demurred. If you had told me it was an irrigation ditch in northern New Mexico in the US and documents a way of life little changed over several hundred years, I would probably still have demurred. After all, we are talking about a ditch here aren’t we?

But given it was a gift and inscribed with a message that it might even have been the second time i was sent this book , it seemed churlish to not even attempt to start the story.

And how glad am I that I did! The book meanders slowly through the seasons much as the ditch (or acequia to give it its Hispanic name) does through the landscape even when it’s fully open. It’s not a long acequia (less than five miles long from memory) and is one of seven in a small stretch of valley, with its position as the last one that takes its water from the river, leading to delicate negotiations with the mayordomos of the upstream acequias in times of drought (which is most summers).

There are approximately 1,000 acequias in New Mexico. (Or there were in 1986 when this book was written) many of them as small as this one and yet all playing a really important role in irrigating fields.

The term mayordomo is the person who is in charge of the acequia, a position that pays very little, yet confers great power. It is always held by one of the parciantes (owners of land fed by the acequia in question), and they are responsible for the day to day decisions required to keep the ditch working and for limiting water use by in times of drought to ensure all parciantes get their fair share.

As well as understanding the rhythms of the season throughout the year we are introduced to the other families who share the waters from this acequia and the animals (most notably the beavers and muskrats) that live along it.

I especially like the way that it takes enough time for the ditch to fill at the beginning of the season that the author can almost have time for a cup of tea before the water reaches its pinch point of a running trap under the road, where it often blocks – the leisurely movement of the water along its route reflected in the text.

A fabulous book. Thanks Warren!

And also thanks to John Simmons who took the wonderful photo  of cottonwood trees by the side of an acequia, a visual rendition of a scene repeated time and again in the book. http://johnsimmonsphoto.com

A review of ‘Mayordomo’ by Stanley Crawford