Methven – a New Zealand company, founded in 1886 as a manufacturer of high quality brassware and now well known for their innovative shower heads – recently gave us three of them to trial. I am not 100% sure if they are clear on how this shower blog works but guess they will be soon! I had asked to trial the Aurajet having seen it at a Waterwise conference. Simon, one of the Methven reps, duly turned up to the ech2o office with not just the Aurajet but also their Satinjet head and their amazing stainless steel adjustable Vjet Turoa (engineered to perfection and more of which in a future blog)

A week later we were off to visit Rossi, Karen and Oli on the Gower. They have had a shower head from ech2o before (back in June 2017), blogged about here: disco shower . So it was probably time for an upgrade. On arriving we found out that it was Rossi’s birthday. Aaaaaggghhhh! Luckily, a bit of ribbon around the shaft of the Aurajet and it looked like we had known all along. 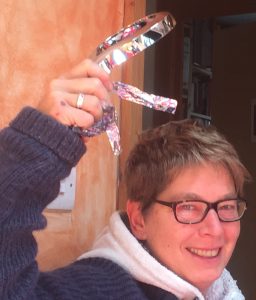 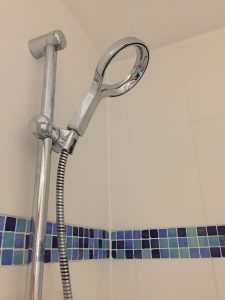 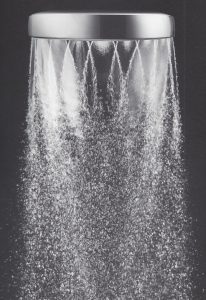 First impressions were that Rossi really liked the design of the Aurajet compared to their existing showerhead and so chose that one over the Satinjet.  And it looked great once in the shower. But would they find that they were having a shower with a hole in the middle? Rossi and Karen’s shower is heated by solar panels (or LPG when there is no sun) and the pressure is rubbish (0.3 bar or 3m above the shower head in old money) The heating by the sun wouldn’t be an issue but maybe the pressure would be since 99% of showers in NZ are fed directly from the mains supply at a pressure of 2 bar and above. Karen opted to check it out first.

Would the ‘invisible nozzles that generate individual jest of water that collide against precisely angled surfaces hidden within the contours of the unique halo shaped showerhead’, cut the mustard with her?[1] Would she be impressed by the ‘stunning fan of luxuriously dense droplets that delivers a shower with 20% more spray force and twice the amount of water contact on her skin’? What about the ‘enveloping warmth that has to be felt to be believed and the heavenly experience that puts you in a great space every time you shower…?’ Karen is a bit of a fan of PR gush so I wasn’t too worried on that front but on a more prosaic note would she like it more than their current head? And, more importantly, would it work for Rossi’s cold shower treatment? Because if it didn’t, however amazing it looked and however much Karen and Oli liked the colliding water drops, it wouldn’t stay. Rossi has the final say on showers in their household. Just like Suhith in ours. 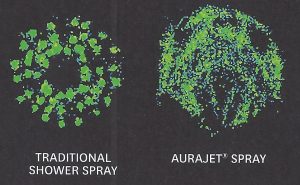 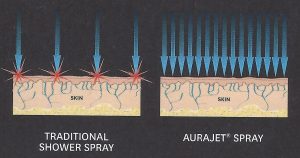 It scored top marks by both, so it was definitely staying and, shower head sorted, off we went to do a bit of a beach clean

Sam (16) amused herself by taking selfies of herself (Is that an oxymoron? Ed) and Karen. Whilst I do have several examples of afore mentioned selfies an official complaint by the teen has resulted in me posting this one of her instead. (Nothing to do with the Gower at all! Sam and Kofi, my mate Joyce’s graddson.) Oli (also 16) spent an inordinate amount of time explaining how tired he was. And we, the adults, beetled around in a spiralling pit of despair as we cleared up ever tinier bits of plastic. We were just about to go home when Oli made an exciting discovery – a chunk of ambergris. Or whale vomit, worth shedloads of cash as he authoritatively told us. We tried to Google a bit more info but there was no internet access on the beach so we were reduced to random musings…. Was it really whale vomit? How many shedloads of cash (Rossi has a lot of sheds)? Is it really used as a perfume because it smells so nice? And, should we take it? Karen and Rossi weren’t big fans of that idea, and Sam once she had heard it was whale vomit didn’t want to go anyway near it! So it was down to Oli and me. Of course we took it! 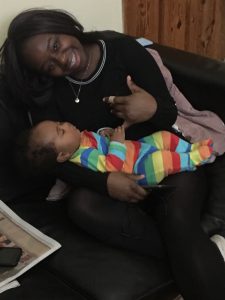 Back at the house we Googled ambergris[2] and discovered it is produced by the sperm whale, is whale poo rather than whale vomit, that a sperm whale eats one tonne of squid a day, that usually the whale vomits out the squid beaks but in rare cases (1-5% of sperm whales ) that doesn’t happen and the squid beaks pass into the whale’s intestines, where it mixes with faeces and after several years blocks the intestines which eventually rupture and kill the whale, that it is highly prized in the perfume industry, due to its ability to ‘fix’ a scent on human skin, that it is worth $20,000 (£15,000) per kg!, that it is usually an egg-shaped or round lump, that its colour varies from black, to shades of brown, gold-brown and tends to lighten over time, that it has a pleasant musky fragrance, that touching the waxy lump with a hot needle will melt it, release white smoke and give off an interesting smell. (Though candle or paraffin wax, residues from palm oil distillation, rubber, or solidified sewer grease would also meet this test). So some chemistry experiments were definitely in order. But it was a bit cold and rainy to go out and Karen categorically refused for us to do any incendiary experiments indoors. She also banned Oli from taking it to school. Honestly, some parents are just soooooooooo sensible!

The next morning Sam and I were hanging around their house pretending it was ours and I suddenly remembered I didn’t want to be all mouth and no trousers on the ambergris front and needed a picture as, annoyingly, not one of us photographed it on the beach, even though it was going to make us gazillions. So, here it is. Looking good re the colour and weighing a handy 3kgs or so. Just one slight problem. As I took it out of the bag for its photo opportunity I was hit with an overpowering smell of diesel! No pleasant musky aroma, not even a sniff of squid or seaweed. It was really unpleasant, like sticking your head into a diesel tank. So ambergris it was most definitely not. Though, as Sam wouldn’t smell it, to corroborate my experience, maybe I was mistaken and it was still our ticket to Tignes. 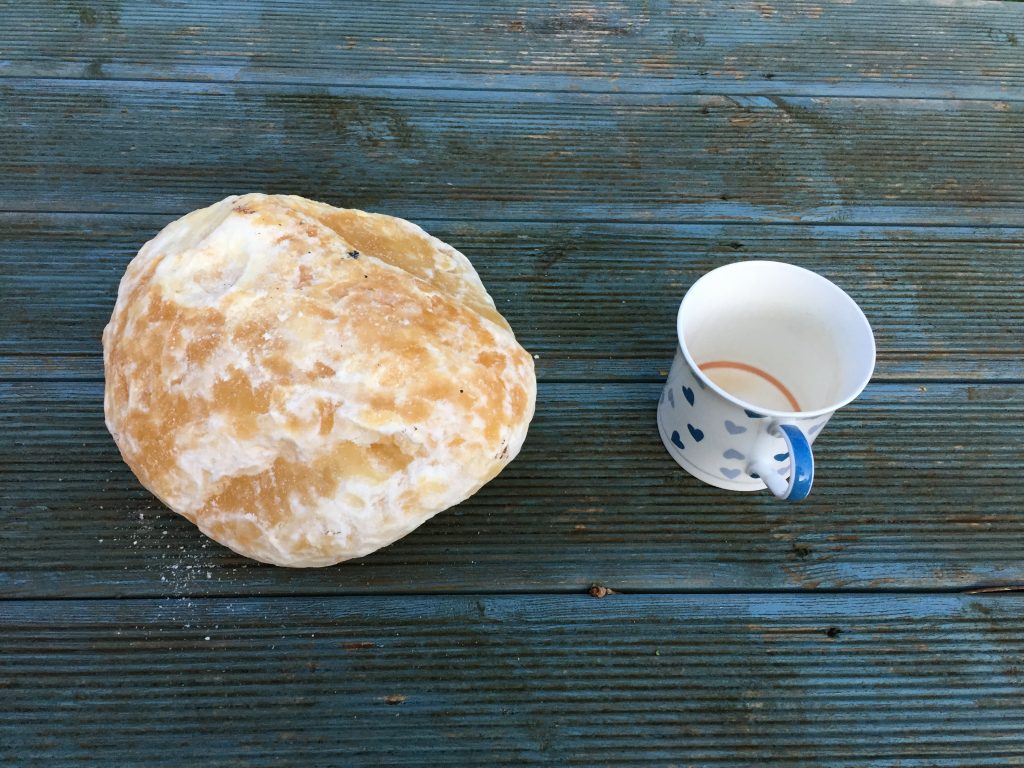 So back to London to check out what else it could possibly be – a chunk of diesel that had escaped from a container ship and then somehow turned into a hard lump seemingly the answer. Burt seriously… could it be that?

I found a lot of info about oil spills at sea, (as you would expect, this is the internet we are talking about after all),[3] But none of it seemed to be about forming lumps like we found on the beach. I learned that when different kinds of oil enter the sea, many physical, chemical and biological degradation processes start acting on them. All of the following have an effect: the composition and amount of oil discharged the quantity and duration of the discharge/spill, the time of year at which it occurs. The temperature of the air and the receiving water body, the weather conditions, the amount of oil-degrading micro-organisms in the area, the supply of oxygen in the water. Terms such as weathering, evaporation, dispersion, biodegradation, oxidation, emulsification all feature heavily. But nothing about lump forming. And then, having trawled through the whole thing I came to ‘oxidation’ and hit pay dirt.

Oxidation is when oils react chemically with oxygen either breaking down into soluble products or forming persistent compounds called tars. The formation of tars is caused by the oxidation of thick layers of high viscosity oils or emulsions. This process forms an outer protective coating of heavy compounds that results in the increased persistence of the oil as a whole. Oil aggregates look like light grey, brown, dark brown, or black sticky lumps. They have an even shape, vary from 1 mm to up to 50 cm and can exist up to several years in the open ocean.

And then I saw this about palm oil bergs, which are congealed lumps of palm oil that wash in from the sea. Their appearance is usually white or yellowish, they have a waxy texture and emit a putrid diesel scent (my emphasis). Also, palm oil can be legally released at sea as long as ships are 12 nautical miles from the shore line, have a depth or 25 metres under the keel and have a speed of seven knots while discharging.

So there you have it. Case closed. I’m convinced, though disappointed obviously, that it wasn’t ambergris. As Frankie the flamingo would say I have solved the mysterious case of whale sick on the beach, though Oli, Sam, Rossi and Karen all helped. “And me,” squeaked Denzil the dragonfly as he performed a few acrobatic twirls before blatantly plugging Frankie’s next adventure.

[1] Nice video here showing how the jets collide as the shower is turned on more fully. And how it directs the flow inwards so you don’t feel like you are showering with a hole in the middle.

December 2019 – a get rich quick opportunity