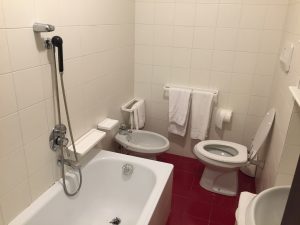 No I haven’t been showering under a snow cannon – too cold. But I have been skiing recently, in the Italian Alps. There wasn’t anything of note to write about the showers apart from the fact that, weirdly, the hotel had a shower but no shower curtain! Meaning that I had to use the shower like a slightly posher version of a bucket bath.

Four minutes in a shower gives you plenty of time to think – as does a long trip in a chairlift, checking out the views of the mountains before the end approaches and the stress of executing a competent dismount kicks in. And what I kept thinking about was how artificial snow is becoming more and more ubiquitous at ski resorts since I first went skiing (over 20 years ago).

The obvious reason is climate change leading to less snow cover.[1] But skiing is also big business so if the snow season can be extended this has an economic advantage.  Many ski resorts use artificial snow for precisely this reason, as well as to augment natural snowfall, ensure good snow conditions on all pistes and to keep the lower slopes open so that skiers can ski off the mountain at the end of the day even if no real snow is left. Then there are high status events where snow cover is essential. For example, artificial snow was used extensively at the 2014 Winter Olympics in Sochi, and the 2018 Winter Olympics in Pyeongchang.

All snow is a type of ice crystal – but manufactured snow is formed quite differently from natural snow and has a very different structure. A snowflake begins to form when an extremely cold water droplet freezes onto a pollen or dust particle (a nucleator) in the sky, creating an ice crystal with a hexagonal structure. As the ice crystal falls to the ground, water vapour freezes onto the primary crystal enlarging the snowflake.[2]

This freezing process is very systematic and the hexagonal crystal structure of ice is repeated as the snowflake falls. Variations are produced by different temperature and humidity conditions through which the snowflake passes.[3] By contrast, artificial snow is made from water droplets rather than vapour and is basically a round ball shape. Artificial snow is much denser than natural snow and melts at a much slower rate.

The growth of artificial snow.

While first patented in the 1950s,[4] it wasn’t until the 1970s that snow making machines started seeing significant commercial use. Now it is estimated that more than 60 per cent of the world’s ski slopes are currently supplemented by artificial snow at some point during the skiing season.[5] It wasn’t until this century that snow cannon and snow lance use in the Alps began to increase substantially. Artificial snow production in Switzerland grew from less than 10% of the piste area in 2000, to 36% by 2010. In Austria, this reached 62% per cent in the same period. In 2019 15% of French ski areas were covered by snow making machines and they are no longer confined to low lying areas.[6]

Snow machines work by spraying microscopic ice balls and water droplets into the cold air, which combine, freeze and then descend as ‘snow’. The lower the air temperature is, the more and the better snow a cannon can make.[7]   If it’s not cold enough – ideally around 2.5 degrees Celsius – the machines simply cease to work properly. Therefore, if it is necessary to make snow at warmer temperatures, agents such as Snomax™ are added.

How a snow cannon works

A modern snow cannon usually consists of one or more rings of nozzles which inject water into a fanned air stream. A separate nozzle is fed with a mix of water and compressed air and produces the nucleation points for the snow crystals. The small droplets of water and the tiny ice crystals are then mixed and propelled out by a powerful fan, after which they further cool through evaporation in the surrounding air as they fall to the ground. 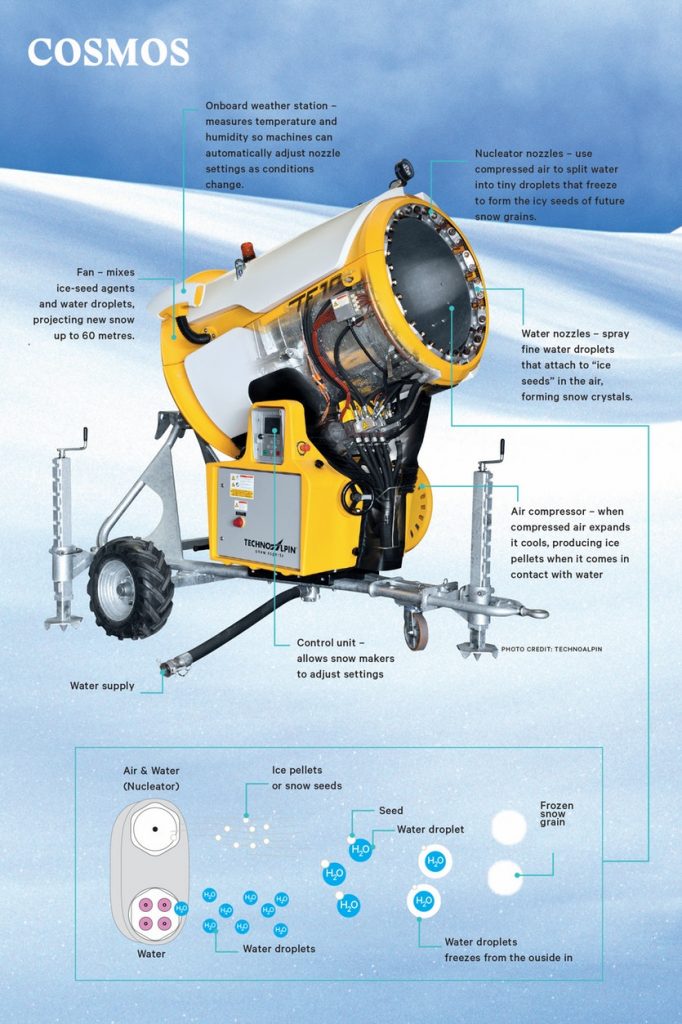 How a snow lance works 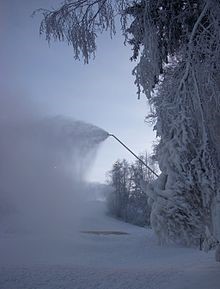 Snow lances are tall (up to 12 metres long) vertically inclined aluminium tubes at the head of which are placed water and/or air nucleators. Air is blown into the atomized water at the outlet from the water nozzle. The previously compressed air expands and cools, creating ice nuclei on which crystallization of the atomized water takes place. Snow lances use less energy than snow cannons (approx. half the energy consumption for the same amount of snow), are much quieter and are simpler to maintain due to fewer moving parts. But they have a smaller range, lower snow quality and a greater sensitivity to wind.

A snow lance in action at Flottsbro, Sweden.

Skiing resorts are energy-intensive operations with electricity required to run the ski lifts and diesel for the piste bashers. Then there are the specific environmental issues of producing artificial snow.

Water and energy use: It takes approximately 480 litres of water to produce one cubic metre of snow, which a single snow cannon can take as little as one minute to produce. The energy required to make artificial snow is about 0.6 – 0.7 kWh/m³ for lances and 1 – 2 kWh/m³ for snow cannons .[8]

Mountain reservoirs: The high demand for water usually requires new mountain reservoirs to reduce the stress on natural lakes or rivers. In addition to the hazards posed by conventional reservoirs and dams, mountain reservoirs are subject to a variety of mountain-specific hazards such as avalanches, rapid flows, and landslides. Plus, there is a large amount of infrastructure required to run the supply water to the cannons.

Flora and fauna: Artificial snow takes around two to three weeks longer to melt than natural snow causing new threats and challenges to local flora and fauna. Furthermore, the high mineral and nutrient content of the water used to produce artificial snow changes soil composition, which in turn affects which plants are able to grow.

Contamination of water supplies: Chemicals used in the production of snow potentially find their way into rivers that supply drinking water for the resort when the snow melts in the spring.

Skiing in Pila starts at 1,800m and goes up to 2,750 m. The resort has very few snow cannons even on the lower slopes (though it does have a telescopic one at 2,258m which can be rotated to provide snow on two different slopes). But it has a lot of snow lances which line many of the popular and lower level slopes (lower level being about 2,200 m and below in this case, though there are occasional higher ones – as high as 2,356m).  The mountain reservoir for snow making is at approximately 2,200 m meaning that most of the snow lances and cannons are fed by gravity. 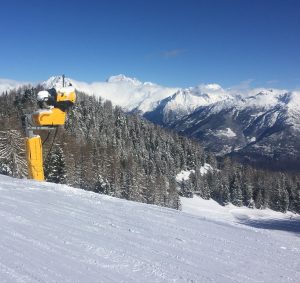 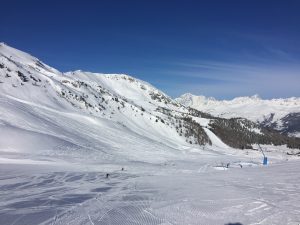 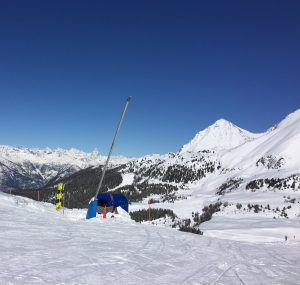 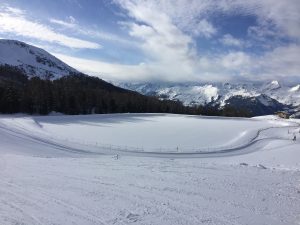 [1] According to the European Environment Agency, the length of snow seasons in the northern hemisphere has decreased by five days each decade since the 1970s.

[4] In 1958, Alden Hanson designed a snowmaking machine using a fan, particulate water and the optional use of a nucleating agent such as particles of dirt. He was granted a patent for his machine in 1961 and it is considered the pioneering model for all snow cannons today.

[6] Tignes has equipped the bottom of the runs on the Grande Motte glacier with snow making equipment at 3000 metres and Val d’Isere have done the same on the Glacier du Pisaillas to preserve summer skiing.

[7] This is one of the main reasons snow cannons are usually operated in the night. They are also noisy – a single snow canon emits between 60 to 80 decibels, the equivalent of heavy traffic – another reason for operating at night.

[8] In some resorts, such as Alp d’Huez, snow making now consumes more power over an average season than the entire lift system.