Despite being in lockdown have found a shower I didn’t know about! It’s called the Kelda shower and has a flow rate of just 4 litres/minute. There are a pile of them installed in the London Aquatics Centre in the Olympic Park. That’s the good news. The bad news is that, of course, I can’t just nip over and try one out while Covid 19 is still such an issue. Still ‘n’ all, having a swim there has been on my bucket list since it was opened to the public so maybe I will manage it now that I have a secondary interest in a visit.

I am used to having a two minute on-off-on shower flow regulated at 7.8 litres/minute. And regular readers of the blog will know about the at its best 2.2 litres/minutes flow rate I used to endure in Mu and Eric’s shower. So I could I cope with a flow rate of 4 litres/minute and still enjoy the shower? And are such flow rates likely to become the norm in the future?

My answer to the second question is ‘Well, yes, quite possibly’. The RIBA’s 2030 Climate Challenge sets a series of targets for architectural practices to adopt in their designs for new and retrofitted buildings to reduce operational energy, embodied carbon and potable water. One of the key design principles for sustainable water is to reduce UK water use in dwellings by 40%, i.e. down to a level of 75 litres/person/day.

For showers to meet Part G of the Building Regulations a maximum flow rate of 10 litres/minute is allowable or 8 litres/minute when required by planning, which is across all water stressed areas.  A 40% reduction from 8 litres/minute means a 4.8 litres/minute flow rate. I (and a lot of readers of this blog no doubt) would balk at this rate, possibly thinking of the first generation of electric showers back in the 1970s, even if they had never had to undergo a Mu and Eric shower special.

But satisfaction from showering is not merely about how much water. It’s also about the pressure of the water from the showerhead – the effective spray force. And this is where the Kelda shower is so unique. It combines air and water but in a totally new way. Standard aerated showers suck air into the shower head so that bigger drops of water are produced and the overall sensation is of using more water with a ‘soft’ feel to the shower. In contrast, the effect of Kelda’s technology is to increase the speed of the water as it exits the showerhead and therefore the force of the spray. The result is ‘an invigorating shower experience’ but with low water consumption. 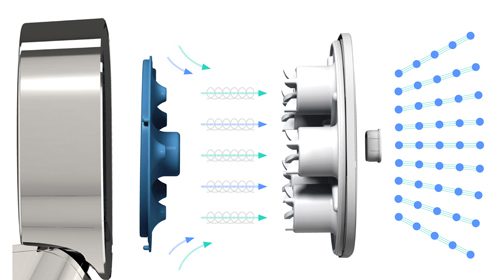 How does it do this? Well it uses ‘cutting edge technology used in the aerospace industry’.  Doesn’t this always sound so exciting? ‘Used in the aerospace industry’ – how futuristic and other worldly is that? It’s also a claim the Nebia shower makes.  And I’m a sucker for anything space related (as my showering in space blog demonstrates). When in fact such technology could be from the 1960’s so not so modern after all! Basically the astronauts went to the moon in not much more than a large baked bean can with a pile of heat protection layering for the return to earth. 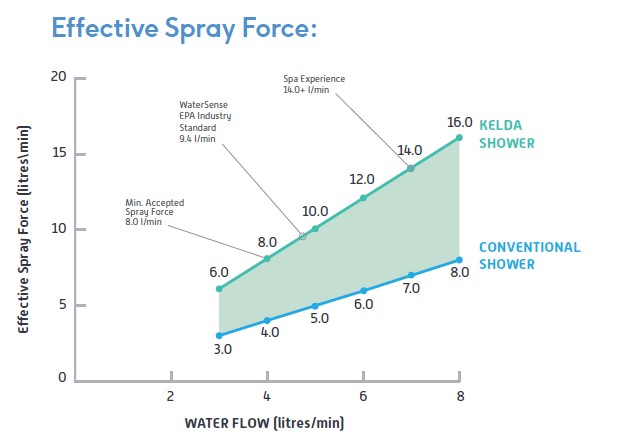 So ignoring that claim how does it work again? Well, a fan, housed in the control unit of the shower, produces an air stream that is fed to the shower head via an air hose. Thermostatically mixed water is fed independently to the shower head. Once there, water is injected into the air stream, broken into droplets by the air and accelerated through the jet-type nozzles. This increased force of the water means that even with the low flow rates achieved there is improved rinsability – think pressure washers. The effect of forcing the water through the air stream increases the effective spray force by a factor of two, making a flow rate of four litres a minute under a Kelda shower replicate the spray force of 8 litres/minute from a conventional shower. Intriguing and ingenious all at once!

So could I cope with a flow spray of four litres/minute and still enjoy the shower? Well, when you put it like the above maybe I actually could! Proof will be in the pudding. Roll on end of lockdown.