Back in Wales at Easter under the disco shower. Since I have blogged about that already I’m now turning my attention to the shower cubicle, of which they have two. Why the shower cubicle you ask? Well I had wanted to wax lyrical about fun in the surf but sheeting rain and virtually sub-zero temperatures meant that not even Rossi and Ollie were up to braving the waves with me. So we did a load of walks, played a myriad of different games and discussed shower cubicles in minute detail…

Actually the last bit is not quite true. So I am now having to take a quick straw poll with some lucky people in the office instead. The question? Shower cubicle or shower over the bath – which would you prefer? Obviously no walk-in-shower as a choice since that would just win hands down. No I mean those 800 by 800 mm square, 1800mm high oblong box shower cubicles.

The results were surprising, or surprising to me anyway. I am not a fan of shower cubicles at all but I seem to be in the minority. Out of the six in my (admittedly small) sample, just one, Mariko, went for the shower over bath option. And that seemed to be because of the usefulness of being able to ‘put other things in the bath’ – though no further details of which particular things were forthcoming! The rest all preferred the cubicle, for varying reasons. Safety was a bit of a winner with Fabien, Lara and Yogini who had a bit of a convo about having to step over the side of the bath to get in and how the bottom of baths are always slippery. OK I get that for the over 80’s, but this lot are at least 30 years away from that age! David was very clear that he ‘likes a shower to be a shower and a bath to be a bath’ and Laura seems to think that a shower over the bath spoils her enjoyment of a bath! And then the architects started to bemoan the fact that in new homes there is not enough space for both separately.

No-one mentioned that shower cubicles are warmer to use, but that’s is definitely my perception of them. It’s far easier to turn the shower off inside a cubicle while you soap up because the cubicle warms up so quickly compared to a whole bathroom. Though on the flip side, I reckon you end up staying in the shower for longer because of the grim reality of leaving that warm steamy cubicle for the cold bathroom that awaits you. Even at Mu and Eric’s house with its trickle of a flow, and two minutes’ worth of shower, opening that cubicle door was not something to be undertaken lightly!

I quite like this blog by Sunfrost – though the American misspelling of mould in the picture really bugs me! It points out that the design features of a conventional shower minimise thermal comfort (the shower curtain causing a thermal chimney) while exacerbating moisture problems. They also posit that evaporative cooling of the water droplets, the cold thermal mass of the tiles and the exhaust fan all add up to the requirement for a hotter shower for the user to remain comfortable, therefore maximising energy use and water consumption. Their solution isn’t pleasing on the eye – it offends even my design sensibilities let alone all the architects I know – but at least it is functional. 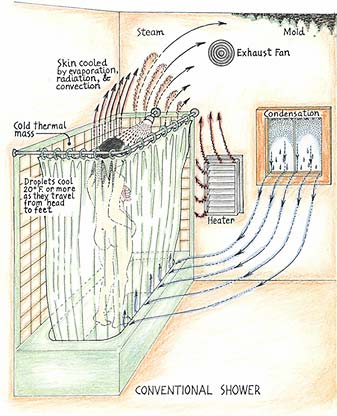 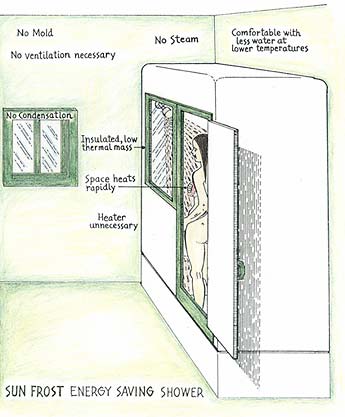 I also like the nerdiness of this anonymous source, who went to the extent of fitting a cardboard cover to the top of his shower cubicle to test the comfort levels in his shower. Look at the rapid fall-off in temperature when the lid is removed – from 30 to 21 degrees C in less than a minute – brrrrrr! 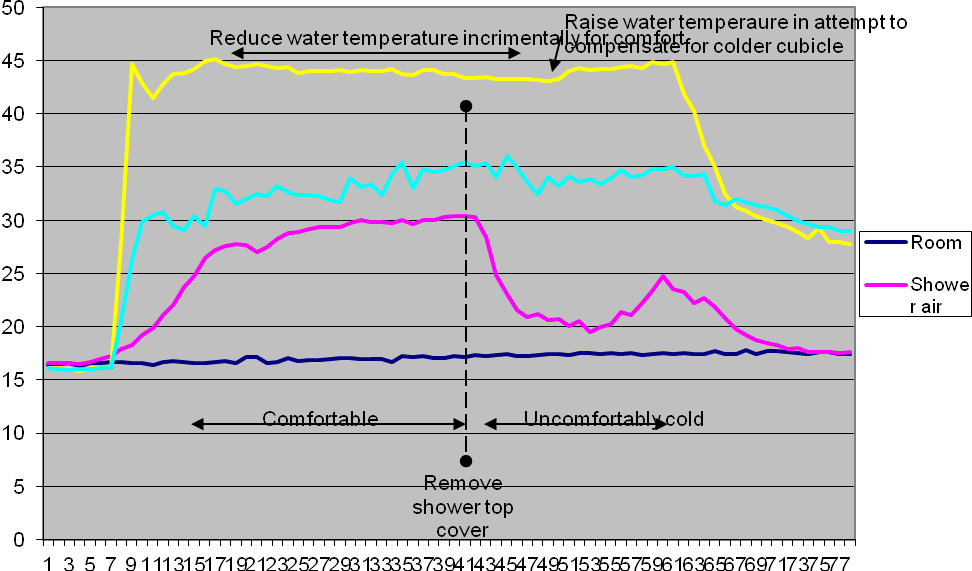 No-one in the survey mentioned the advantage that, if the shower cubicle is completely sealed right to the top it reduces condensation in the rest of the bathroom, especially if you wipe the sides of the shower cubicle down before you get out, but that must surely be worth considering!!

And then the other really weird thing was the lack of space issue that people seemed to think occurred in showers over baths but not in cubicles. So is that just me then? Do I really live in a world of my own as has sometimes been suggested?  But this morning, as I stood under the shower at one end of the bath, with the rest of it stretching away from me, and a view of most of the bathroom including the line of rubber ducks on the window and the orchid reflected in the mirror, I knew that my heart is still unchanged. A shower over bath wins out every time! 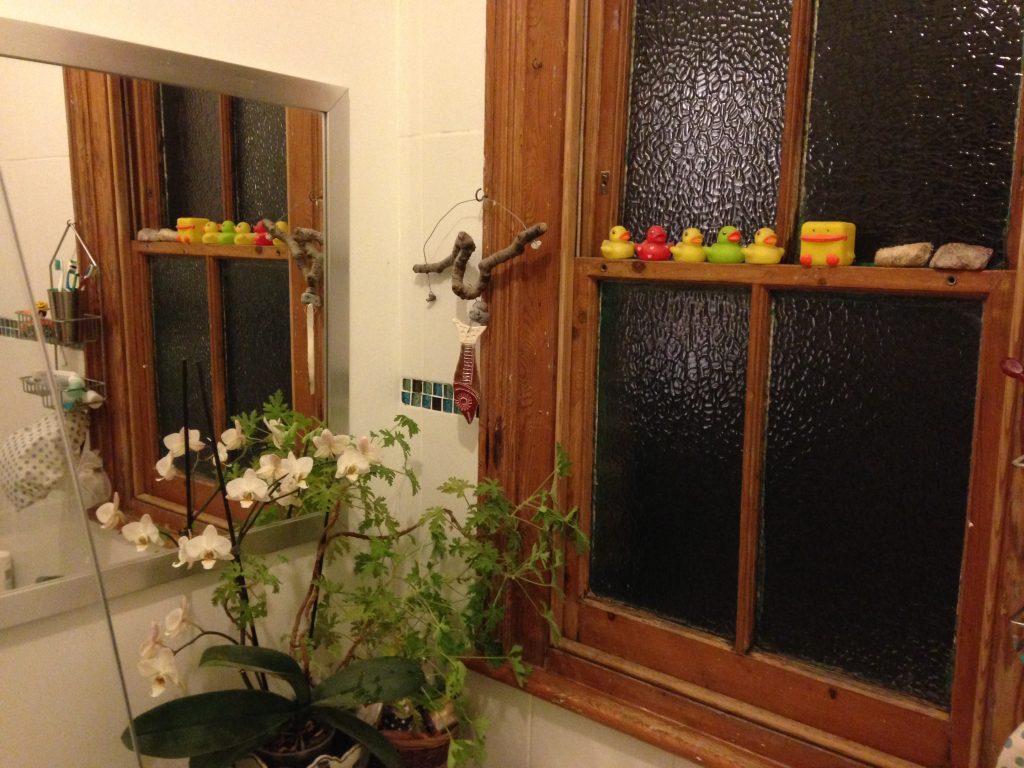