Anyone who lives in a hard water area in the UK (60% of homes) will be familiar with scale in kettles, on taps and shower screens, a lack of lather from soap, washing powder, etc, scum around baths and scratchy towels. While visible scale is unsightly and hard water is detergent hungry, the real issue is the deleterious effect that scale deposits have on heating systems by reducing the rate of heat transfer. This effect is not immediately apparent as it is happening within the pipes and appliances and most people install water softeners for cosmetic reasons.

Rainwater is naturally acidic because it contains dissolved carbon dioxide from the atmosphere and will dissolve compounds it comes into contact with.  Hard water is formed when rainwater percolates through deposits of limestone, chalk and dolomite. It is the dissolved magnesium ions and calcium ions that make the water hard, in contrast to soft water which has usually travelled through peat, igneous rock or sandstone sources.

Hard water can be temporary or permanent. Temporary hard water contains dissolved hydrogen carbonate ions, which (when heated) break down to form carbonate ions which react with the dissolved calcium and magnesium ions to form insoluble precipitates (calcium carbonate and magnesium carbonate), commonly known as scale. Permanent hard water contains dissolved sulphate ions which when heated remain dissolved, so not causing limescale. Whilst both have the same effect on detergents, it is temporary hardness that is more problematic in plumbing circuits, as the scale produced means that more energy is needed to heat the same amount of water. It is calculated that a 1mm layer of limescale on the heat exchanger in a boiler can reduce the efficiency of the heat transfer by 7.5%, and in extreme cases heat exchangers can become completely blocked by limescale and have to be replaced.

How to treat hard water

There are two ways to treat hard water. The water can be conditioned or it can be softened.  Water conditioners do not change the composition of the water so it still remains hard. Using different methods (electronic, magnetic, electrolytic and phosphate dosing) they reduce the rate at which the scale precipitates out. Water conditioners can work under certain circumstances but the process is not guaranteed to prevent scale, whereas water softeners actually soften the water, a process which is permanent. The downside is the large amounts of salt and water the softening process requires.

How a water softener works 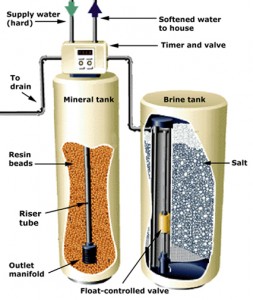 A standard domestic water softener works on the principle of ion exchange. It conditions, or softens, hard water by substituting sodium chloride (salt) for hard minerals such as calcium and magnesium. A typical water softener has a resin (or mineral) tank, a brine tank, and some type of control. The unconditioned water flows across a bed of resin beads which have a negative electrical charge that attracts the positively charged mineral ions of hard water while giving off sodium ions. Because of this attraction, minerals in the water, such as calcium and magnesium, adhere to the resin beads as the water passes through the tank. By the time the water reaches the bottom of the tank, it is softened. After a period of time, the resin beads become coated with minerals and must be recharged to become effective again.

During the recharge cycle water is passed across salt blocks to create a brine which is pumped across the resin beads.  As it flows through the resin beads, it exchanges sodium for the hard-water ions, regenerating the electrical attraction of the resin beads. Excess brine is then rinsed from the resin to drain.

It is important that recharging happens only when required as the procedure uses lots of salt and water. The rate of recharge depends on the amount of water used in the household and the hardness of the water (which, in turn, depends on geographical location). Water softeners that flush and recharge the system on a regular schedule are cheaper to buy but are a false economy. They are likely to recharge when not required (using unnecessary salt and water), or not recharge fast enough (thus supplying hard water even though a softener is fitted!). More efficient softeners measure the amount of water used against its hardness, to ensure recharging only happens when necessary.  Measurement can be by electronic controls (which requires an electrical connection) or via a mechanical water meter.

What about centralised softening?

Water softeners have been used domestically since the 1950s but more commonly from the 1980s, and historically were expensive to run, as well as wasting lots of water. It wasn’t until the BRE launched the Code for Sustainable Homes that there was even a stated good practice level of regeneration water that a water softener should use during backwashing. The BRE has set the figure at 4% of daily water use, which is 6 litres of water per person per day (assuming the UK average of 150 litres), though there are still far less efficient softeners available on the UK market. It’s important not to underestimate the running costs of the salt required for water softeners. A four-person household in a hard water area will require 192kg of salt per year costing £150 to 200.1 Then there is the cost of the machine up front (£700 upwards for the more efficient and sophisticated softeners). There has been little empirical research in the UK about whether the negative effects of the salt and water required to regenerate the resin beds is better or worse overall for the environment than the scale build up. Certainly the amount of salt water that runs to waste following the recharge process could be a problem if all households had one, and economies of scale mean that every household having their own water softener is not nearly as efficient as a centralised system.

The Netherlands has recognised the fact that controlling the process centrally is better for the environment and has been progressively softening their mains water since 1971 thus controlling the discharge of brine into the sewage system. In 1984 the Dutch Government set the minimum acceptable water hardness levels at 150ppm (compared to 320ppm upwards for hard water) which led to a sharp increase in the number of softening reactors in the country. Today, pellet softening is the main technique employed, although membranes and ion exchange are also used and by 2016 virtually all areas in the Netherlands will have met the standard2 Maybe it’s time that the UK followed suit.

Water softening – how best to do it?