There was never really any doubt about the subject of this blog for me. It always had to be about “the wettest drought on record”. It is usually easier to get people to sign up to sustainable water during a drought, (although, conversely, it makes it harder as soon as the drought is over.) But this “drought” has proved far harder because of the amount of rainfall. Plus the fact that the south west of England and the Midlands were classified as being in drought even as the unprecedented April rains were falling made it even more of a PR disaster.

So what exactly were the conditions that lead to the drought being announced? It was well documented that there had been below average winter rainfall over the last two winters leading to exceptionally low ground water levels. In addition, reservoir levels were low at a time when they needed to be full. In England and Wales it is the Environment Agency (EA) that decides when to call a drought, and it defines drought in two different ways. Environmental drought is when a shortage of rainfall has a detrimental impact on the environment and water company supply drought is when a shortage of rainfall causes concern for the ability of water companies to supply their customers. The EA makes a decision to move to drought status based on a series of factors including meteorological, hydrological, environmental, agricultural, and public supply.1 (I would also add political here but that is just my opinion.) The drought designated areas increased rapidly from the 12th March until, by the 16th April, over 75% of England was officially in drought; the subsequent sodden April and early May resulted in a lifting of formal drought status from many areas although the south east and east of England still officially remain in drought. 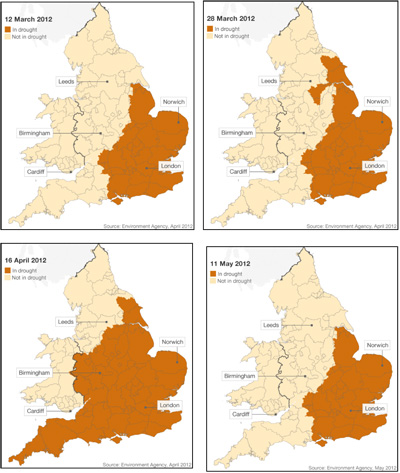 How can we prevent further droughts?

This question is often posed, but it is not the question that needs to be asked. As we cannot control how much rain falls, we should be asking:“How do we manage our water supplies so that prolonged periods of below average rainfall do not result in a problem?” Obviously there are many solutions, from collecting rainwater, recycling greywater, reducing leakage (both in the mains and in customer’s branch pipes), retrofitting water efficient appliances and just using less! As these messages were drowned out (excuse the pun) by the call to transfer water from wetter to drier areas let’s look at how possible that would be.

Areas of Scotland (e.g. the Highlands) do get a lot of water (up to 4000mm/year) but the east of Scotland gets no more than the east of England at 600mm/year. And, in 2010, when the east of Scotland experienced a drought, there was no transfer of water from the west to the east because (just as between Scotland and South East England) the infrastructure to provide large scale water transfer doesn’t exist, and the cost to build it is extremely high.2

For a pipeline to be built between Scotland or the north of England to the south east there needs to be a guaranteed profit to incentivise the billions of pounds worth of investment that is needed. A guaranteed profit requires a guaranteed demand. But since 2005 there have been just two hosepipe bans in the south east (and one in the north west!). if the pipeline had already been built, in six out of the last eight years there would have been no demand for this extra water. That is poor odds on which to invest so much money and it is unlikely the shareholders of a private water company would support such a decision. Nor, one would imagine, would the people of Scotland. Of course we can argue that climate change will lead to more likelihood of drought and maybe it will, but in fact, in the UK, wetter, rather than drier winters, are indicated on current climate change modelling. The solution is unworkable without major Government backing, and that will not happen however much local politicians in the south east want it to.

At the start of the hosepipe ban Thames Water flooded London with posters that read “There is a drought. Please save water” splashed across a picture of cracked earth, which in reality, if not on the posters, quickly turned into a sea of mud. Eventually the sodden April weather resulted in a change to the message which now reads “Yes we know it’s been raining a lot recently but there are still water shortages.” This is a far more useful message, and yet it still implies, that never mind, it will soon be over and then you can go back to using as much water as you want. We need to highlight a far smarter message.3 It should be as follows: the UK requires a 14% reduction in water use down from 150 litres to 130 litres/person/day and that using water sustainably is something we should be doing all the time, across the whole of the UK, not just during a drought and not just in the south east.

This blog is an edited version of the article that appeared in the summer edition of Green Building Magazine – for more detail you can download the full version of this article.