Mali is a large country in West Africa (1,242,000 km2) with a population of 20 Million who live mainly in the south and the centre, as the north of the country is part of the Sahara desert. Rainfall varies across the country. In the north (Saharian area, 51% of Mali’s area) rainfall is less than 200mm a year. In the centre (Sahalian area, 26% of Mali) rainfall is 200 – 600 mm per year. In the south (Sudanian area, 17% of Mali) precipitation is 600-1200 mm per year, and there are some smaller areas where rainfall is more than 1200mm a year. 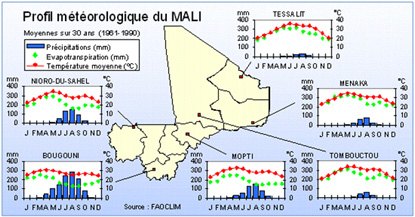 There are two very large rivers, the Senegal and the Niger, These rivers, and their tributaries, are the main source of water for the population, and there is also a plentiful supply of ground water in many area of the country. Bamako (the capital) is on the river Niger. In the north there are no large rivers; population is very sparse at 2 people per km2.

Most water (90%) in Mali is used for agriculture and is needed from June to December. In 2000, water for domestic use was estimated at 590 million m3 per year (9 per cent), while industry accounted for about 56 million m3/year (1 percent).

Average water consumption per individual is lower than European countries at:

The main reasons for low water consumption are that most houses, even in Bamako, have a dry toilet outside (a few have a flush toilet inside as well) and the majority of the population (78%) take a shower rather than a bath.

Piped water is provided by EDM (Energy of Mali), which is owned by the Government. In 2006 it was privatised but after just two years it was renationalised. Water from the piped supply is subsidised by the Government. There are two different prices for water. Where there has been a piped supply for a long time the cost of water is cheaper (classified as with subscription) and costs 113 FCFA (West African Franc)/m3. (£0.14/m3). For newer customers, on the extended piped network, the cost is 604 FCFA /m3. (£0.79/m3). 6% of the population are connected to the piped water supply but do not have to pay for it ; they are officials and members of Government.

Neighbourhoods in cities that are not connected to a piped supply can either collect water from privately owned fountains (where it costs 10 FCFA (1p) for 20 litres) or buy it from small water sellers who fill containers at the fountains and resell to households at 75 FCFA for 20 litres. 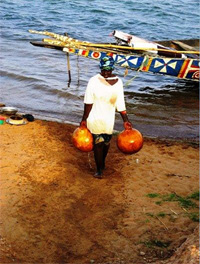 “In rural areas of Mali, just 49% of the population have access to potable water (and only 5% have access to sanitation). (2009 figures). Some of the water is from traditional wells (numbering an estimated 800,000 and not necessarily meeting standards) and some is from modern water sources (e.g. drilled wells with pumps or cistern wells, estimated at 3,000 modern wells and nearly 9,000 pumps).

When there is no access to a well in the village it is the responsibility of women to fetch the water, and this can be a 5 to 15km round trip per day to the nearest river or water court (small lake).