Those of you who read the blog avidly will know I was camping in France in the summer, and were no doubt confused that whilst I listed the vagaries of showers in French campsites I hadn’t touched on the carbon content therein as I did when showering in Austria and the Czech Republic. Well, my plans got thrown up in the air a bit because of Brexit and Poolgate, both of which I blogged about. But here, slightly late, is my tale of extreme showering in France.

Having an electric shower in France is a different kettle of fish from having one in the UK. Not the feel of the shower, nor the type (pretty ubiquitous, the shower market across Europe), nor the flow rate (though pressure is generally higher in France) and price is pretty similar to the UK. It’s nothing that you can actually put your finger on (or under I guess since we are talking showers); it’s about who owns the electricity that is heating your shower and the generating mix therein.

Firstly, pretty much all the electricity used in France is generated by EDF, which is owned by the French Government. Yes, a nationalised industry… and the same EDF incidentally that is one of the Big Six electricity providers in the UK and who will co-own (along with the Chinese Government) Hinckley Point C. And secondly, because 95% of the electricity generated by EDF does not produce CO2 emissions, coming as it does from nuclear and hydroelectric. So showering in a virtually carbon free, nationalised shower.

Hydroelectricity plants account for 20% of installed capacity in France (20 GW of installed capacity from 439 hydroelectric plants) and nuclear for approximate 75%. (Compared to 2% hydro and 21% nuclear in the UK.) This generating mix has a massive impact on the carbon footprint of the electricity produced. Only July 15th there was just 28 grammes of CO2 in every kWh of electricity that France was using and hydro provided 6,215 MW of power compared to 947 MW from gas, oil and coal combined. (http://www.rte-france.com/en/eco2mix/eco2mix-co2-en). At the same time UK electricity was being produced at about 520 grammes CO2/kWh. 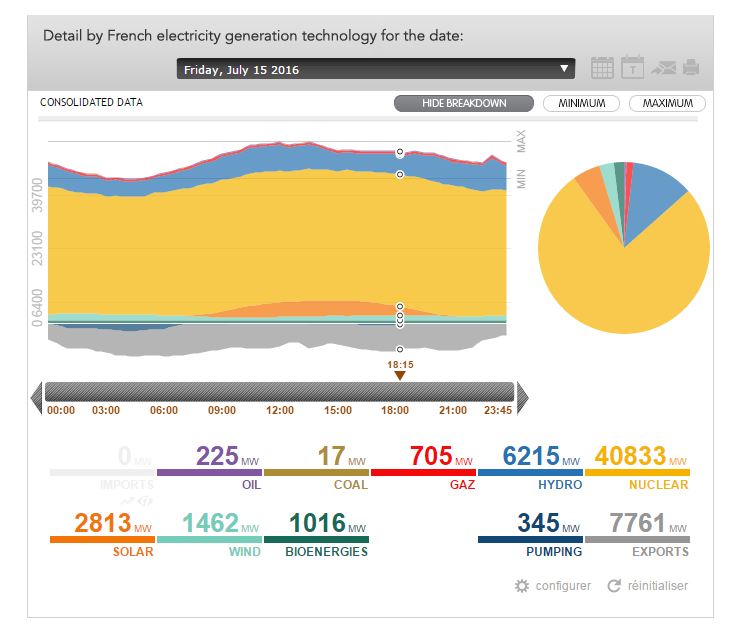 How does hydro work?

The principle is simple and relies on the force of gravity: potential energy from water stored at height is converted into mechanical energy by means of a turbine, which is in turn converted into electrical energy using a generator. Water is held back (1) by a dam built across a valley. When the sluice gates are opened, the water flows into a penstock or channel (2) which directs it towards the power plant. The water causes a turbine to rotate (3), which drives the generator (4), to produce electricity, which is fed into the national grid (5) where it is transmitted along high voltage power lines. Outside the power plant, the water returns to the river via the tail-race (6). 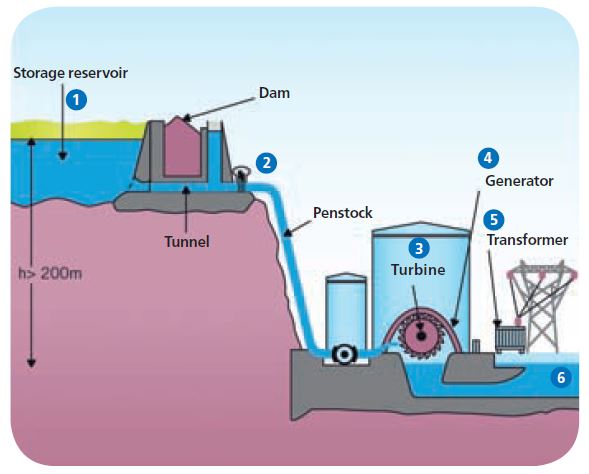 Once a hydro plant has been built, there are relatively low operational and maintenance costs. But investment costs are high and not just monetarily. Land is inundated which means loss of wildlife habitat and, in some cases, displacement of local populations. And streams and rivers below the dam can result in loss of water quality. And, as we were about to discover, there is also the potential for sudden and unexpected flood events even in fine weather.

We arrived at a campsite, late in the evening, in the rain, at a small town somewhere in the south of France where, as usual, we had to break in to pitch the tent because the campsite manager (not unfairly) had gone home for the night. As if that wasn’t exciting enough, the fellow campers who had let us past security, then informed us that the whole campsite was a ‘calme apparent, risqué present’ zone, and handed us the appropriate evacuation procedure sheet emblazoned with its stickers of what we could expect at any moment.  A hydroelectric plant can reach its maximum capacity within a few minutes, (as opposed to about 10 hours for a conventional fossil-fired plant and about forty hours for a nuclear reactor). But to do that it releases a large amount of water very rapidly, and therein lies the danger. If France suddenly had an urgent requirement for electricity they would open up the dam gates, a siren would sound and we would have to leave the campsite for higher ground taking only our passports!

That seemed fine but the burning question was, when should we have a shower? After all, no-one wants to evacuate wearing only a towel and with shampoo in your hair… I worked out that between 3 – 4 am would probably be the optimum time, as unlikely to be a sudden demand on the grid at that hour of the night. But hey, I like living dangerously, so decided to chance it all by going for the 8am slot. It was weird showering with passport at hand, but it seemed rude not to, given all the stern warnings.

Ummm, and that’s it. No urgent requirement for electricity. No sudden rise in water levels. No siren. No evacuation. No near escape. No story for the blog!