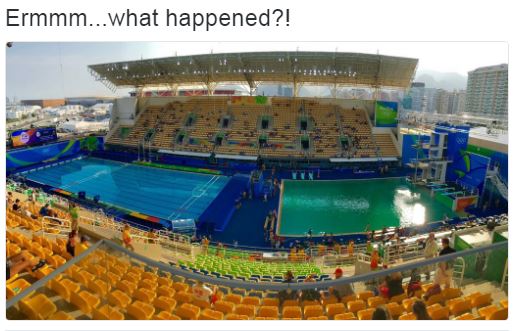 Never one to miss a trick this month’s blog asks whether the divers forgetting to take their obligatory pre public pool shower was the reason for Poolgate, as suggested by some commentators following Tom Daley’s tweet; or an over keenness on the part of the Olympic organisers to save a few reals by skimping on the chemicals.

If you’ve been watching any of the diving you will see that for people who spend a large amount of their working day diving into chlorine rich waters they also spend a lot of time showering off afterwards, and now (in a nod to the communal baths of the past) sitting in large warm pools with their fellow competitors. But actually the showers are to get rid of the chlorine and the communal baths to warm them up.

Swimming pools (or diving pools) are disinfected to prevent the build-up of bacteria that could prove harmful to health, and like most public swimming pools the Olympic ones use chlorine to disinfect the water. The amount of chlorine required depends on the number of people using the pool and the length of time they are in there. It also depends on how ‘dirty’ the pool users are, hence the requirement to shower beforehand. If you look at the divers, they stand around a lot in between dives. When it’s warm they are sweating a lot; they dive into the pool and get out of the water quickly but the sweat is washed off. A person loses nutrients when they sweat and the nutrients in the sweat react with the chlorine in the water which then becomes ‘used chlorine’. This means it isn’t available to oxidise nutrients or other organic substances that arrive into the pool. Algae requires nutrients to proliferate so suddenly… BOOM, Poolgate.

You could argue that competitors should be required to have a proper shower, i.e. with soap, before every dive, though I assume that would interfere with the fake tans so might not prove super popular with some competitors. Interestingly, Poolgate was followed by complaints that the water polo pool was causing the athletes’ eyes to sting. Although first assumptions would be that the pool was overchlorinated to prevent Poolgate spreading, actually it’s the complete opposite! Chlorine combined with ammonia (present in both sweat and urine) produces chloramines which cause eye irritation and an objectionable chlorine odour. So, when chlorine can be smelt around a pool it is not that there is too much chlorine in the pool, but too much combined chlorine and more chlorine must be added to increase the free chlorine level. So, again, a cost cutting exercise.

Anyway if you want to know more about swimming pools and disinfection (though without the gold medals) check out my should I shower before I swim? blog. 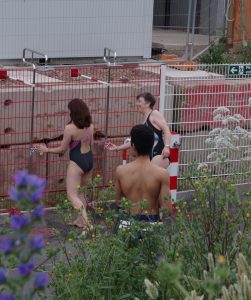 After all, loyal readers, this isn’t the way the shower blog is going to evolve, starting off with the mere mention of a shower before diverging into something completely different. And also because I have another cold shower experience to report. This time in the middle of a building site, in King’s Cross, on a cold grey evening in June. As this photo proves – the smile before the aaaagghhh!

I know you are probably all thinking: ‘big respect to you there Cath, that is definitely one step further than you need to go re sampling different showers for the blog.’ Well, thank you, though there is, as ever, a catch. I hadn’t gone all that way to just have a cold shower and leaveagain. If I wanted to swim in the King’s Cross pool a cold shower was the quid pro quo.

The pool is actually an art installation (Of Soil and Water) which is kind of hard to get your head around, designed by architects Eva Pfannes and Sylvain Hartenberg and artist Marjetica Potrčas as part of the King’s Cross public art program RELAY, and aims to make users think about the relationship between nature and the urban environment. It is a natural pool, which means that no chemicals are used to treat it. 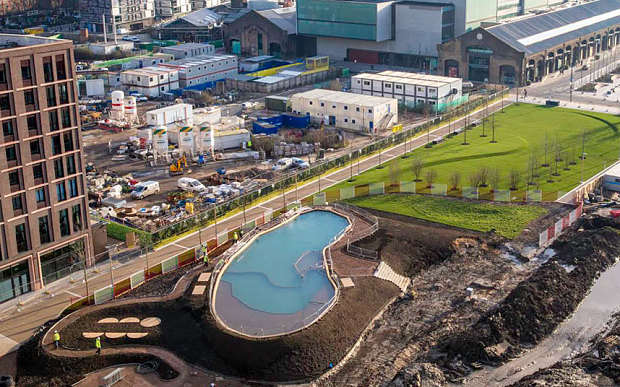 There is a swimming zone, a regeneration zone and a filtration zone. The pool holds 600m3 of water and can cope with 163 people a day. Any more and the natural cleaning mechanism will be overwhelmed, there will be a build-up of nutrients and Poolgate will happen here too. Only about half the pond is available to swim in, but swimmers can hang over the dividing wall between the swimming zone and the regeneration zone which is kind of cool

A standard swimming pool is kept clean by chemicals – usually chlorine. In a natural pond there are no chemicals so plants, microscopic animals and physical filtration processes provide the cleaning. In the regeneration zone plants absorb the nutrients which they convert into plant mass and oxygen. Algae and pathogenic bacteria are consumed by the zooplankton (which are microscopic invertebrate animals). In the filter zone limestone gravel beds help to buffer the pH of the water. A biofilm forms on top of the gavel, inhabited by aerobic bacteria which feed on the nutrients brought into the pool by the bathers (skin, hair, sweat etc.). The biofilm mineralises the organic matter and reduces the content of pathogenic bacteria. There are skimmers to skim off large particles and phosphates (which arrive in the pool from run-off from the planted beds when it rains, and mains water top-up) are constantly being absorbed and removed from the pool. This is important because too much phosphate leads to algal blooming or eutrophication. The phosphate absorber runs 24 hours a day; eventually the absorber (black carbon?) becomes exhausted and has to be replaced.

Of course, it’s not like swimming in a river or lake. There is still energy required to run the pumps that circulate the water and evaporation requires constant topping up from the mains. (You can read my article on Natural pools –environmental nirvana? to find out more on this aspect). But it is fab. Umm Cath shower blog?? (Prod with a sharp stick ED).

Ah yes, the cold shower. For some reason we had to have a shower when we got out as well. Though this time it seemed positively toasty compared to the pool itself. And then I went to get my clothes out from the locker only to find that my key wouldn’t work in the padlock. Eventually the pool attendant cut the lock off so I could access my clothes only to find it wasn’t my bag at all! I blame the cold shower myself for numbing the brain, and so the cycle is neatly joined and the blog ends.