Ireland’s forty shades of green are something that we’re proud of – despite the rain that gives us that diversity of landscape texture and colour. Anyway, what I want to write about today is the extra colours and textures that we’re not quite so proud of, ponded percolation areas, effluent runoff from failed systems and raw sewage discharges to our coastal waters. Don’t get me wrong, the situation has improved greatly in the past 20 years. Most unsewered municipal areas are now collected and treated prior to discharge, while on the domestic scale, the EPA Code of Practice on domestic scale wastewater treatment systems makes it much trickier to build new houses on land that is unsuitable for septic tank and percolation systems.

However, there are still too many municipal areas, small and large, which discharge raw sewage directly to our seas, and too many failing domestic systems that don’t have an easy, effective solution under current guidelines. For readers from outside Ireland, or those of you here at home who haven’t been studying the Irish sewage related legislation closely… here’s a very quick snapshot of our recent sanitation history: The Environmental Protection Agency updated older septic tank guidance in 2000 to include mechanical treatment systems, filter systems, reed beds, constructed wetlands and a selection of disposal options. All of the disposal options were for disposal via infiltration to ground. Surface discharges were mentioned, but since the local authorities don’t permit these, then discharges to ground (essentially to groundwater)  remain the only available option. In 2010 this EPA Code of Practice became a legal document, not just a guidance document – however there was no guidance for sites with poor soakage, which constitute about half of the country, which is something of a limitation.

About the same time, an EU court judgement put pressure on the government to start a septic tank inspection programme. This has been rolled out, but is somewhat underwhelming as an environmental protection measure for a variety of reasons. Not least because the numbers of tanks inspected is very small, and you can’t even volunteer for inspection to fast track the planning process in order to install something better. In parallel with this, the EPA and Wexford County Council (where heavy clay soils abound) commissioned research into options for poor sites, including drip irrigation systems and zero discharge willow facilities. 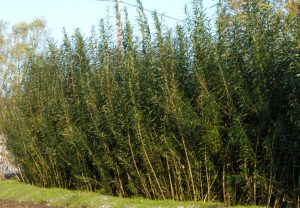 These are expected to form part of the next update to the Code of Practice. In the meantime, those who want to upgrade their system have to go through the same planning process as those wanting to build a new house, with the same application fees and often similar professional fees – all to just upgrade a patently polluting system to something more eco-friendly. On occasion I have seen such applications refused – and that’s where most clients back off and say that they’ll leave environmental protection to the next generation to take care of.

I’m impatient by nature. Perhaps it’s my goldfish memory – I think like a fish. And for many of our fish and other freshwater species, raw and partially treated discharges equate to holding your breath until the next official action comes along to deliver another small incremental improvement; all the while seeing more and more development and further pressures on the overall aquatic ecosystem.

But just getting sewage clean isn’t necessarily enough any more.  With climate change very much front and centre of the challenges we face, we cannot necessarily continue to throw energy at our sanitation problems to make them go away.  The refugee crisis in the Middle East and North Africa, to take just one example, is in no small part due to the destruction of farms and failure of crop yields caused by successive droughts. Flooding, storms, coastal erosion, ocean acidification and biodiversity loss are all tied up in the same issue. So how do we deal with our wastewater effectively without pumping and mechanical oxygenation?

Sanitation need not be a problem to be solved, it could be part of the solution that we are looking for. The interlinking here is worth examining, so bear with me if you will. We currently use high electricity inputs to treat sewage so that we render nutrients and biomass less harmful to our freshwaters and seas. We currently import phosphate fertiliser, which, incidentally, is a limited resource with an expiry date firmly in our sights. We manufacture nitrogenous fertilisers using huge energy input – more than steel by weight of finished product! Soil erosion from overuse of nitrogen fertilisers and other modern agricultural practices is raising serious doubts about our capacity to continue growing food for our tables.

So, let’s see, on the one hand we have the problem of oversupply of nutrients and biomass leaving our many flush toilets. On the other hand we have a serious energy footprint issue associated with conventional agricultural fertilisers. Although it takes a leap of faith that these two issues can be matched up properly, it only takes the logic of a three year old to see that it makes sense to start trying.

At the Paris Accord last year an aspirational temperature increase of 1.5°C was adopted by the leaders of the countries of the world. Although without teeth to actually enforce change, this temperature limit flagged the seriousness with which our politicians finally treat the current threat of climate change. However, since that time, the temperature of the planet has been rising steadily and new figures show that we are close to the 1.5°C rise already[1].

In order to meet the Paris Accord aspiration we’ll need to cut down on energy use wherever possible, and also to generate alternative energy sources where we can. In the area of sanitation, there are many technologies that can help us do this, but they are not currently part of mainstream guidance, and as such are generally excluded as an option.

For example, willows on any sewage treatment site will mop up nitrate and phosphate pollution and produce firewood or biomass chips for fuel. New high-spec gravity splitter units recently developed in Co. Sligo can be used to negate pumping on sites where suitable falls exist. They also enable willows to be used on standard percolation areas which would otherwise be clogged by the roots.

Dry toilet systems are many and varied, and can be used to keep nitrates, phosphates and biomass out of our water and recirculate it back to our soil for growing food. There are many ways to safely reuse humanure and urine as soil conditioners and fertilisers, and thus reduce our dependence on chemical fertilisers.

Even by using existing flush toilets, we can route effluent through woodchip filter systems to recoup nutrients and biomass. The flush water can then be used as a nutrient source for willows or fruit trees or other biomass or food crops in a way that doesn’t involve any contact between the top growth and irrigation water inputs.

There’s so much that can be done to make this whole infrastructure more eco-friendly and it would be wonderful if the EPA could do all they can to support this by stepping outside of the usual run-of-the-mill solutions. Much good work has already been done though. Composting units are already mentioned in the EPA Code of Practice. Willow facilities have been investigated and written about in the new EPA Research Report[2]. However a lack of thorough follow up guidance makes it harder for local authorities to accept these than standard systems. 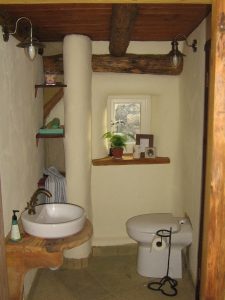 What I’d love to see coming from the EPA at this time is an active bias towards systems, technologies and methodologies that actively sequester carbon and minimise electricity and embedded energy inputs. Not that the standard mechanical systems don’t have a part to play, but that at least an explicit verbal suggestion be made to planners and environment officers to be open to more environmentally sustainable options.

I realise that if a standard or code is available then it’s easier to have a system accepted at EPA and local authority level. However dry toilets and willow percolation areas, to cite just two examples, are, at their simplest, very low cost systems. As such it is not economically viable for sewage treatment system companies to go through the expensive testing process required to gain the recognised standard. That is why it is so important for the EPA and local authorities to take the lead on this and to include these and other similarly low-cost, low-tech, high efficiency systems as acceptable or even preferred options.

How would it look in 10 years’ time if, instead of having flush toilet systems that pollute our drinking water and waste biomass, we have systems that generate rich compost to displace chemical fertilisers and move towards a more sustainable sanitation infrastructure and agriculture in the one movement?

Every industry can actively move towards more sustainable ways of doing business – and now is an excellent opportunity for the sewage treatment industry to move in the right direction.

Féidhlim Harty is director of FH Wetland Systems environmental consultancy and author of Septic Tank Options and Alternatives – Your Guide to Conventional, Natural and Eco-friendly Methods

and Technologies. See www.wetlandsystems.ie for details.