A couple of years back a ten year old girl (one of thousands or primary school children who I have been lucky enough to chat to about being water smart over the last few years) told me that at her home there was a problem with the plumbing which meant that after five minutes in the shower the water always went off. Her mum said it must be because they lived in a flat. What did I think? Well, not for a nanosecond did I think it was a power shower draining the CWSC (as blogged about previously). What I did think, obviously, was ‘Genius mum!’ But not wanting to blow her cover settled for ‘I haven’t heard of that happening before but you never know in flats…’

I mention this because tales of polar bears and their shrinking icebergs don’t yet (I live in hope!) resonate with Sam (13) who has been living with us since Jan 31st. Turning the water supply off at the mains after five minutes – we have a combi boiler – before turning it back on at a vastly lower flow rate, does, in that she has mentioned that she notices that sometimes this is what happens to the water. Unfortunately the ‘sometimes’ is spot on as unless it’s the weekend, Sam is first in the shower and I am still half asleep in bed, with the sound of her inordinately long showers running through my head coupled with images of polar bears in dire distress. 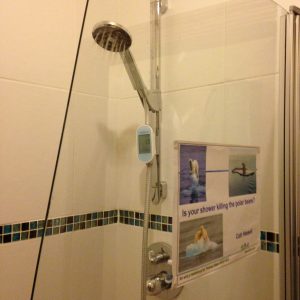 I have taken to putting my ‘Is your shower killing the polar bears?’ screen shot on the bathroom door, and, at one point, even moved it onto the shower screen. Sam is still notably unimpressed. When I tried to engage her in whether the polar bears poster had had an effect or not, she said she hadn’t really noticed it! She then informed me that she got in the shower at 7 am and got out at five past though sometimes it was ten past, and that the shower timer was a really bad idea because it just put her off because then you had to watch the sand instead of washing.

So I was a bit stumped until I remembered that since I now have version b1 of the amphiro shower – I blogged about my a1 version back in Dec 2014 – I had the data on my phone to prove quite how long she spends in there. Result!

So what happened? Well I produced a fabulous spreadsheet and crunched the numbers, and had soooooo much fun that now every shower blog will be a variation on this theme – hooray! (Aaagghhh… please… no! Ed in charge of keeping blog reader numbers up). 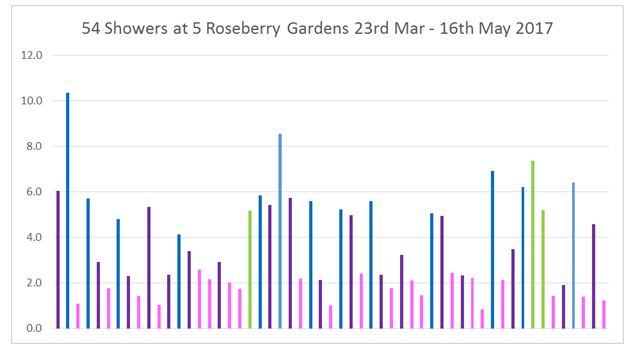 So, this is what the data showed… Cool graph huh? Though it’s important to ask how robust is this data? As you can see its 54 showers across a period of 54 days. Which given the fact there are three of us living there and we all shower once a day means there are a lot of missing showers. To store the data the app requires me to take my phone into the bathroom when I have a shower. It then downloads any showers that have been taken in the intervening time (up to a point). For example, if I don’t take it into the shower for a few days it doesn’t pick up all the intervening showers. Secondly, if the signal is weak, it picks up my shower only, but then the next time if the signal is strong will pick up the previously missed ones as well – confusing!. Hence why it looks like I (pink) shower more than anyone else. Also allocating the shower to each person was a bit tricky as I was so lax about taking the phone in (though not anymore!), so I wasn’t sure which data had been lost, nor the dates of the data I did have etc. We also don’t always have our showers in the same order, though it’s usually Sam (blue), then me, then Suhith (purple), apart from at the weekend when that order is turned on its head. Plus sometimes Sam is back up in Leicester or we have guests (green) staying. Added to which here is also an inaccuracy of +/- 10% at least with the data.

But despite all of the above, it’s still very instructive.  For all showers, average shower time is 3.7 minutes while the median is a lot lower at 2.9 minutes. And the range is wide, with the longest shower, (10.3 minutes) ten times as long as the shortest (1 minute) one. 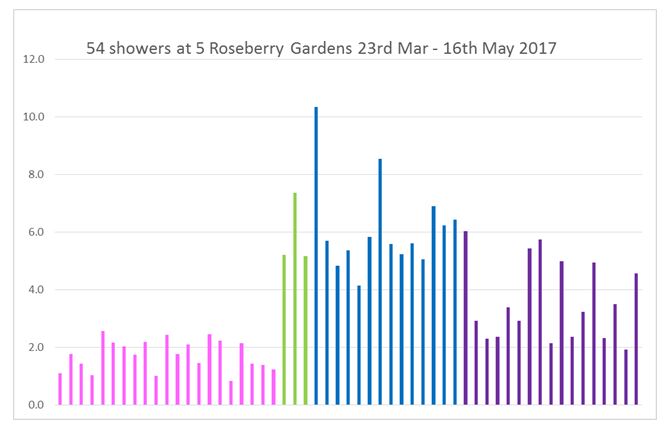 When we group the showerers together, other interesting patterns emerge – so interesting this graph now has pride of place in our kitchen! The starkest one for me is how often Suhith has a shower that is longer than four minutes! Plus the difference in range of her shower times. Suhith says she only has longer showers when she’s washing her hair. Which on the above graph seems to be most of the time… But since we have missing data in here, for the moment I will believe her!  And I guess at least her average shower time at 3.6 minutes, comes in under the magic four minute range. The guests presumably don’t ignore the fact they are supposed to be having a short shower – certainly James (5.2 minutes) and Ols (7.4 minutes) noticed what rating they got on their shower (B and C respectively) – so I can only assume they are in the shower longer when at their own homes. I am just a super duper efficient showerer at 1.7 minutes average, though I am not a speedy showerer in that mine has periods when I am standing there with the shower turned off while I soap or shampoo up. I’m also rarely the first person into the shower so no need to run it to heat it up. And then there is Sam… As she told me, most of her showers are between five to six minutes though the couple of far longer ones at 8.6 and 10.3 minutes brings her average up to just over six minutes. Are those the days she showers after school instead of before? Or are they a weekend and I am not as on it car bonnet as I need to be with regard to ‘adjusting – ahem – the flow rate? More research should tease that out. I can’t wait! J

And, finally, what would make Sam have a four minute shower? I’m sure bribery would work but don’t want to go down that route yet. So I’m wondering where London Zoo have any recently deceased polar bear cubs which they don’t need and I could put one in the bath…

May 2017 – crunching the numbers at 5 Roseberry Gardens