Normally, if hot water comes out of the shower when you have set it to cold you think, ‘bloody plumber!’ And usually you would be right. Happens to the best of us. Plumbers that it. Though to be fair isn’t a plumbing gaffe that I made in my career – though I def made a few. It happened to Jlad’s (nephew) flash stand-alone bath and also to Christopper’s (bro) snazzy new shower. The latter did offer to give me the inside gen behind this sad state of affairs, which I accepted with alacrity. But then no details were forthcoming. Ho hum…

Occasionally in the UK you get the issue of a cold tap running warm because the pipe sits alongside an unlagged central heating or hot water pipe. Whilst this is a waste of water while you run the cold tap to get rid of the warm water, it doesn’t really fall into the category of this blog.

But if you live in Dubai, when the cold shower runs hot is a yearly occurrence and isn’t the fault of the plumber. How do I know this? Well, it’s a showering tale courtesy of second cousin John twice removed, who once upon a time lived for three years in Dubai on a diplomatic posting – Vice Consul at the Australian Consulate no less – though that position might not be as flash as it sounds. Second cousin John twice removed, a man who has more favourite football teams than you can shake a stick at. If I tell you his most recent favourite team is Lille – a team he didn’t even know existed until about a week ago – purely because they have just won the French league,  and before that when it looked like Liverpool wouldn’t get into the champions league and Leicester would then we (LCFC) suddenly became his favourite team. All of which means that he only appears in this blog cos he’s family and has some fab photos, especially of his local water tower. And because my other option was ‘showering or not showering in lockdown surveys’, which even I was finding hard to get enthused by.

Anyway, back to Dubai where, according to John, there are ‘many little life hacks you learn when living in Dubai for coping with the extreme and overbearing heat’.

Cue a graph from me (as you would expect) of average maximum and minimum monthly temps in Dubai and one of London for comparison.

So yeah, pretty damn hot. Even in winter if you are used to UK summers!

Before we get onto John’s story a bit more info about water in Dubai (and the UAE in general) since you can’t really talk about showering in Dubai without mentioning water shortages and desalination. The UAE has no rivers and while it does have reserves of groundwater, large parts are saline and recharge rates are virtually zero due to the little rainfall the country receives, just 55mm a year on average. Groundwater is used for agriculture only.

Average rainfall by month in Dubai

This means that water for homes, commercial buildings and industry is supplied by desalination. The UAE has almost 70 seawater desalination plants, around 14% of the world’s total output of desalinated water, an astonishingly high proportion for such a small country, led by its staggeringly high household demand of 550 litres of water/person/day. 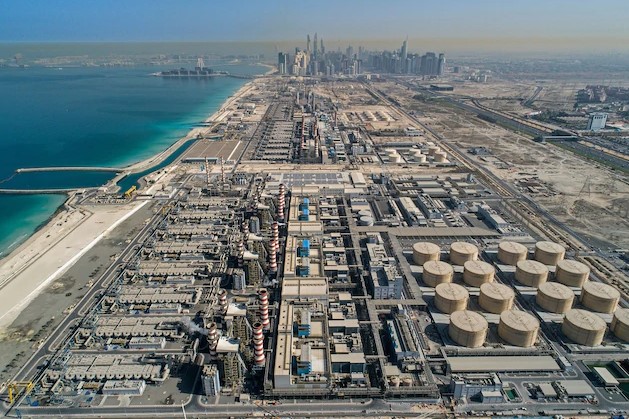 Most desalination plants work by reverse osmosis, meaning energy is needed to push water past a membrane at high pressure in order to separate the salt from the water. This technique requires large amounts of electricity.  A typical plant takes an average of 2.2 – 2.8 kWh of electricity for every m3 of water that is produced. Dubai produces most of its electricity in gas fired power plants. And despite a pledge to produce all of its electricity from renewables by 2030, in 2020 opened a coal fired power plant, which is designed to meet 20% of Dubai’s electrical demand. This means that desalinated water has a large carbon footprint too.

And desalination plants don’t just produce desalinated water. They also produce brine, the concentrated salt water that’s left after desalination. Recent research by the United Nations University in Canada found that the average desalination plant actually produced 1.5 times more brine than desalinated water – 50% more than previously thought – which amount to 51.8 billion m3 of brine each year across the world. Brine is substantially higher in salinity than normal oceanic water and is warm, which makes it more difficult for marine life in the immediate vicinity of the discharge to survive or thrive. Chemicals such as copper and chlorine are added to the seawater at various stages in the desalination process, to control bacterial growth or reduce corrosion, and many end up in the wastewater. Chronic exposure to these chemicals may lead to environmental impacts around outfalls, with pollutants such as metals potentially accumulating in the food chain. [1]

Back to John’s life hack. 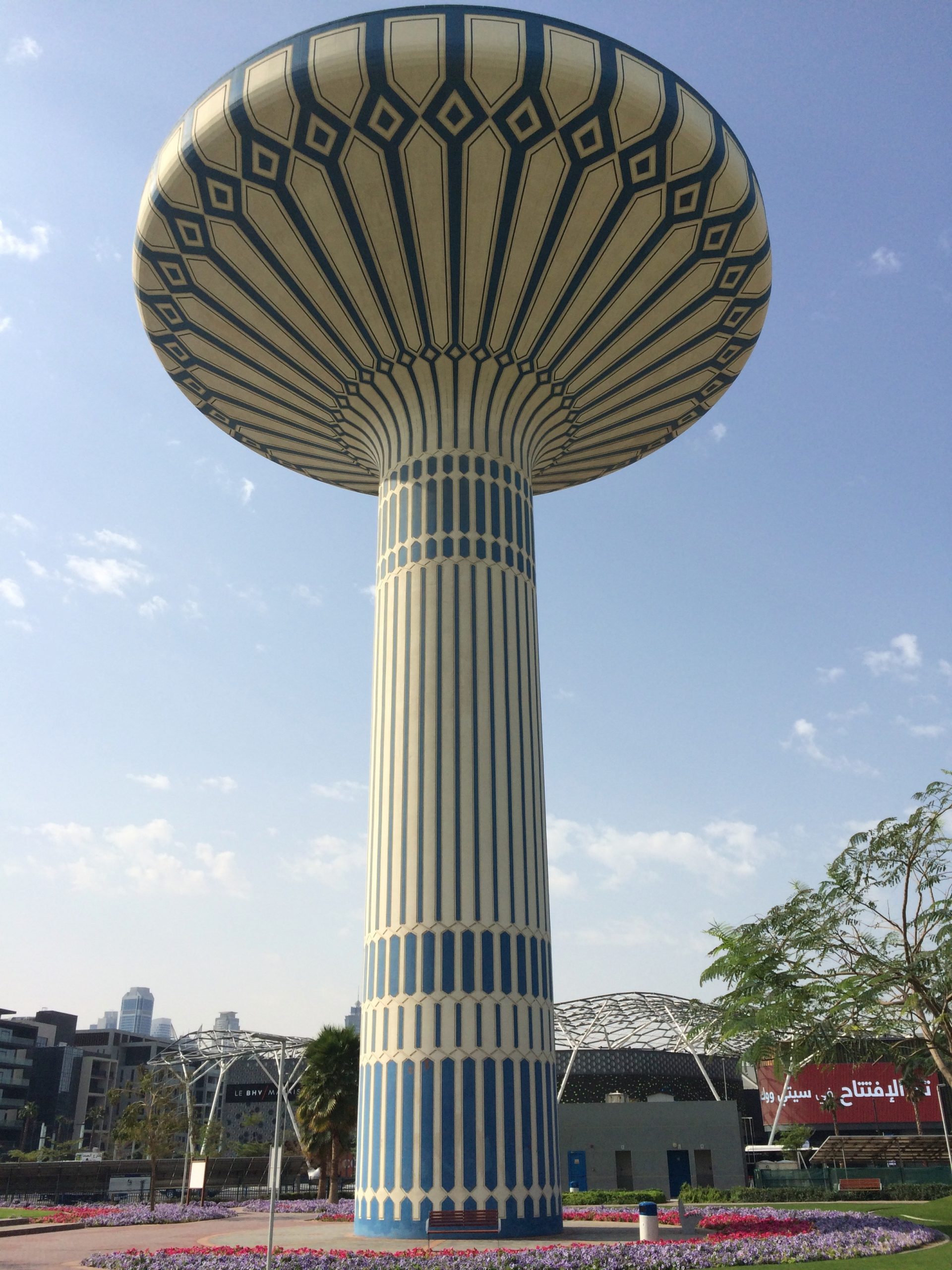 The villa we lived in, like many in Dubai, had four bedrooms, each with an ensuite bathroom tiled in marble and there were six toilets in the property.  Each bathroom, laundry and kitchen has a switch to turn on the hot water, as each set of taps has its own individual boiler. (Blimey!) There comes a point in time around May / June where the sun becomes so hot it heats the water supply pipes to the building to near boiling, meaning that the cold tap delivers piping hot water. (I think this must mean that the supply pipes are above ground. And that the stored water from the water towers is also heated up due to the massively high temperatures outside. If there is also water storage on the top of individual buildings that would add to the issue.) It’s at this point you turn off the power switch for the boiler.  As the boilers are internal, the water they hold stays nice and cool (I assume that is because of the air con units inside buildings).  You then use your hot tap for cold water and your cold tap for hot.  (Simples!) If one shower runs out of cold you just go to one of the other four bathrooms. (!!??!!) Then in about November/December when the weather cools down, you find the sweet spot to switch the boilers back on and it’s back to normal.

I should also mention the strange experience of going to the toilet in summer due to the naturally heated hot toilet water… that is something to get used to as well! (Sounds like a miniature sauna for your bum!)

So there you have it. The shower blog. Providing advice to wannabe diplomats around the world. And to end, John’s rather cool outside shower at the villa – just poking out from behind the banana palm. 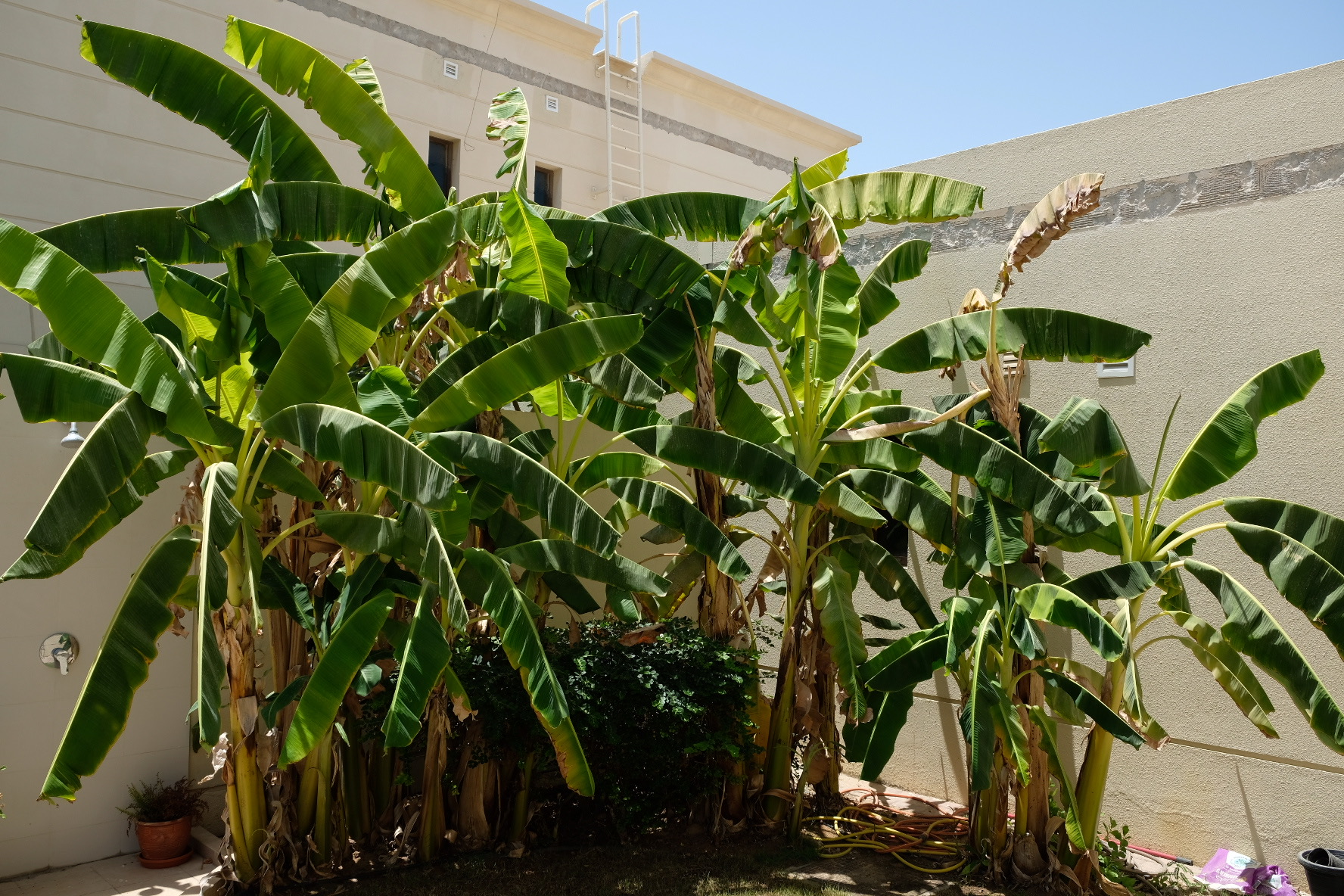