I love this statement sooooooo much I use it often. In fact I have even written a shower blog called ‘Not waving but drowning’ before. Though, re-reading the blog I have no idea quite why I called it that. The statement appears in the title and then never again! That blog was, at least, about showering, or to be more accurate, how I tried the four minute bath challenge when our shower was out of action. This one not so much. But Protea down the Thames and its aftermath has dominated the whole of my June.

To begin at the beginning. What could be better than a relaxing trip up the River Thames from Limehouse Basin to Brentford Lock on a baking hot June afternoon with a group of friends? Well, nothing, but that isn’t quite how this one turned out…

It’s a trip Suhith and I have done six times successfully before (and once the other way, though that was sooooooo stressful we won’t be repeating it ever!) with various lucky friends and family. It’s exciting with views to die for, though it can feel perilous at times. After all a canal boat isn’t geared up for waves, the river can be distinctly choppy with even a bit of a wind, and you also get hit by the waves from the wake of the Thame’s clippers (now rebranded as UberBoats) as they go past. But you quickly get used to the bucking motion as you ride the waves and the noise as the propeller sucks in air instead of water, and the clippers aren’t coming by all the time. Soon after leaving Limehouse you round a bend, the waves die down and then it’s only the occasional clipper rocking you sideways. By now it’s just cool to be out on the river, as you pass under Tower Bridge, past Tower of London and traitor’s gate, Tate Modern, the London Eye, and Houses of Parliament. By the latter two the Thame’s clippers are no more and it’s just this easy cruise that is completely worth the schlep through the broken locks and rubbish strewn and blanket weed filled lower stretches of the Grand Union, even when it’s raining and, frankly, freezing. 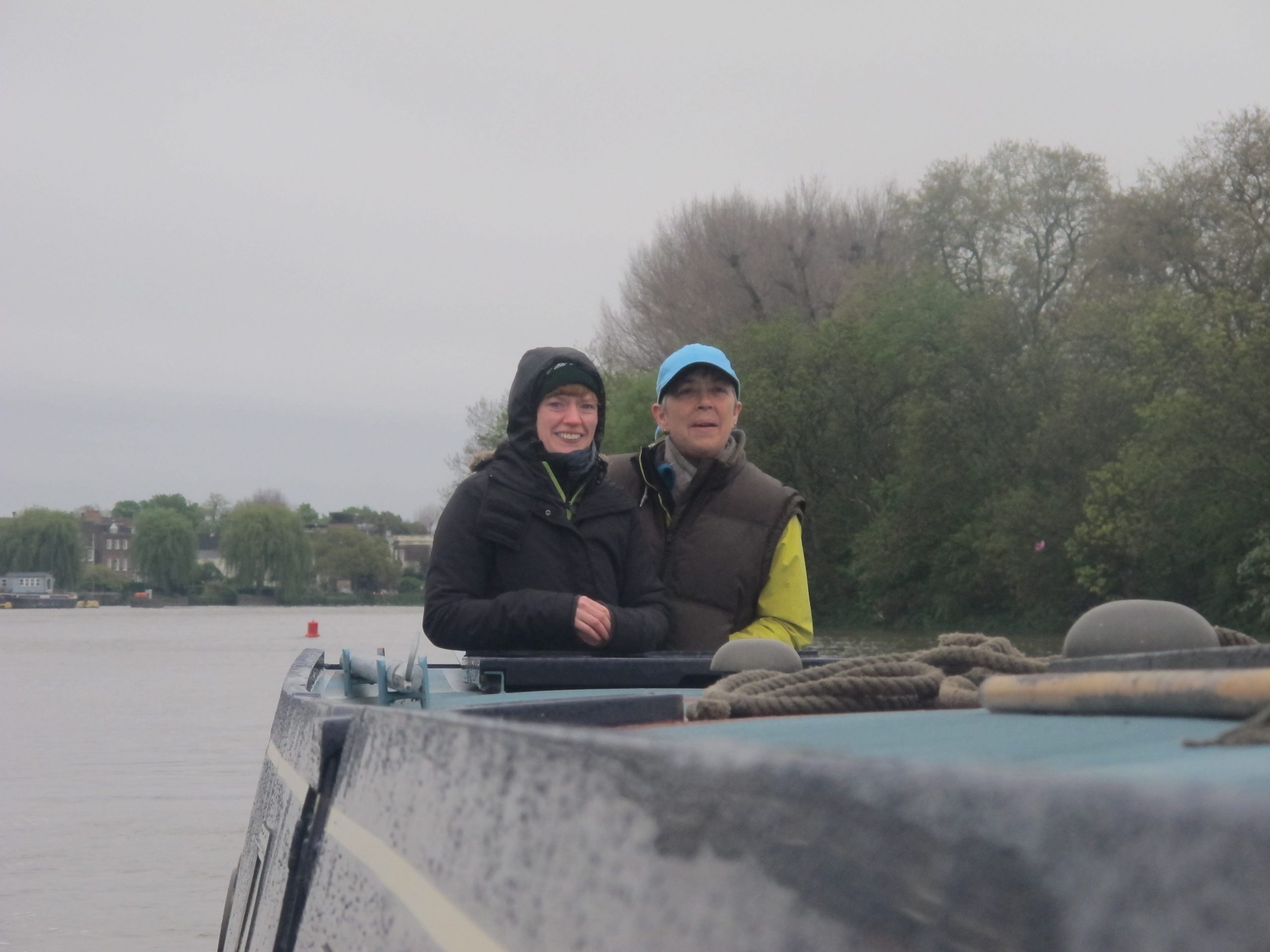 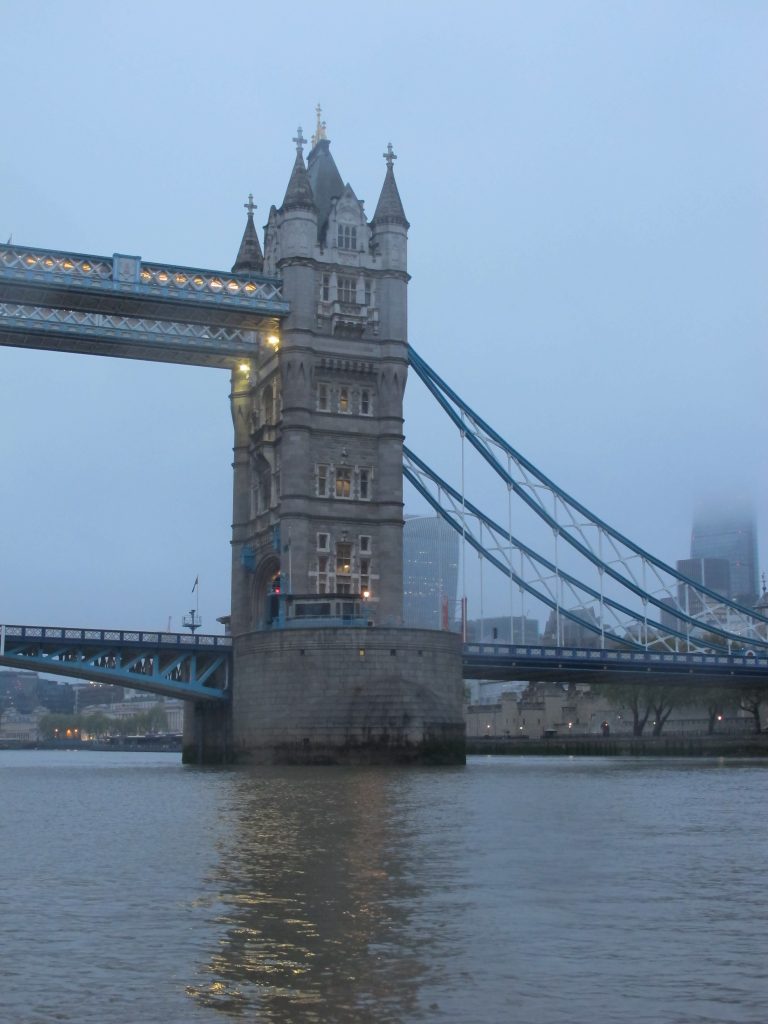 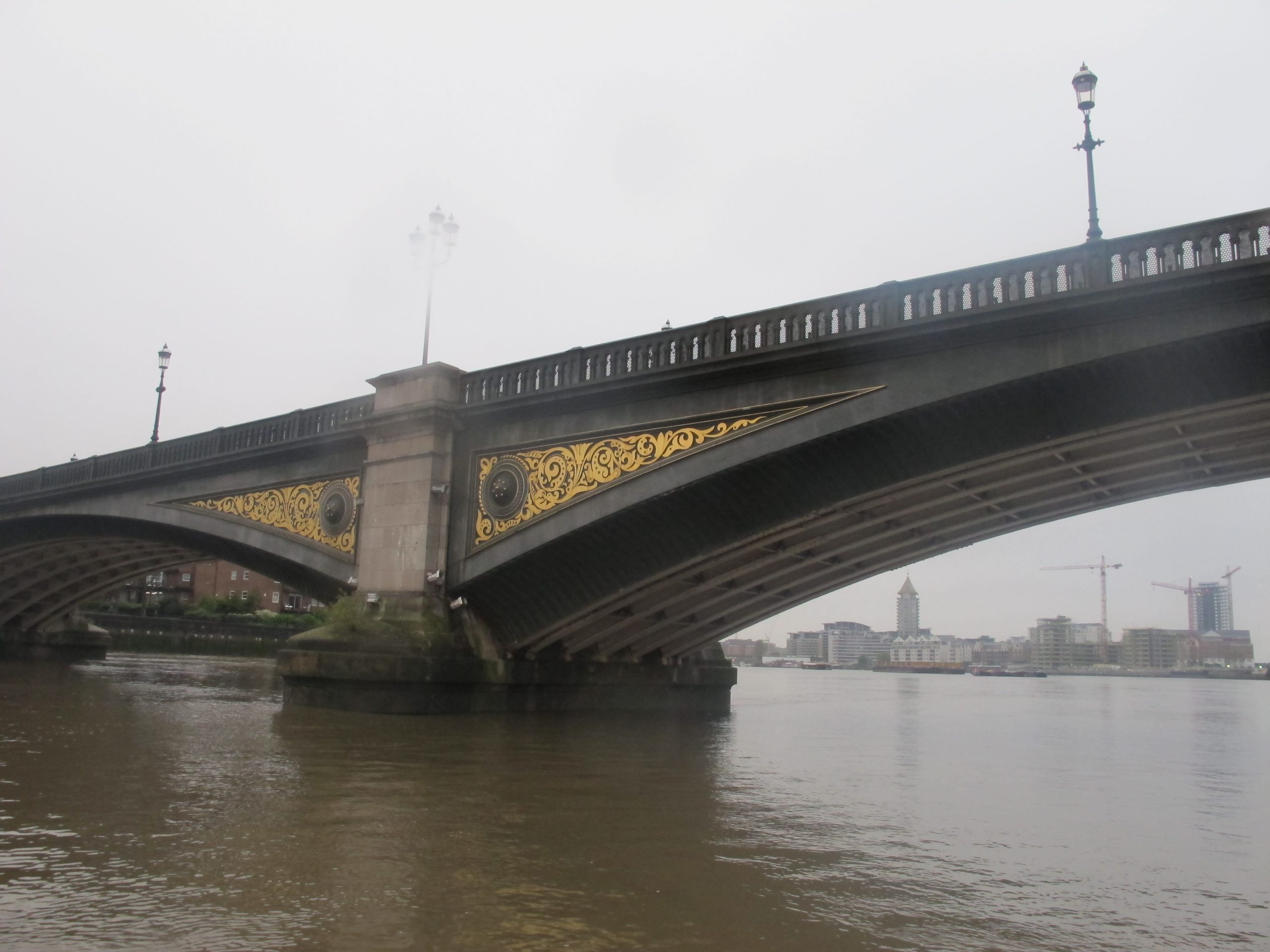 For all you Blue Peter fans here’s one we did earlier.

Me and Catriona in 2015. Cold and wet and happy. Tower bridge and a.n. other bridge. In the mist.

For 400 metres everything went swimmingly. It was rough sure, the UberBoats were whipping past and Protea was both pitching and rolling. But I was confident in her sea worthiness and my experience as a captain and then…suddenly… disaster struck. The tiller went completely loose in my hand and I had no control of the rudder which meant I had no control of the boat.

This meant we stopped heading up the Thames and started to swing round until we were across the river. That made it seem like we were being swept out to sea, which was even scarier. Though to be fair I was just panicking big time at this point. We don’t have VHF radio (no legal requirement as Protea is less than 45 foot long). I had my mob but not my glasses. And somehow I still felt that if I kept moving the tiller the rudder would suddenly magically respond.  Finally I remembered the anchor and yelled to the crew to throw it overboard. It didn’t seem to magically save the situation but at least by now the waves from the UberBoats were pushing us towards the bank (though down by Limehouse it’s a massive wall) and that seemed safer. Quite a crowd had gathered on the afore mentioned sea wall filming our plight. And one helpful jogger had rung the river police. As had the crew by then I think. (Stuck at the stern, hand on defunct tiller, engine still on – not sure why – dodgy hearing and all that meant I had little idea of what was happening at the pointy end of the boat.

And still no sign of imminent rescue. When, in the distance was the unmistakeable red/orange blur of a Thames rocket as it swept round the corner from Canary Wharf on the far side of the river. A ship a ship! We were saved. I started waving with the classic two handed “We are in a spot of bother and need some assistance!” type wave. Aka, “Help! Help!” They waved merrily back with one hand. WTF? There it was! My drowning not waving moment! I had always imagined I would would be swimming when it happened, but this was definitely the next best thing. Did they seriously think we were waving, not drowning, like Rock??  Had they never heard of Stevie Smith?? 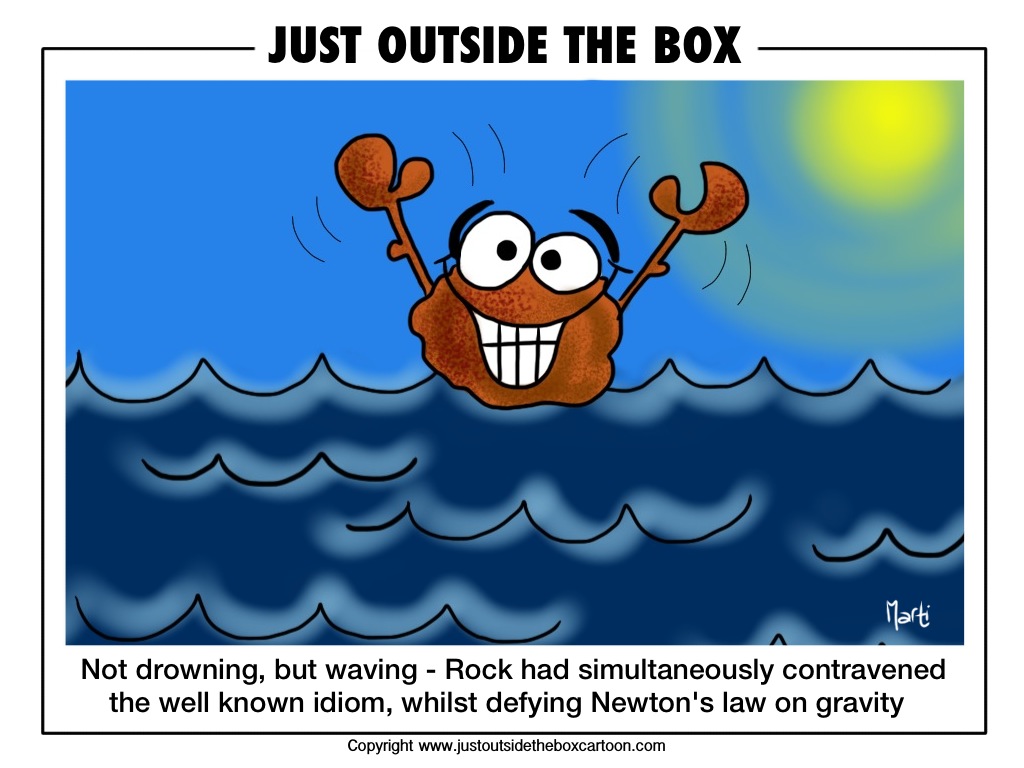 I started waving more manically and shouting “NO! DROWNING! NOT WAVING!” for good measure. Though truth be told it was actually “HELP! HELP”. As if they could hear me… But I have read many a tale of shipwrecks at sea where the lone seafarer sees a boat pass by or a plane fly overhead, are not noticed and it’s another 285 days before they are rescued by which time they have survived on the odd flying fish and drinking their own urine and I wasn’t keen to go down that path. Suddenly they realised our plight, veered off their course, sped straight towards us, and we were saved…

Of course it wasn’t quite a simple as that, involving as it did a wait for the River Police, difficulty in attaching a tow rope to Protea, our inability to raise the anchor (which had in fact done its job and stopped us drifting upstream, but I hadn’t realised) smashing us into the wall by Limehouse as they tried to turn us unsuccessfully into the entrance to the lock,  securing us to Limehouse Jetty Number 1, now shadowed by a hulking PLA boat who had dropped one of their crew members onto the jetty, before announcing that their job was done, we were now safe and they couldn’t tow us into the lock or even to Limehouse Jetty Number 2 because their boat was too tall to get under the road bridge. Eventually they agreed to stay until I managed to find the lock keeper to see if he would let us back in and someone to tow us into the lock, which took a while but was ultimately successful. And so, three to four hours after we set off, we were finally back in the basin, with a very seasick Suhith; an Erdem family – Julia, Mustafa, Sofia Dilara (16) and Leo Sinan (13) – with a shedload of photos and a tale to tell; and a captain who needed a cup of tea and a fag feeling a bit like Rabbit after he got lost in the mist… 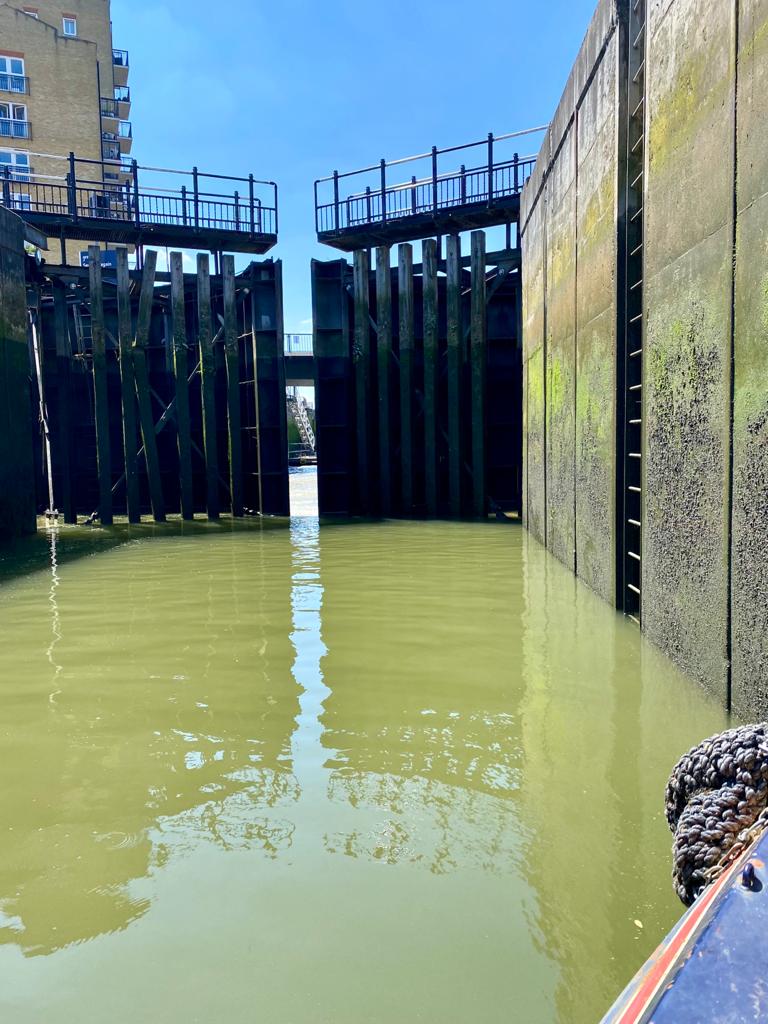 It’s always a thrill as you get a first glimpse of the Thames as the lock gates open and you are about to leave the safety of Limehouse Basin. 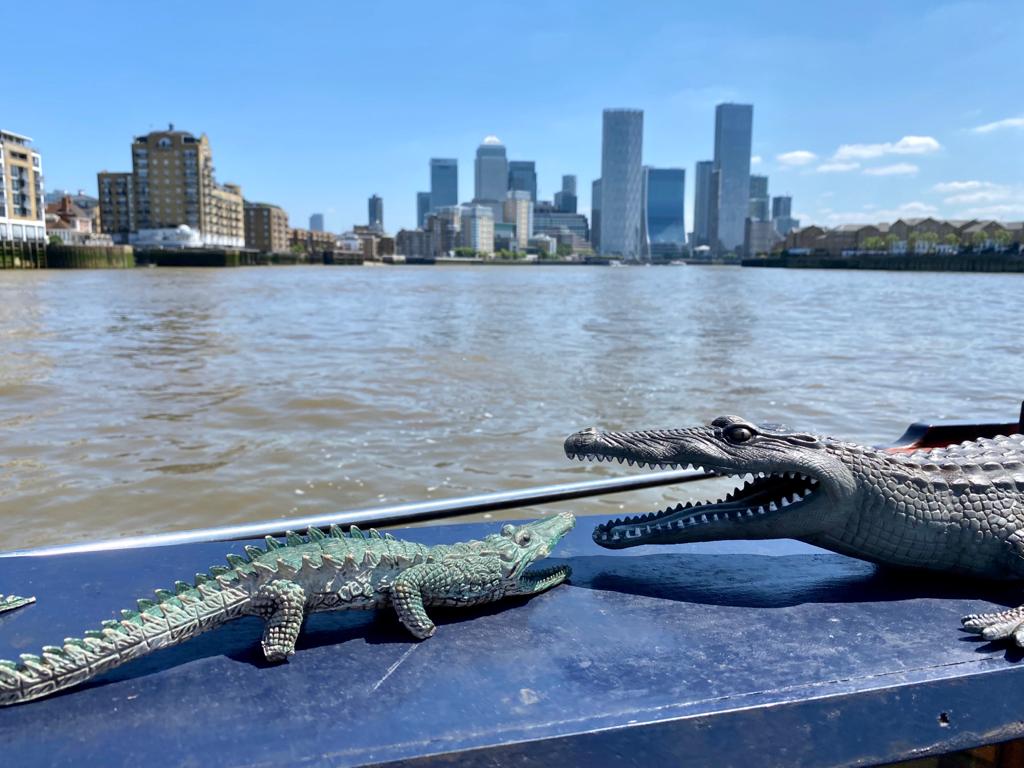 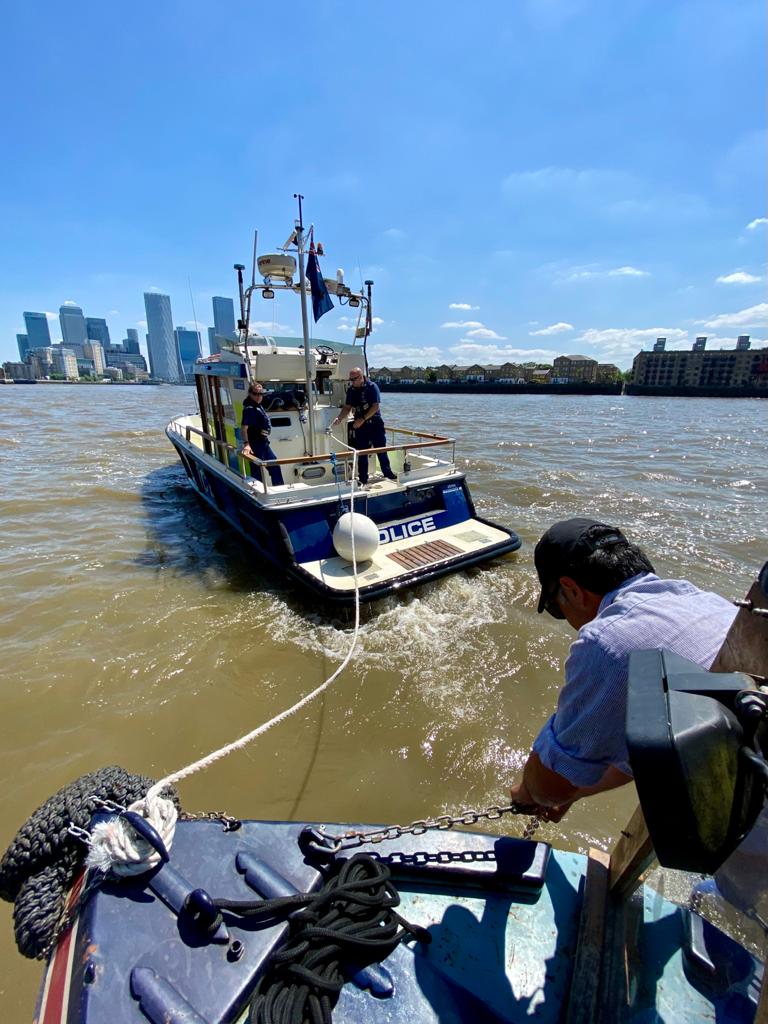 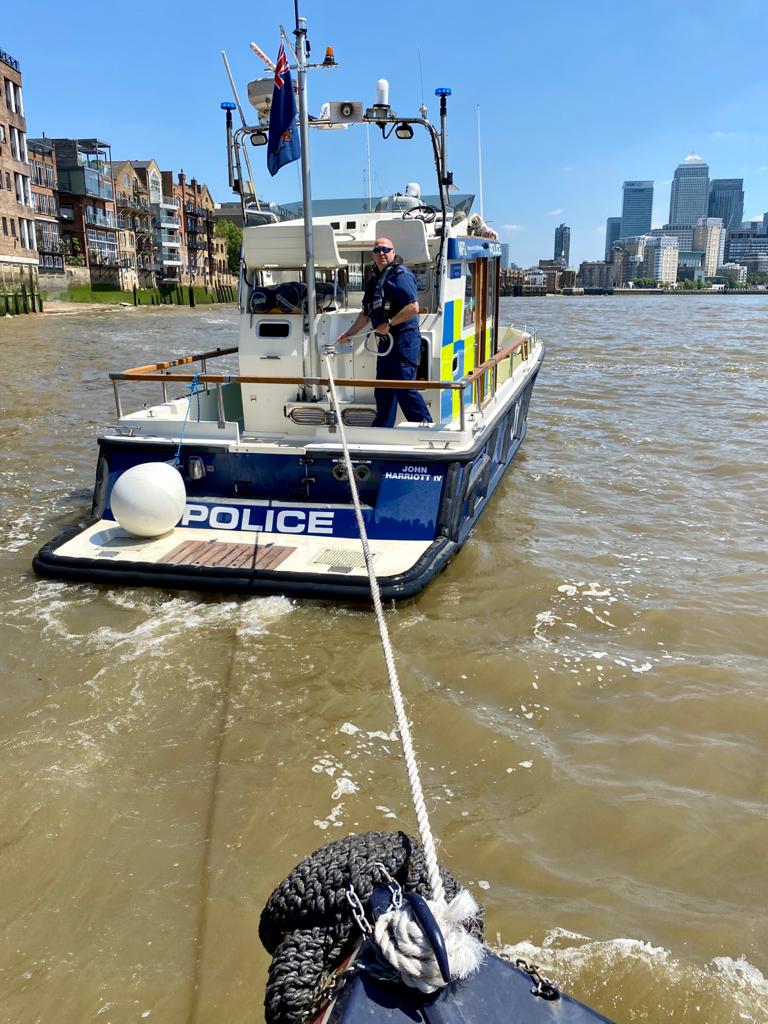 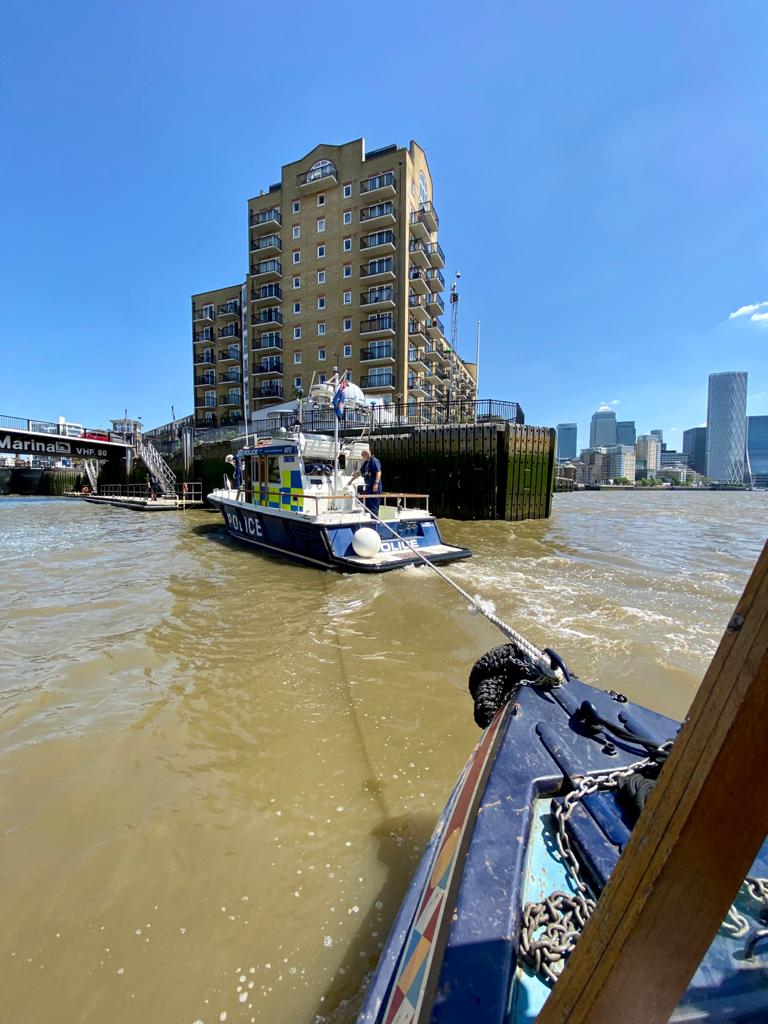 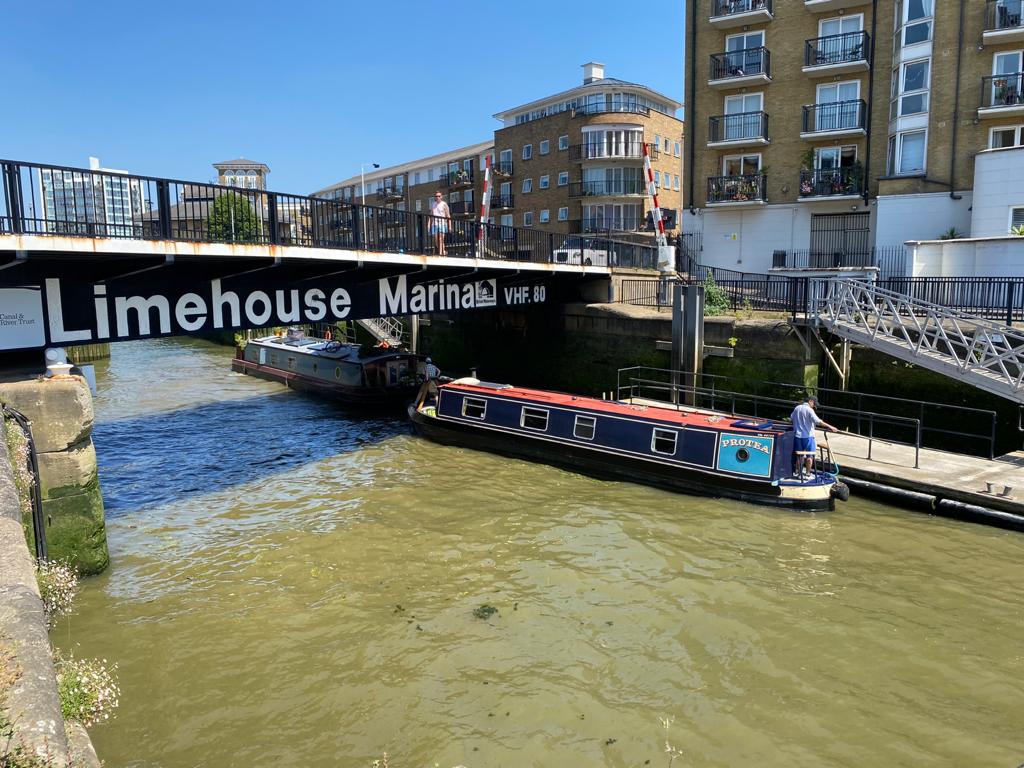 Left. Approaching Limehouse basin. Nearly safe. Just that tricky and massive sea wall to miss.  Right. Final stage of the rescue.   Mark and Thanh inch out of the lock to pull us back in.

Being Captain Cath is a stressful job at the best of times. But being captain in charge of a stricken ship when you have bugger all idea what to do to alleviate the situation is something else. I am taking solace in the fact that when I was sixteen I saved the whole family from drowning with my trusty inflatable dinghy. I may even blog about that one day, given that it also stars Eric (my dad, RIP).

Thanks to Martina Zeitler’s for the use of her fab Rock cartoon. http://justoutsidetheboxcartoon.com/

For those who don’t know the actual poem here it is:

Not waving but drowning by Stevie Smith

Nobody heard him, the dead man,

But still he lay moaning:

I was much further out than you thought

And not waving but drowning.

It must have been too cold for him his heart gave way,

Oh, no no no, it was too cold always

(Still the dead one lay moaning)

I was much too far out all my life

And not waving but drowning.

June 2021 – not waving but drowning, the real deal