If you listened to The Great Leaky Loo Scandal aired on Costing the Earth, Radio 4 (aired Sept 2020) you would be forgiven for thinking that if only flush valves were banned and the WC siphon (a flushing mechanism that uses air as the barrier and so is inherently far less prone to leaking/letting by) made a comeback, then water would no longer be wasted from the UK’s toilets. But the reality is more complicated.

A bit of history

In 2001 the Water Regulations in the UK were changed to allow dual flush toilets, flush valve mechanisms and an internal overflow discharging into the WC pan. At the same time the maximum flush volume was reduced from 7.5 litres to 6 litres per flush. There were different reasons for these changes. The first was to save water when flushing the WC, whether the WC was single flush or dual flush. Harmonisation with European Regulations and the re-emergence of dual flush WCs into the UK were others, as was the possibility to flush by pressing a button.

Overall the results have been positive. Less water is used to flush UK loos than previously. But there has been an issue with leakage from some of the flush valves. The high penetration of dual flush loos since then means that the average flush volume is now 4.5 litres per flush compared to 7 litres per flush before 2001. And the proportion of water used in a household to flush WCs has dropped from 30% to 20%, – due to less water being used to flush WCs but also due to an increase in showering times and shower flow rates.

Before the regulations were changed it was known that flush valves do eventually leak unless the washer is replaced. That fact led to a lot of discussion within the UK as to whether they should be allowed. When a WC siphon fails, it does so due to a damaged diaphragm. Water is wasted as the handle is ‘pumped’ to make the WC flush, but the amount is small and it is exceedingly rare for a WC siphon to continually flush. The opposite is true of a failure to the WC flush valve, which once it starts to leak gets increasingly worse over time. The argument at the time was that leaking flush valves would be repaired before the leak got too severe, but that doesn’t appear to have been borne out by the evidence.

Research by Thames Water has concluded that an estimated 5% of UK valve toilets leak with the average amount of leakage 400 litres per day – the equivalent of a flow rate of 0.28 litres of water a minute running down the inside of the rear of the WC bowl. This works out at 20 litres per day for every WC in the UK, which begins to severely cut into the savings from dual flush WCs. There are two main parts that can fail in a toilet cistern (or work sub-optimally). They are the flushing mechanism and the refill mechanism. Because of the internal overflow design, leakages from either a faulty flushing valve or a faulty inlet valve, both manifest visually as a leaky loo. Thames Water’s research has shown a 50-50 split between flush valve and filling valve failures, a fact that was not mentioned in the programme. 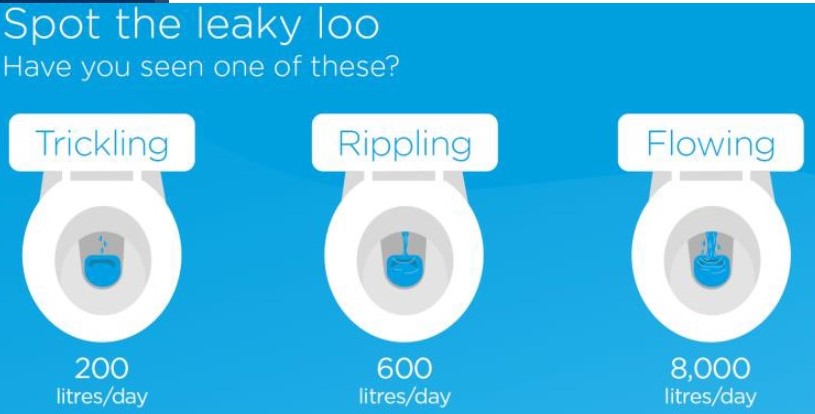 A bit more about internal overflows

Before the change in 2001 overflows had to be visible and cause a nuisance. The default position to meet this requirement was to terminate externally to the building. One of the main problems with the new overflow arrangement is that it doesn’t cause a nuisance.  Being visible depends on the amount of leakage that is occurring – a ‘trickling’ leak can be quite easily missed. Internal overflows made the siting of WCs easier and no external overflow means no requirement for a hole through the building fabric. But it has created this other problem when it is either not noticed and when it is visible is not causing a nuisance and so is allowed to continue.

Failures are being recorded on most brands of flush valves but some are failing more than others. The main issue is failure of the washer material (which is rubber or silicone), and so far more issues have been discovered with rubber washers cracking and shrinking rather than with silicone washers. Leaky loo part failures are happening in hard and soft water areas. There is no evidence of WC cleaning products or installation error causing the failure and the best performing flush valve only has a small market share in the UK. Thames Water are testing more robust valves from Denmark and Australia and monitoring the effect of thicker washers.  Under BS997 flush valves are tested to 200,000 flush cycles. In the average home it would take 43 years for that many flushes to occur (average family 2.6 occupancy, 5 flushes/person/day) and so real world conditions and usage aren’t adequately replicated. Thames Water has found flush valves that have failed after just two years. (The corresponding figure for the inlet valve is five years.)

29% of business properties visited had a leaky loo. On sites that have a leaky loo, there is an average of 2.2 leaky loo fixes per site. Out of 58,551 toilets inspected, 4,854 were leaking (8.3%). This includes dual flush, siphon mechanisms and inlet valves. The average water loss was 2,100 litres per day. WCs with 8,000 litre fixes (a flow rate of 5.5 litres/minute – think a washbasin tap running at full rate – were the most common (943 in total). 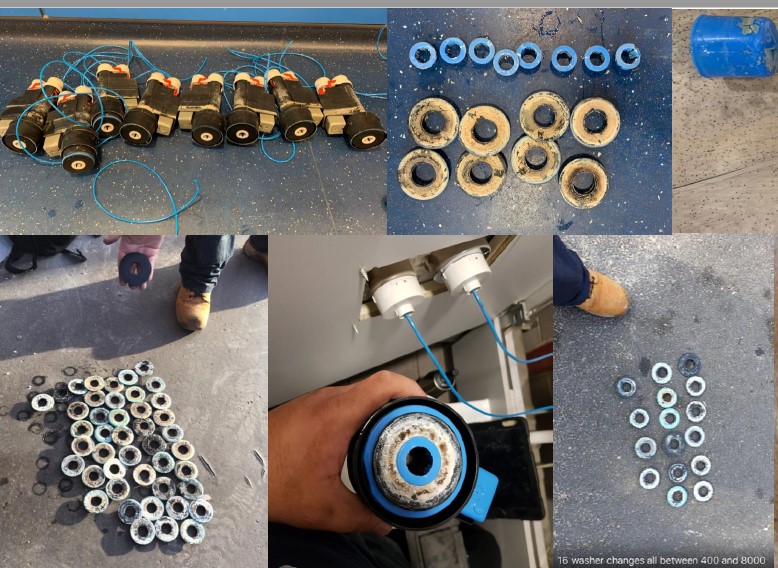 The best solution would be a dual flush WC siphon that can be operated by a button. One has been in pre-production for a while now but still hasn’t hit the UK market. It takes a lot of investment to bring a new product to market and if there is no certainty of sales there is only so much money that can be invested into the process. Dual flush loos with a WC siphon require more user interaction. The handle needs to be held down for a full flush. In the absence of instructions the handle is usually pressed and then let go which activates the small flush, leading to an inefficient flush if poo needs to be cleared from the pan. Flushes controlled by a button were designed to overcome this.

I have seen lots of leaky loos over the years. But in most cases the ones I have seen are a failure of the float operated valve. Either the washer in the valve has become worn and drips continuously so that eventually the cistern will overfill and the excess water drips down the overflow pipe into the back of the WC pan. Or, in worst case scenarios, the inlet valve has been incorrectly adjusted or shifted its position and so does not cut off the incoming flow of water, leading to extremely high leakage rates. Neither of these were covered in the programme. I have also seen flush valves not set up properly so that when you press long flush only the short flush happens and vice versa and dual flush valve toilets where the short flush doesn’t work at all, again not mentioned. To be fair these latter two are not examples of leaky loos but are a failure of flush valves.

It’s clear that failing WCs (whether due to the flush valve or the inlet valve) need to be fixed. It is good to see that the publicity generated by the programme has been accompanied with most water companies offering to fix leaky loos for free. It will be a failure if only WC flush valves are seen as the issue.

Thanks to Andrew Tucker from Thames Water for the data on amount of water wasted from leaky loos.

Waterwise have produced a handy guide when buying or specifying dual flush toilets.