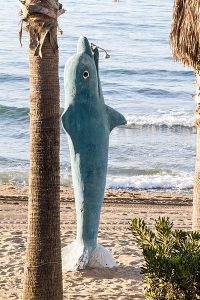 This is my 92nd shower blog! Can’t quite believe I have got this far without blogging about beach showers. ‘Why ever not?’ I mused. But having spent the last 1.5 hours googling pictures and info and getting hardly anywhere, I think I understand why…

As I began my research I was convinced there would be a history of beach showers that I could tap into with iconic architectural examples. Well not on page 1 of Google however I worded it! And of course I kept running into the fact that any half decent photo is copyrighted. Which I kind of get but frustrating none the less. So thank goodness for Tim Ove from Norway for his fab photo of this shower in Marbella, available on Wikimedia Commons.

But I still didn’t have much of a blog. So decided to ask the family on our WhatsApp group currently the depository of Covid 19 videos – some funny, some political, some completely mawkish.

And what do you know? They came up trumps! Ironically by that time I had discovered some shower facts that I had never thought of and which, frankly, my life was not the poorer for not having known them. Seemed a shame to waste all that endeavour but what to do? Ah, of course, shoehorn them across to June’s blog… So that’s where they currently reside – I bet you all can’t wait!

Anyway, back to beach showers… 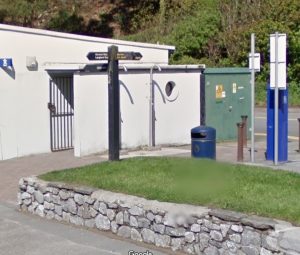 Surely I have had a beach shower as the sun sets over a glorious vista of sea and sand and that same sand squeaks beneath my feet at some point in my life. But none sprung to mind. In fact the only beach shower I can properly recollect are these at Caswell Bay on the Gower peninsula in Wales. It’s a brilliant place for surfing, swimming, picnics and beach game, has a great beach café and fab company – Rossi, Karen and Ollie, Suhith and Sam. But the showers? In the middle of the road by the public toilets next to a bin! At least I am not sad enough to have taken a photo of said showers on one of my many trips to that beach. This one is courtesy of Google maps, screen snip and the little floating orange person.

Meanwhile, while I waited for the family to ride to the rescue I found a few more interesting facts about beach showers… 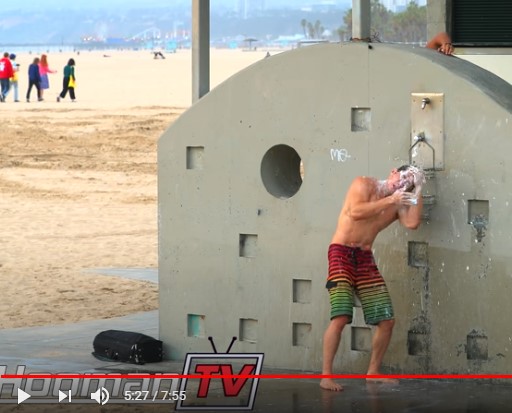 In 2019 Argelès-sur-Mer, on the Mediterranean near Perpignan in France replaced 10 beach showers with taps and saved an estimated 8 million litres of drinking water.

In 2015 The California Department of Parks and Recreation shut down ‘outdoor rinse stations’ as a water conservation measure on the beaches under their jurisdiction in Orange County and estimated it would save more than 1.2 gallons (5.5 litres) of water per shower, potentially saving more than 18 million gallons (81 million litres) of water each year. Of course, it might have been that the department saved water (and money) but that people just went home and showered to get rid of the saltwater, so overall no water was saved. Nonetheless other beaches in California did the same thing in 2016.

Beach showers are “an important amenity for people who want to get the sand off their feet before they get in the car.” But what about using them for cleaning? In 2016 Magaluf in Majorca introduced a 100€ fine for anyone caught using soap or “other personal hygiene items” in that city’s beach showers.

So no shampoo prank showers form Magaluf. This one was filmed at the very utilitarian concrete showers at the junction of beach and road in LA.

The famalam and beach showers

Luckily as mentioned before, some of my erstwhile family came up trumps. 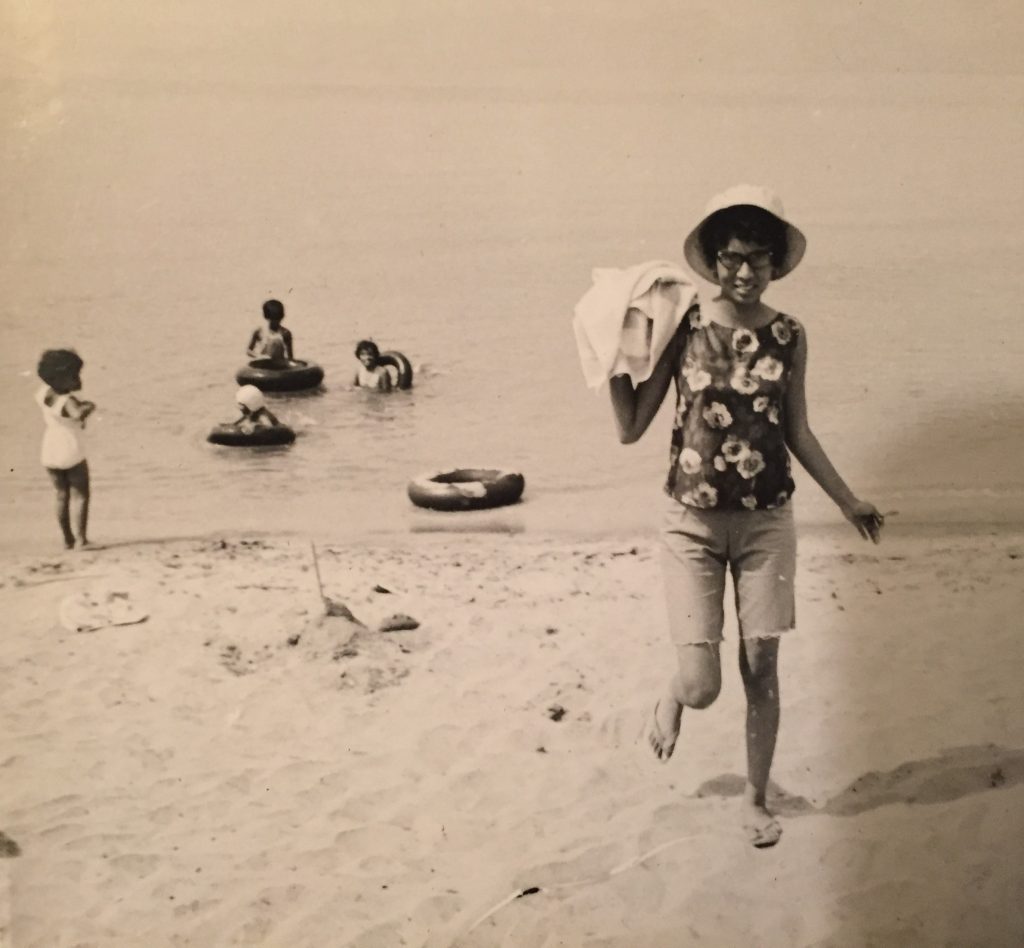 First of all Suhith (partner) with her remembrance of lazy afternoons in the 1960’s at Lake Malawi and the beach showers they had there. No photo of the showers themselves but here she is on her way up to them, a pile of cousins in the background. 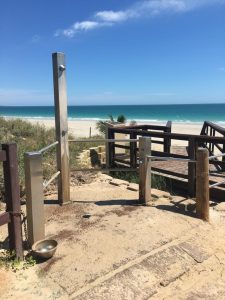 I asked Chris (brother) if he could pop across to Cable Beach in Broome to take me a photo of the beach showers there despite the fact that the whole of Australia is in lockdown. ‘Sure,’ he said and sent me this fab view with a deserted locked down beach behind. ‘Brilliant’’ I replied ‘thanks for risking biscuiting it’. Only then it transpired it wasn’t him at all but his partner. So big respect and thanks to you Kerry. (Obvs can’t risk putting your whole name in case it doesn’t meet the definition of a strictly essential trip.)

And finally Jenny sis, in her own words with a tale of extreme cycling and beach showers…

I was cycling with my then partner, from the UK to Australia. The plan was to do it in 2 years but after 18 months we were only in Sudan. I had contracted malaria and amoebic dysentery, and had cycled 8,500 miles (bar one lift on a lorry) through 26 countries. I decided to call it a day. But the beach showers were months before this, on the coast of Southern Turkey.

It was July 1983, and it was hot. Even the locals were exclaiming that it was ‘cok sicak’ (very hot). After 11 months in the saddle we were in Turkey, the cradle of great civilisations and the gateway between Europe and Asia. I was beginning to flag. Cycling in extreme heat on the mountainous coastline on sometimes unmade roads with fully loaded bikes was not my idea of fun. 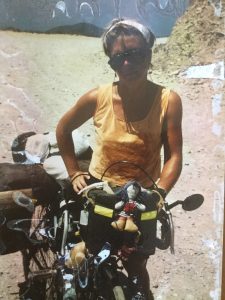 We rough camped as often as possible as we were on a strict budget, so washing was a rare treat; I would have what passed for a wash in our tiny tent in the mornings, using our largest cooking pot.

As the weather was so incredibly hot and humid a shower would be a true luxury.

And then, there they were, a cluster of them on a fairly quiet beach – a veritable oasis in the desert! We pushed our bikes through the sand and prepared to indulge in a few moments of heaven. Of course, life is never quite as straightforward as it might be; although the beach was quiet, the showers were busy, and of course, these being beach showers, were fairly open – cement cubicles with no doors. And of course, this being Asia, all the users were men. Unperturbed – – I went in, sharing a shower with Mark, his wider body providing cover for my narrower one. I was young and reckless; I was bold – too bold when I think back – but I was very very hot and sticky and not about to give up on such an enticing opportunity – to be clean!! The disapproval was palpable rippling through the shower cubicles as the news spread. Some men shouted – abuse probably, but one younger man, probably our own age, chose to be our protector. I was so grateful for this particular guy, who was clearly keeping us safe. We washed and dried as quickly as possible, thanked him and went on our way – clean at last!

I certainly wouldn’t do that now. It would feel too disrespectful, and too risky. But as I said, I was young, reckless, not a little rebellious ….and very, very sweaty.