“No more platform No 2s” was a headline in the Guardian back in October 2017 referring to the fact that in 2019 the practice of trains discharging the contents of their toilets directly onto the tracks would stop.[1]  A combination of new trains and retrofitting old stock with holding-tank toilets would end the unsightly view of poo on the tracks and render the instruction not to use the toilet in stations obsolete. And where exactly did this story come from? India perhaps where over 1 billion people are forced to participate in open defecation in the absence of safe sanitation? Or one of the many other countries in the world where not everyone has a toilet? The answer is neither. But if I said that in the 21st century, this is happening on UK train tracks, in the 5th richest country in the world,[2] I would hope you would be appalled.

I didn’t have time to blog about it then and thought I had missed the boat (train would be more apposite). But then 2019 came and went and the practice is still continuing. Incredibly the new date has been pushed back to 2023 after East Midlands Railway was given permission to continue dumping sewage on the track from fast trains running between London St Pancras to Nottingham and Sheffield.[3]  Not surprisingly, other train companies have latched onto that as the new date for compliance. 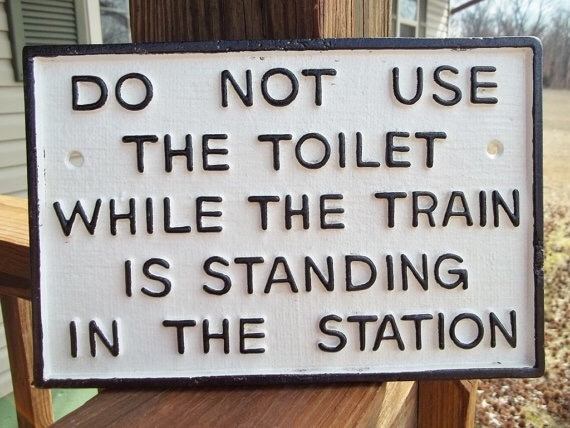 In UK trains built before 1980, ‘direct discharge technology’ was used for the toilets – basically they emptied straight onto the track, with the aid of water flushed from a tank. That changed in 1981 when the first train carriages with retention tanks were supplied. Yet it wasn’t until 1996 that all new rolling stock was fitted with tanks for effluent retention. And in 2018 10% of Britain’s train carriages were still disposing toilet waste straight onto the railway tracks.

So why do we still let this happen? As well as being unsightly it is a health hazard for train track workforce. At low train speeds or when the train isn’t moving, the contents of the toilets are deposited straight onto the track. At higher speeds, the faecal matter is broken up and a thin film of poo is spread out from the side of the carriage.  Despite this, in 2015, the Rail Safety and Standards Board (RSSB) concluded, that while discharge from toilet waste on to the track is unsightly, the risk to passengers and employees from pathogen infection is low.[4]  However, tests where buckets of whitewash are flushed down train toilets at 125mph demonstrate that faecal matter gets splattered everywhere, including onto train door handles, so it’s not that safe for passengers and in 2015 the BBC found that tracks at King’s Cross, Liverpool Street and Paddington all had raw sewage on them.[5]  Meanwhile away from the stations, raw sewage often falls onto signal crossings and points, areas where train workers carry out regular maintenance. 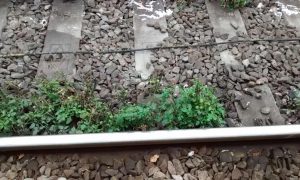 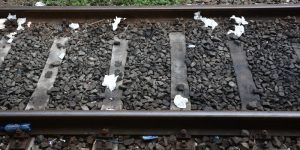 Why not just use holding tanks?

Holding tanks do what they say on the tin. The flushed contents of the toilets are held in tanks under the carriages and emptied at train depots. Smaller tanks rely on frequent (usually daily) emptying whilst providing larger holding tanks increases vehicle weight. Underestimating tank capacity requirements leads to problems in service as smaller retention tanks need to be regularly emptied, often at a terminal station. But if the turnaround is shortened for any reason the tanks may not get emptied, the toilets back up, and cannot be used.

There are many and varied reasons that train companies cite for the difficulty of holding tanks. For example, in 2007, First Great Western it announced it was extending the life of its rolling stock for another 10 years and that fitting toilet retention tanks to the existing rolling stock would increase train weight and ‘require major structural modifications that cannot be justified as part of the life extension’. It is correct that sufficient space is required between the axles to fit holding tanks, and that space needs to be structurally suitable. Often this is not directly under the toilet so pipework has to be routed from the toilet to the tank. To reduce the size of the holding tanks the toilet system can be changed to a vacuum system, which means a smaller tank but more work in the vehicle.[6]

Another option is for bioreactor toilets that clean the discharge from the toilets using anaerobic liquid treatments to treat and sterilise the liquid content before discharging and retaining the solids. Bioreactor systems have much larger storage capacities and can go for weeks without being emptied, as opposed to daily.[7] But there have been numerous problems with these types of toilets in India.

Some ScotRail rolling stock control where effluent is discharged using GPS technology. The software is programmed to prevent discharges within station areas and areas where railway workers are more likely to be carrying out “hands on” activities such as switches and crossings work, but will allow discharges where worker activity is often limited to walking (i.e. plain line). It is a control measure which, whilst not ideal, does help to reduce risk and could be more widely while the industry gets up to speed on halting this practice altogether.

Since 1993, the Indian Railways have been experimenting with a host of technologies to replace the open discharge system. The list includes vacuum toilets; controlled-discharge toilet systems (CDTS) which allow waste to be dropped only after a train acquires a speed of 30 kmph, thus keeping stations clean; and zero-discharge or bio-digester toilets.

Over 100,000 “bio-digesters” have been installed in mainline express and mail trains by the Indian Railways. They are small-scale sewage-treatment systems housed beneath the toilet. Bacteria in the chamber digest human excreta, leaving behind water and methane. The water, after it has been disinfected, is let out on the tracks. 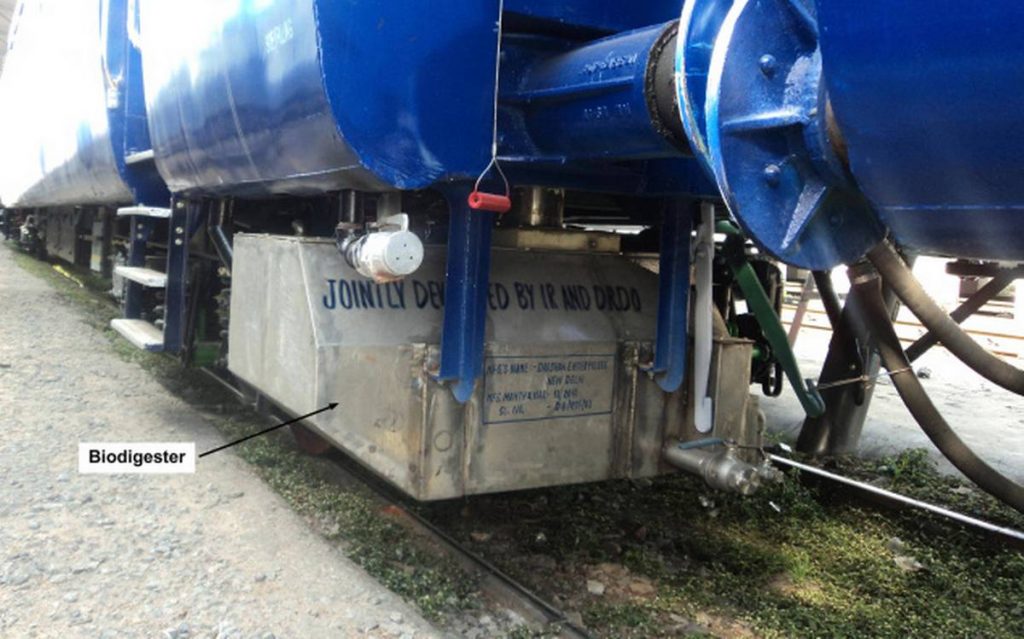 Or that is how they are supposed to work. However, sanitation experts have pointed out that most (95% according to some sources) of the new “bio-toilets” on Indian trains are ineffective or ill maintained, are no better than septic tanks and the water discharged is akin to raw sewage. Some of the issues reported are: an overpowering stench due to improper functioning of mechanical parts; toilets getting jammed from being used as a bin or being blocked by soiled sanitary napkins; non-functional mechanical fixtures such as valves; inadequate water pressure and enough water available for flushing (bio-digesters need five litres of water per flush); faulty mounting and securing apparatus on the toilet tanks leading to regular breakage.

Having spent nearly Rs 13.7 billion (£150 million) on 136,985 railway bio-toilets the railway ministry is now considering “upgraded” vacuum bio-toilets at a cost of Rs 62.5 billion (£670 million).[10] These hybrid toilets will work by fitting vacuum toilets atop the bio-digesters already installed and just one big bio-digester installed in the guard’s cabin at the end of the train.

As this blog shows it is important not to underestimate the issues, and costs involved to upgrade toilets in trains. And it is also the 21st century. The UK should be embarrassed that until 2023 we will still be dumping raw sewage on train tracks and seeing the image below if we travel by train. 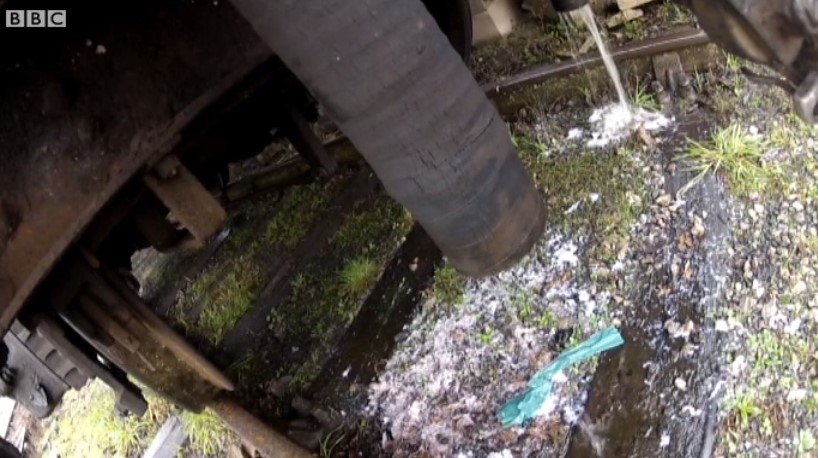 [4] This research has been criticised in some quarters as not being robust enough because of where on the tracks measurements were made of the risks.

[7] Emptying can be carried out at ten week intervals according to the suppliers, Airquick

[10] [10] From an article by Srinand Jha on IndiaSpend, Read the original article.

Do not use the toilet while the train is standing in the station – Cath Hassell, India and UK