A few UK shower facts. (From At Home with Water from the Energy Savings Trust)

And another couple of shower facts

So, which theory of behaviour change science should we use to influence adolescents to get out of the shower more quickly? Nudge theory is so popular in the UK there is even a Government Department dedicated to it. This theory argues that positive reinforcement and indirect suggestions can influence the motives, incentives and decision making of groups and individuals, at least as effectively, if not more so, than direct instruction, legislation, or enforcement. Shower timers are supposed to be a good example of nudge theory.

Social norm theory uses the effect of peer pressure to influence desired behaviour. It needs over 50% of the group to carry out the behaviour, and ideally two thirds or more. Apparently the behaviour doesn’t have to be real as long as it is perceived to be real. So a statement like ‘65% of adolescents shower for five minutes or less’ is considered to be an effective social norm message.

Other behaviour change scientists would suggest that for effective behaviour change you need to strike a chord on an emotional level. Whatever that emotion is. The Don’t Mess with Texas campaign aimed at 18 to 35 year-old males (the group statistically shown to be the most likely to litter) which reduced litter on Texas highways by over 70% between 1986 and 1990. Or look up Rip the Drip the antihero super nerd who thinks wasting water is cool leading to the conclusion ‘Don’t be weird, be normal.’

Having seen the sheer astonishment etched across the faces of adolescents when even one person in a class of 30 puts their hand up to indicate that they spend five minutes in the shower, I am pretty confident that a social norm message such as ‘65% of adolescents spend five minutes or less in the shower’ will be met with a massive ‘OMG… LOSERS!’ In my opinion, social norms don’t work with adolescents and showering so we have to try something else.

Nudge theory just seems a bit wishy washy in an attempt to shift adolescents out of their ‘yeah whatever’ default mode. So we use gudge theory – nudge theory with a dollop of added guilt. And in a blatant (but acknowledged) rip off from the people who designed the Amphiro shower, link shower use directly to the plight of the polar bears. We also up the ante by using pictures of cute polar bears in varying stages of distress. 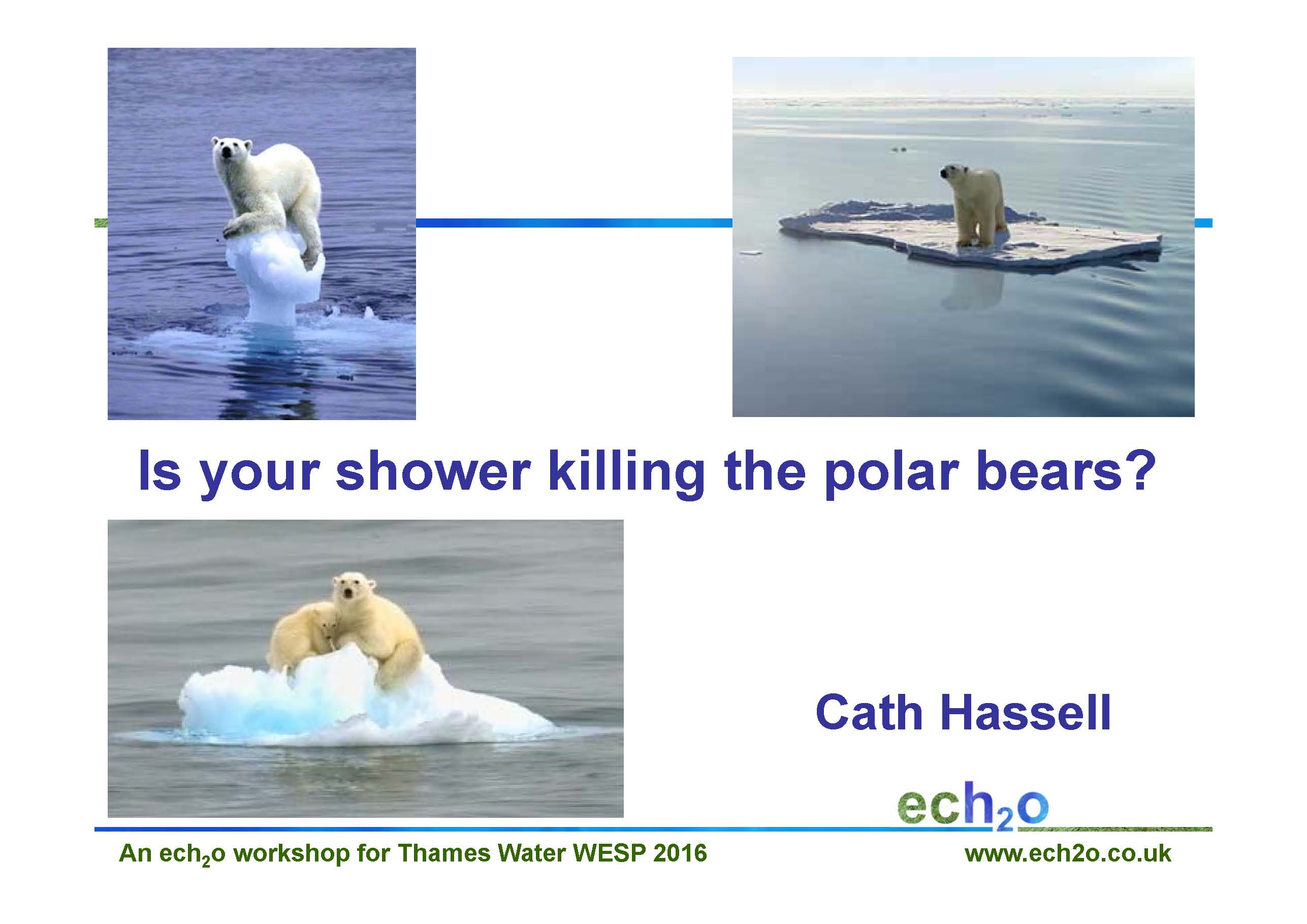 There is a school of thought in the UK that behaviour change is only effective if there is no blame attached. Therefore when using gudge theory I tread that thin line between ‘Heating the water for your shower emits CO2 emissions, which is causing climate change which is leading to the melting of the polar ice sheets, which in the Arctic means polar bears are getting stranded when chunks of ice break off and if you had any kind of soul you would get out of your shower sooner’ and ‘Hey, the polar bears might be in all sorts of trouble but they still look unbearably cute so whilst it would be great if you could cut down on your inordinately long showers, don’t worry if you can’t cos we can just carry on getting loads more photos like this.’ 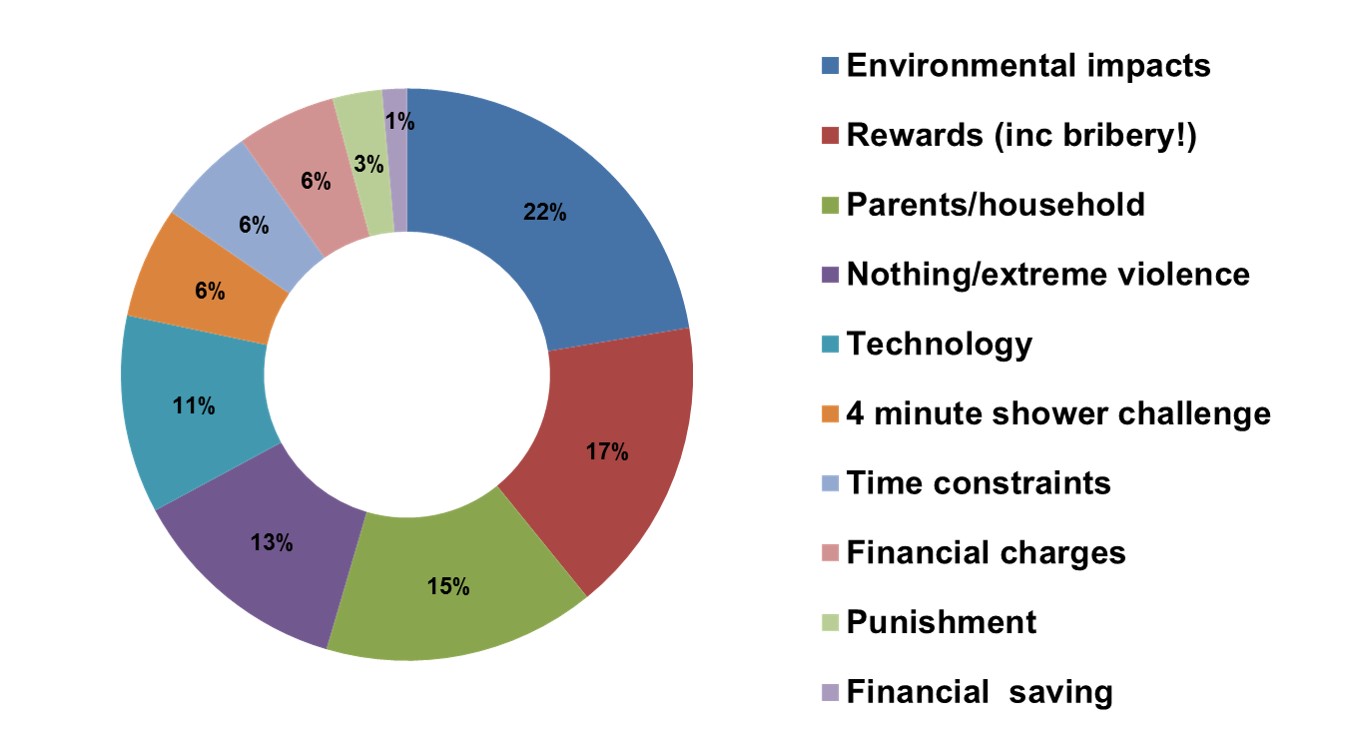 But joking aside, how successful is our gudge thoery? We asked 120 sixteen year olds a series of shower questions and analysed the reponses. 66% of them showered every day with a further 16% showering more than once a day, (most of the latter group showering twice every day.) Just six pupils spent five minutes or less in the shower, 58% spent over ten minutes in the shower, and the average shower time was 17 minutes (over twice the UK average and more than four times above the target four minutes). 61% of this adolescent focus group categorically stated they would not be able to meet the four minute shower challenge.

Then we gudged them with the plight of the polar bears and put them into mixed groups of long and short (relative adolescent type short) showerers and asked them what would incentivise or influence them to get out of the shower quicker.

The answers were many and varied, but we are pleased to announce that environmental reasons (i.e. the polar bears ) came equal top along with rewards (both coming in at 17%) with 16% voting for technology that forced people out of the shower after four minutes. Rewards could be from water companies or parents, as long as there was a reward. The technological solutions were mostly a shower that cut off or ran cold after four minutes. The four minute shower timer didn’t come anywhere. But it was a free bit of kit so they all took one anyway…

Gudge theory – the new tool to get adolescents to shower shorter?