So it was Christmas and Andy Goodson said I was one of his favourite people even though he didn’t know me that well. And that maybe that was because we had known each other in a past life. I guess any normal person would have replied, ‘Oh that’s nice cos you’re one of my favourite people too.’ And we could have both moved forward as though nothing had ever happened. But, being somewhat socially inept, I just stared in confusion and came up with, ‘Oh that’s nice I’ll put you into my next shower blog.’ which , in Cath world, is just about the highest compliment I can pay anyone.

I can’t tell if that’s a normal response or not, but possibly not in which case … Hmm, awkward… !!

So, to break the ice a bit, I told him about how I had erroneously talked about showers being invented for soldiers in the First World War, only it was actually the Napoleonic Wars. And that maybe we had met in a past life when we both been soldiers in the Russian Army. That meant we had to do a bit of Russian dancing in the kitchen and some of that jumping in the air and banging chests as presumably the super macho Russian soldiers would have done back then. Quite why might be lost on you, dear reader, but we enjoyed ourselves.

No ‘alternative facts’ in this blog

So, just to put the record straight, showers were not invented for solders to use in WW1 (1914-1918) nor the Napoleonic Wars (1799-1815). As we learnt in a history of showers by a. n. other the ancient Greeks had showers that closely resembled those of today. And, by 1822 showers were becoming recognisable as the showers we know today but still had to be manually filled, so definitely weren’t being used in the Napoleonic Wars as a quick way to get large numbers of soldiers clean.

It was the advent of indoor plumbing pipework that really began to move the shower industry forward as free standing showers could be connected to a running water source. That was combined with the fact that sanitarians began to be interested in the perceived health benefits of showering plus the fact that they were more hygienic and better at washing masses of bodies at the same time than baths.

Modern showers were installed in the barracks of the French army in the 1870s, under the guidance of François Delabost, a French doctor and inventor who had previously replaced individual baths with mandatory communal showers for use by prisoners in Rouen jail, arguing that they were more economical and hygienic. (Wikipedia) This system of communal showers was adopted by other armies, the first being that of Prussia in 1879, (which isn’t a Russian army at all, but was this the snippet of information I had heard and ran with?) and by prisons in other jurisdictions. 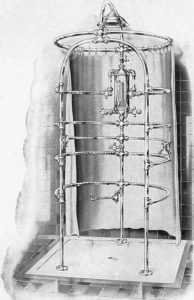 The needle shower (found mainly in wealthy public bathing areas such as gentlemen’s sports clubs in the 1880’s in the UK) was considered to provide many health benefits over and above cleanliness with jets of water being aimed at different areas of the body to give an invigorating and massaging effect.

Whereas, in other countries showers were seen as important for working people. In 1883 the Volksbad showering pavilions were introduced at the Berlin Hygiene exhibition and wildly deployed in German and American schools and factories in subsequent years. (From Bathroom by Barbara Penner). Communal showers were then installed in public bathhouses. The first shower in a public bathhouse was in 1887 in Vienna, Austria. In France, public bathhouses and showers were established by Charles Cazalet, firstly in Bordeaux in 1893 and then in Paris in 1899. (Wikipedia) 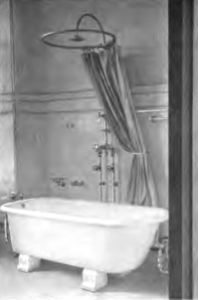 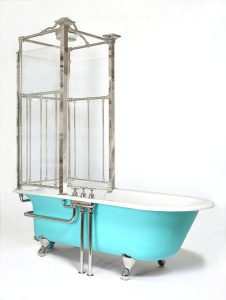 At the same time as this rush of showers in the public sphere, they began to be installed in upper and middle class homes in the UK.  (See above left to right, shower over bath 1910, centre a shower from the 1880’s, and right a copy of an Edwardian (1901 – 1910) shower bath.) Their popularity grew and grew without the designs necessarily changing that much. Shower valves became thermostatic to prevent scalding and electric showers appeared in the UK in the early 1970’s and are blogged about here.

Now 86% of UK homes have at least one shower – no wonder this blog is so popular!