Thank goodness for WWW land! When your back is against the wall because you have been overly concentrating on making sure you don’t bomb at you first ever stand-up gig, and suddenly there is less than one week left of the month and you haven’t even started the shower blog, there is always someone else who has written something that you can use for research into your next blog, or just copy it right out in an act of bare faced plagiarism. Which, dear readers, in my abject state I almost shrunk to.

But on the plus side I found I’m quite good at stand–up, in a beginner’s kind of a way. You would have expected me to throw in a couple of shower gags into the set but strangely I didn’t. I tried one shower anecdote out in a workshop and been told by another wannabe comedian they thought it was ‘going somewhere else…’ Not quite sure what they meant by that but it didn’t sound good!

So, back to my abject state…I almost decided just to reprint Plumbworld’s a history of the shower given that it’s pretty comprehensive and has some nice references to sabre tooth tigers in it. To make it clear which bits I had nicked, they were going to be in Leicester City blue in recognition of how we nicked the Premier League last season in the greatest football tale every told… But in the end I couldn’t stoop so low, so used info from loads of different sites and the colour coding idea was consigned to the bin. I did find a really cool infographic on the same subject with (as is the way of infographics the world over) has some cool pictures and succinct text.

So, in a nutshell, this is how the history of showering goes from the dawn of time up to about the middle of the 1800’s when modern sanitation ideas and the advent of indoor plumbing systems meant that free-standing showers could be connected to a running water source and they began to resemble the showers we use today.

I have decided to ignore showering under waterfalls or in the rain and will therefore jump straight to the first planned and (usually) indoor showers. Anyway I have blogged about how we got the boy Jon clean one time in the rain many years ago when he actually was a boy. That (the blog, not the shower) was back in November 2013 when it was a small part of a wider blog on fabulous showers. For those who have an injured linking finger it goes like this:

Jonathan’s (nephew) most fabulous shower (though to be fair, picked by me, not him) was indeed in the rain, when he was ten. Unfortunately not tropical rain, nor in a rainforest, but on the back deck of Dianthus (another canal boat) just south of Birmingham. It worked really well, in that he lathered up well, the rain washed it off, and because it was raining so hard there were no passers-by to report us for child cruelty. At that time I think we hadn’t found the shower in Dianthus and I probably paid him double his usual pocket money, so a result all round. 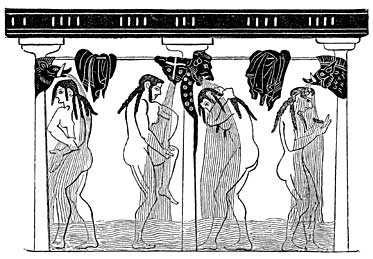 There is evidence to suggest that the Egyptian and Mesopotamian civilisations had rudimentary indoor shower rooms where servants would pour pots or jugs of water over their owner’s heads. The rooms had basic drainage systems and water was carried into the room rather than pumped. Ancient Greeks pumped water into and out of communal shower rooms and water spouts on fountains were used as outdoor showers.

Although the Romans had advanced sewer systems and built an enormous amount of bathhouses across their vast empire, I couldn’t find anything about showering (as opposed to bathing) during Roman times

The Advent of the Modern Shower

After the collapse of the Greek and Roman empires there doesn’t seem to be much reference to showers until 1767! And this shower reference seems a bit of a mystery. In that lots of sites say that: ‘William Feetham, a stove maker from Ludgate Hill in London, was granted the first patent for a shower in 1767.’ But hard as I searched I couldn’t find any proof of that particular patent. Though I did find an actual patent in his name from 1822, which is 55 years later! So… either he was very young with his first patent or very old with his second patent. Or the second one was William Feetham Junior. Or the 1767 patent is an urban myth that is now perceived as ‘the TRUTH’.

Anyway what does seem to be beyond doubt is that from 1810 you could actually buy something called a shower bath which used a manual pumping mechanism to (pump water from a lower basin (where the user stood and which collected the water) to an upper basin. Once the water was in the upper container the user pulled a chain and it released the water over their head.  You didn’t want to be too dirty, since you were using the same water each time, but then I guess that’s no different to a bath. 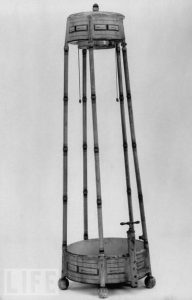 Feetham’s patent was for ‘Certain Improvements on Shower Baths’. It was deposited on June 13 1822 and was granted in December of the same year.

‘The intention of these improvements is to enable the patient, who is using the bath to regulate the flow of water, and thereby to soften the shower according as inclination or circumstances may require. This object is effected by two contrivances: the first is an adjustable stop, which may be set so as to prevent the cock from turning beyond any certain distance, so as to limit the opening of the water way to any required discharge; the second is a division of the perforated box or strainer into several chambers by two or more circular concentric partitions, by which limited quantities of water let out from the cistern above are necessarily confined to limited portions of the surface of the strainer …’

More history of showers next blog …. Including references to a past life and Russian dancing…