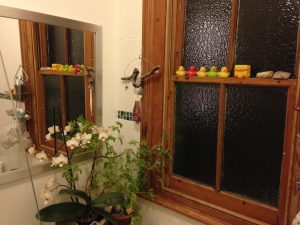 I then posted Views from a shower 1  followed by Views from a shower 2. As avid followers of this blog soon found out no-one I know has views of tropical beaches from their showers just the rather more prosaic towels, bathroom tiles and shower screens. But even those, in this brave new world of ours, can make for an exciting and philosophical blog… or even two exciting and philosophical blogs as I recently proved. If you don’t believe me check them out. For those who do just read on…

I ended Views from a shower 2 with a photo of Sam (which she hates so much I promised I wouldn’t repeat it here, though it does still exist in last month’s blog) and said I would reveal the view from her shower. And this, after she opened her eyes, is a snapshot of what she could see. 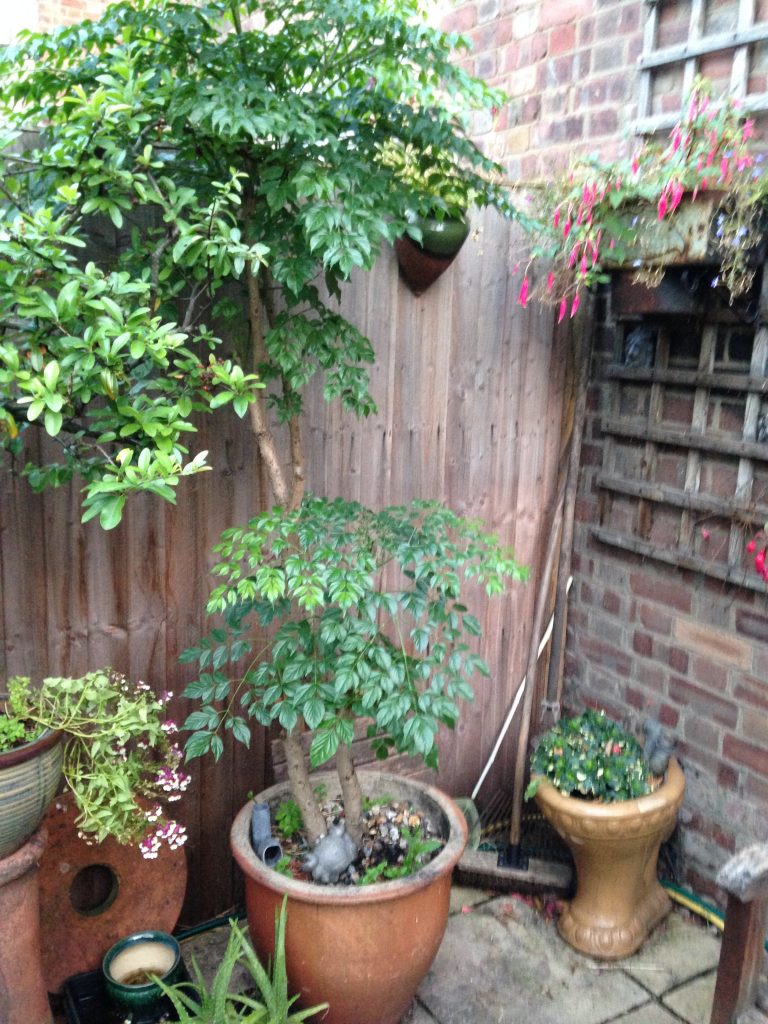 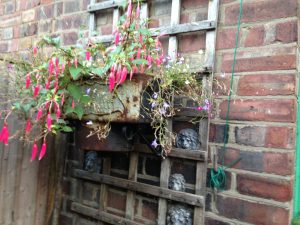 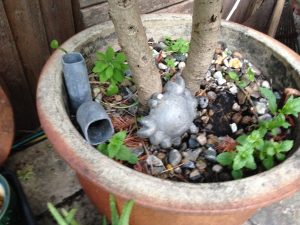 Pretty cool huh?? This is my corner of the garden hence all the plumbing paraphernalia. The WC pan and toilet cistern are probably noticed by all. But look closer and you will see a rather cool lead P trap (OMG!!) and some lead castings. Sure most are the ubiquitous lion’s heads, but amazingly, twenty years before Clarence the crab burst onto the scene, he was already immortalised in lead! Now that is cool… Frankie has a model of herself near the pond but, as Clarence says, ‘Well it’s not hand made by Cath at great personal risk to herself from lead fumes as she melted the lead scrap to 327.5 degrees C in a cauldron over a naked flame and skimmed off the crud before pouring into a sand mould, is it now??” And not even Frankie the flamingo can argue with that. . 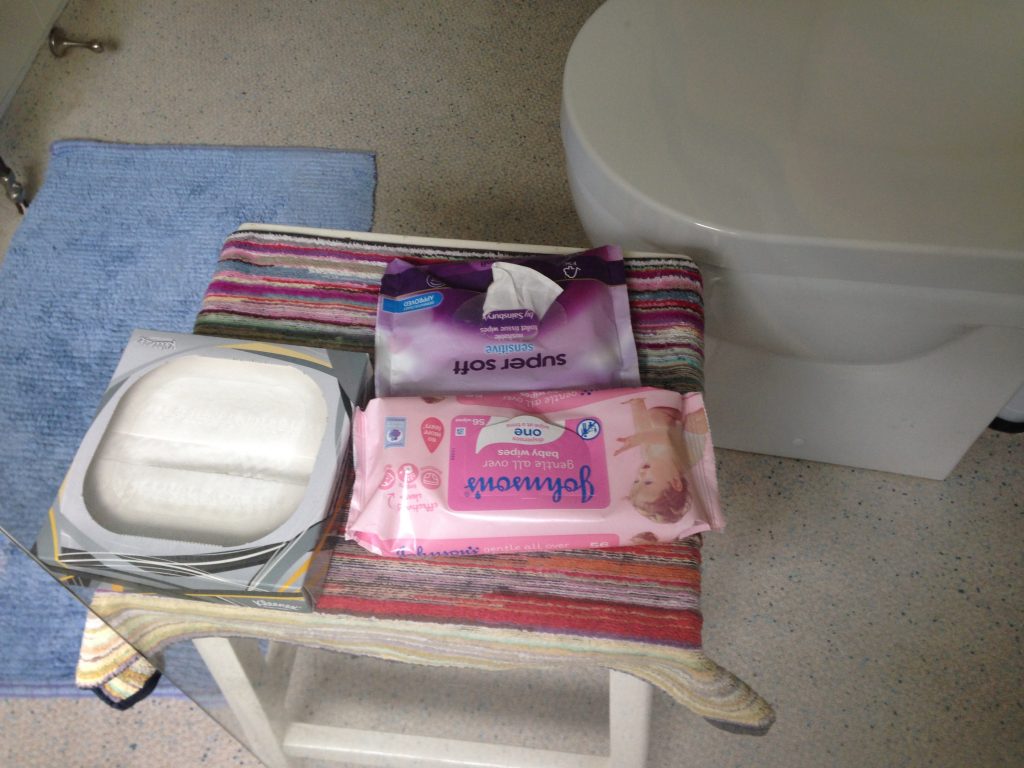 Back in the last blog I also talked about the view from Mu and Eric’s shower. They have moved and now live in a bungalow. The bungalow is far smaller than their old house but the shower is much bigger being a walk in shower with a nice clear glass screen. I showed a bit of an overall view in the last blog. But the reality is whenever I am standing in that shower my gaze is always pulled towards this – the stool on which sit the dreaded wet wipes.  Aaaaagggghhhh!!

So in the words of the bard of Stratford of Avon (or the unknown women who wrote most of his best stuff) How do I hate thee? Let me count the ways.

Wet wipes are now a £9.5 billion industry worldwide, 14% of them are used in toilets and they cause huge problems. There are two types of wet wipe. One type (no longer marked as ‘flushable’ but still thrown into the loo with impunity under the misguided impression that they are flushable) don’t break down at all so reach the sewage treatment plant intact, where they block machinery and have to be removed manually. This type are also the main cause of blocked house drains. ‘Flushable’ wipes do break down as they travel so are unlikely to cause blockages. But the problem is that they are made from regenerated wood pulp and have micro plastics in them, an issue we now know is really problematic. In many quarters they are now recognised as being worse for the environment than the non-flushable wet wipes. So, putting any sort of wet wipe into the toilet is a massive problem. So are Twipes the solution? They are like wet wipes in that they are, well, wet and you use them to wipe. But they differ in two main ways. Firstly a design one – they are on a toilet roll – and secondly and more importantly because they are made from virgin wood pulp cellulose. This means that unlike regenerated wood pulp they do not have microplastics in them. So when they break down in the water it is like toilet paper breaking down. I think they sound great though, sadly, they are not yet available at the Local One Stop near Mu and Eric, nor even any store near anyone … If you must use wet wipes, bin them don’t flush them, a rule that now, thankfully Mu and Eric are now following!