Now that is a new idea … or maybe not… But at least it puts off the moment when I have to ‘fess up that despite being the ‘best aunty Cath in the world’ my powers of persuasion of how a four minute shower will save the polar bears hasn’t yet worked with Sam (13) who is currently living with us, so I have had to resort to nefarious means to keep her showers within acceptable limits.

So, anyway, back to showering in fog. The practice of capturing water from fog is now well developed. Nets are strung across an area where fog habitually forms; as it passes through the nets (driven by wind) the water vapour condenses and drips down to the bottom of the net where it is collected via a gutter. In Chile, residents on the edge of the high altitude Atacama Desert – the driest place on Earth with less than 15mm of rain a year – have successfully used the system to irrigate their crops. The largest system in the world is currently in the Atlas Mountains in Morocco, where 600m2 of netting, at an altitude of 1,225 metres, harvests between four and fourteen litres of water per m2 of catcher per day. Ergo…there is water in fog, and you can definitely have a decent shower in fourteen litres of water, though four might be stretching it.

But the title actually refers to an invention by Buckminster Fuller who designed the fog gun in 1927 and prototyped it in 1949. ‘I had the experience in the Navy back in 1917, of being in the engine room and getting very oily and greasy, and coming on deck, and a very short while later without having done anything to actually clean myself up, finding my hands very, very clean, and my face clean, and it was from the great wind, and there was fog, and somehow this wind, and fog had a cleansing effect. Fuller calculated that his ‘fog gun’ shower, could clean a person in ten minutes using just one litre of water and that such low levels of water could even do away with drainage from the shower; ‘You could take a bath for an hour in a room where you don’t have any drainage because there isn’t anything to drain.’ He also had an answer for those who extolled the relaxing effects of a hot shower; ‘If fog gun bathing were done in front of a heat lamp, all the sanitary & muscle-relaxing effects of other types of bathing could be effected without the use of any bathroom.’ 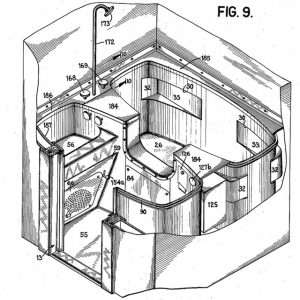 His system used a jet of compressed air (at a pressure of over 200 pounds/square inch), atomised water and a liquid solvent.[1] The kinetic force of the high-pressure air stream was utilised without the skin-damaging effect unavoidable in high-pressure needle-pointing of water streams. As Fuller put it; ‘The problem with a needle point shower, is at high pressure you will get little water droplets, but because the water is non-compressible it is like a little bullet, and you get to a point where the needle-point shower will break your skin. But if you take compressed air, and put atomised water into the compressed air, then the air can penetrate your pores without hurting you at all.’

He also designed a modular bathroom of which the fog gun was an integral part.

Compressed air was already being used then for certain industrial processes and still is today. Compressed air or other gases are mixed with a liquid to create fine spray atomisation which is used for various processes including lubrication, coating, mixing, humidification, dust control and odour control.  The type of spray can vary from an almost dry mist to a fine spray of a viscous material. The results achieved all depend upon the air pressure, the volume of liquid to be sprayed, and the viscosity of that liquid. With an increase in air pressure, the droplets size reduce creating a finer spray; conversely, with a decrease in air pressure, there is a larger liquid flow, and larger droplets are created. So if the air pressure is changed; the flow, droplet size (atomisation), the spray angle (within limits) and the spray distance are also changed. 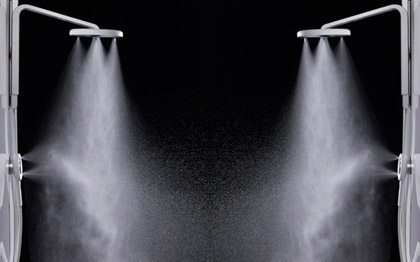 Fuller’s fog gun didn’t catch on then. In fact it doesn’t even seem to have ever actually been put into production. But the Nebia shower (which I blogged about in October 2015) raised 3.1 million dollars on kickstarter and sells at $399 a unit. At 3.4 litres/minute flow rate uses a lot more water than Fullers fog gun and doesn’t use compressed air per se. But it still uses the concept of atomising water droplets and is as close as there is in the domestic shower market today to Fuller’s invention.

Meanwhile, in the world of decontamination showers (and missing from last month’s blog) fogging shower cubicles are already used in the place of drenching showers to remove certain types of contaminants from clothing whilst using as little as 2 litres a minute of water. 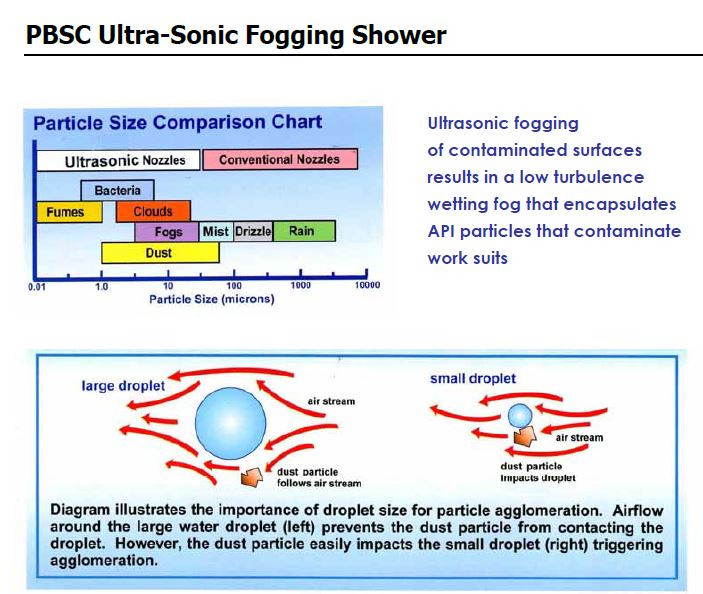 So maybe a modern version of Fuller’s fog gun will be coming to a bathroom near you soon!

[1] During his research Fuller and his team spoke to many dermatologists about whether they had any concerns of the effects of compressed air on skin, and found that time and time again the advice was the worst thing you can use on your skin is soap. Hence the solvent.