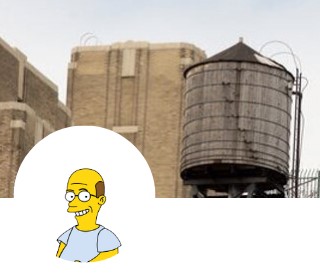 I saw Warren talk at a Waterwise event in 2005 in Oxford maybe earlier. Talking about the free WC upgrades in New York City as part of the implementation of mass metering. Something I had known about since the early 1990s and which I had waxed lyrical about ever since. Never omitting to mention the unlikelihood of it happening in the UK following the privatisation of the water sector in the 1990’s, all of which I mentioned in a breathless question from the floor at the end of his talk. It was like unexpectedly bumping into a childhood hero!

On the way back to London I sat opposite him on the train and bantered a bit. Or I bantered. The really weird thing is he was super funny on stage but very quiet on the train. I mentioned it (as you do) and then invited him for a cup of tea on Protea when we arrived back in Paddington (as she was conveniently moored up outside the station.) He stayed for about an hour. It was the start of a wonderful friendship and yet we never met again! He sent me weird and wonderful presents in the post, he wrote erudite and amusing blogs for ech2o, we would have random emails chats about certain water stuff that piqued our interest, he offered to give me his mist shower,  after he’d supported them on Kickstarter, got one  and then had realised it wouldn’t work in his house, and at one point when I was maybe going to New York I button holed him to arrange a trip down the new York sewers and, of course,  he said he would, and would take me to see a basketball game as well – he was a big fan of women’s basketball. Cue some email banter about how I preferred a proper game where you didn’t score points every 20 seconds. But that I would go and then he could come to London and I would take him to a test match.

And, more than all of that, it was Warren who persuaded me to go on Kickstarter to get funding for ‘The mysterious case of the sinking flamingo’ (and of course supported it when I did). Yep, I can pretty safely say that without Warren, Frankie the flamingo and Clarence the crab and all their subsequent adventures would have stayed in my imagination and over 5,000 kids and counting would never have learned stuff about being water smart or why it’s cool to be an engineer from them.

In January I was doing some mailchimp sorting and saw that his newsletter had soft bounced, and I had dropped him a couple of random, ‘hope all good, how about another blog?’ emails and had been vaguely unsettled by no reply.  And so I clicked on his details and he hadn’t opened the newsletter for over a year, and then I properly searched for the news that I really didn’t want to hear. And yeah, he died… Way back in August 2020.  Such a shame.

LIEBOLD–Warren C. Warren C. Liebold died unexpectedly on August 10th due to what appears to have been a sudden cardiac event. From a very young age, Warren, who was literally reading by age two, vocalized his concerns about our planet by instructing people on the city streets to “stop littering!” He was the president of his high school Human Rights Club, inviting the Black Panthers, among other groups to come speak to increase the consciousness of students. He was a volunteer draft counselor through the WRL, and thoroughly involved in the anti-war movement. Years later, Warren was as involved in the anti-nuclear and instrumental in closing down the Shoreham nuclear power plant. Volunteered many years at Clearwater Revival. Warren was an environmentalist, a scientist, a political activist, a marine biologist, a humanitarian and a mensch. He had recently retired after 21 years as Director of the NYC Environmental Protection Agency where he developed and implemented several important contributions in water conservation. He hosted Radioactivity on WBAI, taught a course at NYU, lectured at Oxford. Warren was a connoisseur of film, chili peppers, science fiction and mystery literature, mahjong, the Simpson’s and of infrastructure. Believe what he says: “Water is energy.”

Warren’s blogs he wrote for ech2o’s water round the Word web page.