I was in Delft recently with my partner where, as usual, we ordered tap water with our evening meal. It was pleasant enough, no discernable chlorine taste, but it certainly wasn’t worth the three Euros sixty that appeared on the bill! This slightly surreal experience was closely followed by a visit to Bruges where the restaurants and cafes refused point blank to serve tap water at all. So what better choice this issue than to investigate the bottled water industry in more detail?

Value of the bottled water market

It is an industry that has grown rapidly in the past 25 years, with global consumption in 2010 at 225 billion litres and a worldwide market worth £52 billion pounds a year1. It is a staggering fact that the world spends over six times as much per year on bottled water than it does on water supply and sanitation2. Despite a slight downturn in sales in the last few years in the US (due to pressure from both environmentalists and municipal water suppliers) it is still the world’s fastest growing consumer beverage, and likely to remain so as increasing sales in China more than make up for any decrease in the States. Whilst consumption of bottled water per head in the UK is low compared to many European countries at 38 litres per head, it has also risen rapidly since the 1980’s. In 2009, 2.1 billion litres of bottled water were bought and the bottled water market in the UK is estimated to be worth between £1.4-2 billion3. 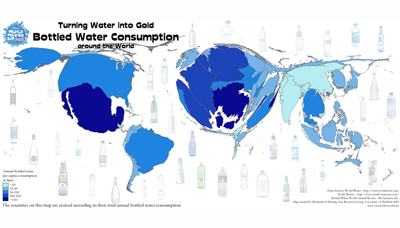 The decline in drinking tap water

So why is the number of people drinking tap water in the UK declining? As with most countries it is due to three main factors: a fear about the quality of tap water, preferences of taste and convenience.

We don’t need to drink bottled water in the UK because our tap water is unsafe; in fact, the tests that tap water is subjected to before it reaches our taps are more stringent than those required for bottled water. The “Story of Bottled Water” (from the same people that produced the “Story of Stuff”) explains how the bottled water industry in the US systematically set out to persuade consumers that tap water was essentially unsafe, and did so very successfully. In the UK the British Soft Drinks Association has been accused of doing the same thing, though they have denied it.

The taste issue is more subjective. Certainly there are areas in the UK where tap water is heavily chlorinated and unpalatable. However, filtering the tap water or allowing it to stand before drinking solves that problem, both at a far lower monetary and environmental cost than drinking bottled water. Depending where in the UK you live, tap water costs between 0.2 and 0.5 p per litre directly from the tap. Filtering at point of use will double the price at worst.

There are several environmental issues that are of concern when bottled water replaces tap water. Excessive withdrawal of natural mineral or spring water to produce bottled water can threaten local streams and groundwater, transporting the water to the consumer results in a far higher carbon load than delivering to a tap; the manufacture and disposal of billions of plastic bottles causes pollution, litter and fills landfill sites.

The carbon load of mains water in the UK is, on average 0.35kg CO2 for every m3 of tap water delivered to the tap. Compare that to the carbon load of trucking bottles of water around the UK, a heavy and bulky commodity. To exacerbate the situation, of the 2.1 billion litres of water we drink every year, only 1.6 billion are UK-produced, meaning that 24% of the bottled water we consume in the UK is imported4. Whilst most of our imported water is from France, bottled water from Turkey and Fiji and even bottled rainwater from Australia (Cloud Juice) is available in our shops.

To reduce bulk and weight most bottled water is now sold in plastic rather than glass bottles, which brings extra environmental problems. Most plastic water bottles are made from polyethylene terephthalate (PET), which is recyclable but research in the US has shown that less than 20% are recycled, with the bulk of the remainder going to landfill. Whilst figures are not easily available for the UK, the figures are likely to be similar. In both Sweden and Germany there is a substantial deposit on plastic bottles at point of sale and therefore recycling rates are far higher, but there seems little political will to introduce such a system in the UK in the near future. Because so much bottled water is consumed outside of the home environment, many empty bottles are disposed of in street bins where recycling rates are far lower than from home bins. Even recycling does not completely solve the problem as only 4% of PET bottles are recycled back into new bottles; most are merely downcycled.

At first sight this does not seem an issue that those of us who work in the building industry can affect. But when we design kitchens we can specify a separate filtered water tap outlet and in the commercial sector we can design in water fountains or space and water connections for chilled water units fed directly from the mains water supply.

With thanks to Laurie Wilkinson, ech2o intern, who did the research for this article.

Should you drink bottled water?