Public toilet provision in the UK has been the victim of government cutbacks and decline, with many local authorities no longer providing toilets. Whilst this is bad for everyone it is particularly problematic for women who have less provision than men to start with, but their needs are likely to be more pressing than for men, because of pregnancy, menstruation and caring for babies and small children. But the toilet problem is even greater at the international level (Greed, 2003). Of the approaching 7 billion people in the world, around 2 billion lack not only toilets but accessible water supply, and electricity too. There are more mobile phones than toilets in the world. But toilets are not glamorous consumer items like phones, or for that matter, designer handbags. Toilet provision is not a luxury but an absolute necessity in achieving world health and development. This is particularly important when over 50% of the world’s population is now urbanised, but a third of that number live in slums, shanty towns and unofficial settlements lacking the basics in terms of water and sanitation, so people urinate outdoors, and defecate outdoors, which is particularly dangerous for women (George, 2008). But, why bother to do anything? Everyone, not just the poor, is affected by toilet inequality. In highly urbanised situations, as in the South American mega-cities, rich and poor often live in close proximity, luxury apartments across the road from shanty down development. Flies are no respecters of class or income and so rich people could be ‘eating other people’s shit’ as they fly over from the cess pits of the shanty towns and land on the food plates of the rich. All sorts of classic killer diseases, rampant in the developing world are water-borne diseases. They are transmitted by faecal contamination of water sources, exacerbated by poor drainage, standing water or simply locating the toilet in the wrong place upstream from the main drinking water source.

It is just so obvious that adequate and equal toilet provision is fundamental to eradicating disease, improving the economy and increasing educational levels amongst both women and men, but seldom are ‘toilets’ discussed. Western experts and national governments prefer to discuss ‘sanitation’ in abstract terms. Women are particularly badly affected by lack of toilets. There is no provision for women in many developing-world work places, villages, city centres, railway stations and bus stations, so this affects women’s mobility and chances of employment. To paraphrase a past British Prime Minister who argued that ‘education, education, education’ was the most important thing for the progress of the state of Britain, ‘menstruation, menstruation, menstruation’ is an equally important issue that must accompany educational policy in the developing world. 50% of girls in Africa do not continue with school following the onset of menstruation, because of lack of school toilets. Around a quarter of all women of child-bearing age will be menstruating at any one time, and every month up to 5 days will be lost in terms of school attendance. Lack of consideration of menstruation thus undermines the chances of achieving the objectives of successful implementation of the United Nations Millennium Development Goals (MDGs) in respect of education, health and employment and, of course, gender equality.

Whilst it is very important that menstruation is recognised as of key importance in achieving gender equality, we cannot assume that the solution to all the problems is a western-style one. Many western companies are flogging sanitary protection products in the developing. But are western disposable sanitary pads and tampons appropriate? Saskia Casteltain, who has been working with the UN on menstrual hygiene, argues that if every woman used western sanitary pads and tampons it would create such a pile of waste for disposal that it would be far higher than the disposable nappy mountain. The Moon cup, which is inserted to collect the menses blood inside the woman, has been heralded as the ultimate green sustainable solution. But in many cultures inserting tampons is seen as suspect in terms of virginity and purity laws, and many millions of women who have experienced Female Genital Mutilation (FGM) are unable to do so. Washable, locally-made pads that can be recycled are essential, especially since many girls and women simply cannot afford western products, and the sewerage system cannot cope with them either.

The historical roots of underprovision for women

But why is there such a neglect of women’s needs in particular? In the UK sanitary reform came about in the nineteenth century in the wake of the effects of the Industrial Revolution, resulting in major improvements in sewage and drainage systems, and public toilet provision. But the instigators of such change were mainly gentlemen engineers and sanitary experts who appeared to consider it was unseemly to make public toilet provision for women, as respectable women were not meant to be out on the street ‘in public’ but at home caring for their family. As a result whilst palatial urinals and public toilets were built in abundance for men, women were lucky if they were given two cubicles (Greed, 2004). 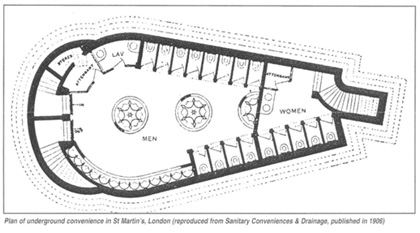 The problem of unequal provision for women goes back a very long time and is still widespread in western countries too. For example, in England official government toilet regulations have historically, by law, given more provision to men than women, as stipulated originally under the 1875 Public Health Act. The problem was that most of the engineers, architects and decision-makers were men, and they had very little concern with women’s needs (Penner,2013). The needs of women who comprise a major component of toilet users were never heard or understood by these men. Under the, still in force, 1936 Public Health Act, local authorities were granted powers to provide public toilets, but since this law was not compulsory only permissive, public toilets are a soft target every time there are cut backs. This act also allowed local authorities to charge for toilets, ‘except for urinals’ resulting in only women having to pay. This act was revised recently to conform to equality legislation, by making it legal to charge both men and women! Turnstiles and payment systems have been installed in many of the remaining public toilets. Such a basic necessity should be free and arguably we have all paid in our taxes and rates already. Many public toilets, mainly designed by men, have very small cubicles and narrow doorways. An overflowing sanitary disposal bin is often wedged beside the pan in touching the seat, clearly signalling the low priority given to menstruation. So we are still not getting what we pay for.

Women need public toilets more than men (Penner, 2013). If you want to know the true position of women in society, look at the queue for the Ladies toilet! Women are the ones who are more likely to be out and about in the day time, travelling on public transport more than men, and often accompanied by children or by elderly and disabled relatives. It is well established from research that women take twice as long to use the toilet than men, because of biological considerations, and also because of the need to go into a cubicle and to deal with more clothing than men. Women also have more reasons to go to the toilet, and more urgently at that, including dealing with menstrual flow, pregnancy and in old age incontinence (the majority of elderly people are female). Nevertheless, typically women are provided with less than half the provision for men, when they should have twice the number of facilities to prevent queues. Ratios of 2:1, even 3:1 in busy areas, in favour of women have been introduced in other developed countries, for example in Japan, whilst the USA now has potty parity regulations based on 2:1 ratios in over 20 states. Even if equal floor space is provided for the women’s and men’s side of a public toilet block, men are likely to have twice the number of ‘places to pee’ because a whole row of urinals can be provided in the same space where only a few cubicles can be fitted in. The under provision of toilets for women led to the toilet queue, and this was to have international consequences. As Michelle Barkley (toilet expert, architect and colleague) says, ‘we exported gender inequality and toilet queues to the rest of the world’, as the British Empire and colonisation grew apace. Even today Commonwealth countries have until relatively recently had the same building regulations, toilet standards and codes as Britain. Of course in some countries there are also pre-existing cultural and religious attitudes that have resulted in toilet discrimination against women, but patriarchal colonial toilet standards and regulations often made the situation worse.

In recent years we have campaigned to change the male-bias in the British toilet standards. A few key women, including myself, were able, at last, to get on the standards committees, updating the standards to accommodate women’s true needs. We have created a completely new British Standard specifically on public toilet Provision entitled BS6465 Part 4: Sanitary Installations – Public Toilets (BSI, 2010). This was also an opportunity to ensure the standard embodied changes in toilet technology and design, and to accommodate the needs of a wider range of user needs. In order to get better public toilets for women one must seek to achieve change at the highest political and attitudinal level within central government, rather than fighting with local municipal providers who may not have the power, resources or inclination to make changes, and whose world revolves around technical plumbing issues rather than user needs.

To conclude, public toilets are the missing link in creating sustainable, accessible and equitable cities. Lack of toilets has implications for health, hygiene, equality, the needs of the elderly, disabled and children, as well as tourism, business and retail turnover. Toilet provision is key to economic and social development especially for women. So investing in toilets is not money down the drain. Indeed, if human waste had an economic value then international companies would invest, and toilets would spring up everywhere! This may not be far off, as colleagues at UWE have succeeded in generating electricity from urine, whilst getting clean water and fertiliser as by-products of the process, a truly sustainable solution. (Ieropoulous, 2011).