Just last week I was staying in Lausanne, Switzerland and took a trip on the ferry across the vast expanse of water that is Lake Geneva to Evian, France. Evian is very pretty lake-side town with a gorgeous view of the huge towering Alps. It is best known for its mineral Evian water from the French Alps, bottled and sent around the world for all to enjoy, at a cost! Quite astonishingly also available as a refreshing facial spray!… 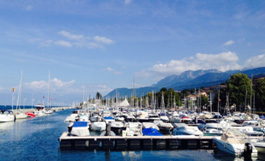 The town’s claim-to-fame occurred in 1789, when a French nobleman’s kidney stones were ‘cured’ after he had been drinking the magical water from the spring. By 1824, thermal treatments were being given at the source claiming ‘cures’ for health and a youthful body and mind.

The Evian website explains that the purification and mineral process of Evian water takes about 15 years. The snow-capped peaks of the Alps melt each summer and move through the mineral rich glacier sands of the Vinzier Plateau. These layers act as a sand filled sifter and eventually the water moves through and down the Alps and ends up in the springs in the town of Evian. Apparently the glacier sand is surrounded by clay, which is what protects the water from pollution. 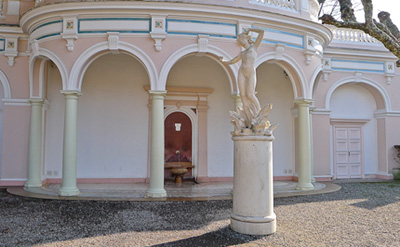 Evian town has fountains of water dotted around, but we were determined to find the famous ‘Cachat Spring’. After a steep walk up ‘Avenue des Sources’ we found it; currently being utilised by a local filling up large glass bottles to stow away in her car. I filled up my plastic water bottle; it was fresh and cold – tres bien! Especially after the steep climb. We happened to visit on a bank holiday so unfortunately most things were shut including the Evian ‘museum’. On sticking our head through the locked gates it appeared not so much a museum but a grand shopping opportunity! The shop was filled with all of their ‘limited edition’ bottles including the millennium glass bottle, haute couture bottles designed by Jean-Paul Gautier, and the collaboration with the ‘Mr Men and Little Miss’ company to create Mr Glug. All part of their celebrity following, some of whom claim to only drink Evian water. On the walk back down to the lake past another water fountain, I had finished my water and complained that we were now too far away from the Evian spring to fill my bottle!… at which point my Dad smirked and reminded me that we were in Evian therefore all of the fountains were Evian water. Well, he had a laugh!

Evian are also known for their quirky dancing/roller-skating baby adverts…check these out here…cleverly marketing to the huge clientele of parents out there. Their website promotes Evian water to be beneficial in pregnancy as well as to the newborn ‘like mother, like baby’. As a midwife, I think I’ll stick to advising free water to pregnant women and their babies! I think I’ll also try and beat the big guy and never buy bottled water again…

Lydia Clare-Skinner visits the French town of Evian, samples the local water and reports back, France