Until a few years ago, I lived in Upper Egypt within a small village community on the Eastern banks of the River Nile opposite the granite ridge which forms the Valley of the Kings.

The River Nile – which 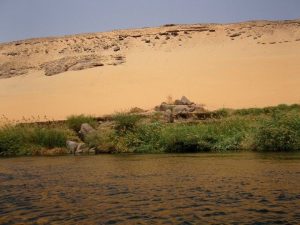 courses through over 10 countries – has always been the lifeblood of the average Egyptian.  The waters of this great river flow from south to north – emptying finally into the Mediterranean Sea.   Prior to the building of the Aswan Dam the annual flooding of the Nile (akhet
“inundation”) between June and September, caused by the melting of the snow on the high Ethiopian Mountains coupled with a heavy summer rainfall, allowed the Egyptian people, after the floods had subsided, to cultivate many different crops in the thick black silt mud which the akhet left behind.  The contrast between the cultivated green Nile delta and the barren desert, which forms a large part of the landmass of Egypt, is particularly startling when entering the country by air. 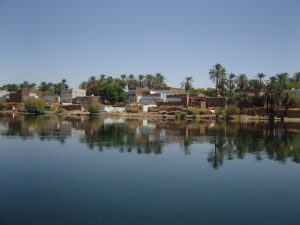 These days the River Nile remains a vital part of Egyptian life.   In everyday village life the supply of water is essential both for washing purposes (the average Muslim prays 5 times a day and must wash themselves prior to prayer) and also for cooking/washing and drinking purposes.  It is quite usual to find water fountains housed in stainless steel cooler units stationed outside someone’s house offering the chance to drink a cup of iced cold water whilst walking down the street. This service costs the householder but is free to the thirsty person walking down the street.  It’s a fact that you cannot visit a neighbour in the village without being offered shay (pronounced shy) and the Egyptian culture means that it’s considered very rude for the guest to refuse and for the host to fail to offer the tea.  You should also have water readily available to allow your guests to rid themselves of the dirt of their journey (important where most roads are unmade and where sheep and donkeys often roam freely) and its common to have a chilled water dispenser (similar to a tea urn) available so that each guest can have a kubbaayitmaya (“glass of water”).    The average Egyptian woman spends a large part of the day cleaning her house, washing all the floors is a daily ritual – the floors are generally tiled and each room will have a sort of drain where she can ensure the dirty water gets taken into the general village drainage system.  Floors are washing by throwing buckets of water over them – then using a sort of large rubber blade (mounted on a broom handle) to sweep the water towards the drain hole.  At the same time using a standard cotton mop and bucket (and often some washing up liquid) to get the tiles clean. When I put forward the idea of just using the mop and bucket to save water I was met with the cry of “why do we need to save water – there’s plenty in the river?”

Inside the average Egyptian house you won’t find many water saving devices, in fact the only water saving device you are likely to see is a bucket under the sink (used by the household to wash prior to prayer or eating) which usually catches the drips from the often leaking plumbing!  The average Egyptian is not aware of the need to be water efficient merely the on-going problem of how to pay his water bill on his meagre or non-existent income.   The same can be said for the average Egyptian bathroom (el hammaam) where there is likely to be a basic squat toilet with a tap and a piece of hose to use for flushing and washing as toilet paper tends to block the drainage system, plus a basic shower head attached to another tap and a piece of hose, jubilee clips seem to form the standard plumbing kit in Egypt and the connections often fail. You should always take up the offer to use the bathroom flip flops prior to entering to avoid spending the rest of the day in damp, smelly sandals (always remember to leave the bathroom flip flops where you found them – leaving them on your feet and walking to another area of the house is not recommended unless you want the children laughing at you!)

Walking around the village on any given day you will often see people along the banks of the Nile – boys swimming (as generally girls don’t swim), men fishing in small row boats, camels lazing along the banks, water buffalo cooling off, and on the first day of spring – Sham El Nassim (usually the day after Easter Sunday) – the banks are often crowded as traditionally families go out to “smell the air” and spend the day having a family picnic along the banks of the River Nile.

The river Nile is also an essential transport link – in Luxor you have to travel some kilometres south in order to be able to cross the Luxor Bridge.  A far simpler way is to use the river ferry.

The village ferry is located close to where the Nile tourist boats and the famous Sudan Steam Ship(”Death on the Nile”) ply their trade – a corrugated iron gang plank allows you to board it – and you must hope that the engine does not fail, nor a larger tourist boat mow it down mid-river – before you manage to travel from East bank to West bank in order to pay a visit to your sister and drink more tea.  The cost to travel from one side to the other is 25 piasters payable prior to departure.

During the 25 January 2011 revolution – the river became an important way for the protesters to travel from East bank to West bank without attracting the attention of the hated Mubarak secret police. It was also a good route to smuggle illegally “found” Egyptian artefacts in the hope of finding a buyer and becoming rich. In the uncertain times following the Arab Spring a supply of water was also essential to keep the men guarding the entrance to the village supplied with tea and a cold drink so that they could adequately protect their families. 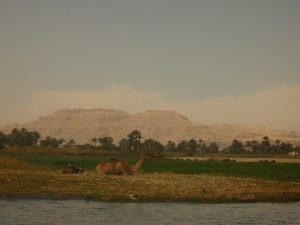 Water does not often fall from the sky in the form of rain in Egypt and when it does the children run out into the street and perform a type of rain dance, unlike in the UK rain in Egypt causes celebrations!  The first time I witnessed this I was truly astonished!  Unfortunately its’ more often the lack of water which causes the village women to gossip amongst themselves – quite often the water company (which like all the utility companies in Egypt is run by the Government) – will send a representative around to each house in the village to tell the occupants to fill every container they have as the water will be cut off for a number of hours.  The ensuing panic usually causes large scale disruptions to everyday life.  These occurrences are becoming more frequent since the decline in tourism means that the average Egyptian is living on less than a dollar a day and cannot afford to pay the E£50 per month water bill.  Likewise electricity outages are more frequent as the Government tries to claw back monies by cutting electricity for hours on end in order to punish those who have previously taken their electricity for free.

The need for water efficiency is not paramount amongst the villagers, the woman who is using a hose to wash the street in front of her house, the old man watering his vegetable patch, the children throwing plastic bags filled with water on unsuspecting passers-by, the women washing clothes in the old-fashioned wash boilers which are then rinsed and wrung out to dry on the washing lines extending across the rooftops, none of these people would understand water efficiency.  “The water comes from the river” they would say “we will always have the Nile water – God willing (In’Shallah)”.

The farmers (Fellaheen) draw their water to irrigate their cro
ps from the networks of canals scattered across the green Nile valley – this water in turn comes courtesy of the Aswan High Dam – but this is a highly inefficient method and loses as much as 3 billion m3 a year.  95% of all water used in Egypt comes from the River Nile, but this supply is also in danger.  Likewise the Nile is being polluted by industrial effluents, agricultural run-offs and human waste. 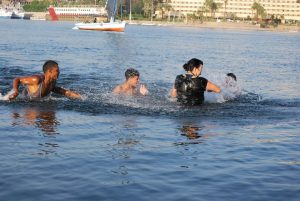 ge-old right to use 90% of the water from the River Nile, leaving its neighbours such as Ethiopia prevented from using this vital resource, is now being threatened by the current political upheaval in Egypt.  The Government has taken its’ “eye off the ball” and unless proper measures are taken to prevent water scarcity, to prevent pollution, and to engage the average Egyptian in water efficiency, the population could well be facing a major water scarcity problem perhaps as soon as 2020.

On the banks of the River Nile – Egyptian villagers views on water efficiency – Suzanne Armsden, Egypt