Meant to write this while Vigil  was the must see TV programme. Given that it’s set on a sub and all that. Not that you see them showering per se. Now of course it’s Squid Game. Though that series is so disturbing I hope I never get to shower in such a dystopian world…

We went to Wales in August. Proper out of lockdown. Stayed with Karen, Rossi and Ollie on the Gower as we have done so many times before. (Only not for the last 18 months obvs.) Disco shower was still going strong. Well, not that strong to be fair but it was at least still going. Then onto West Wales for a bit of a road trip in Beryl (camper van). Plan was a proper road trip with just a couple of nights max at any one place. But everyone and their aunty were camping given the difficulty of leaving the UK, so once we found a campsite with space we just stayed there and used it as a base. It was in Nine Wells. A tiny little hamlet with five buildings top. Everyone was super friendly. Unlike last summer on Exmoor when people treated us like we were bringing the plague from the big city. And very chatty. One thing that’s great about people being chatty is local knowledge that you sometimes stumble upon. Not information from the guide books but actual, proper, lived here for 55 years and my mum who’s 80 told me type of local knowledge…

The story goes like this. Guy who owns Nine Wells campsite’s mum owns a lot of the coast around there. And apparently also the rights to any contraband that is washed up onto the shore. One time his dad was at a function and met a German U-boat Commander. The dad mentions he comes from West Wales. GUBC says, ah, he knows West Wales well as their sub was stationed off that coast during the war and enquires where on the coast exactly. The dad says it’s a tiny little place I doubt you’ll know it, called Nine Wells. ‘Nine Wells!’ exclaims the GUBC. ‘I know it really well. It has the best water along the whole of that coast.’ Basically what the sub would do is when they needed water supplies would surface near the inlet at the dead of night. Two crew members would get into a rowing boat, row up to the beach, fill up various canisters with water from the creek and take it back. 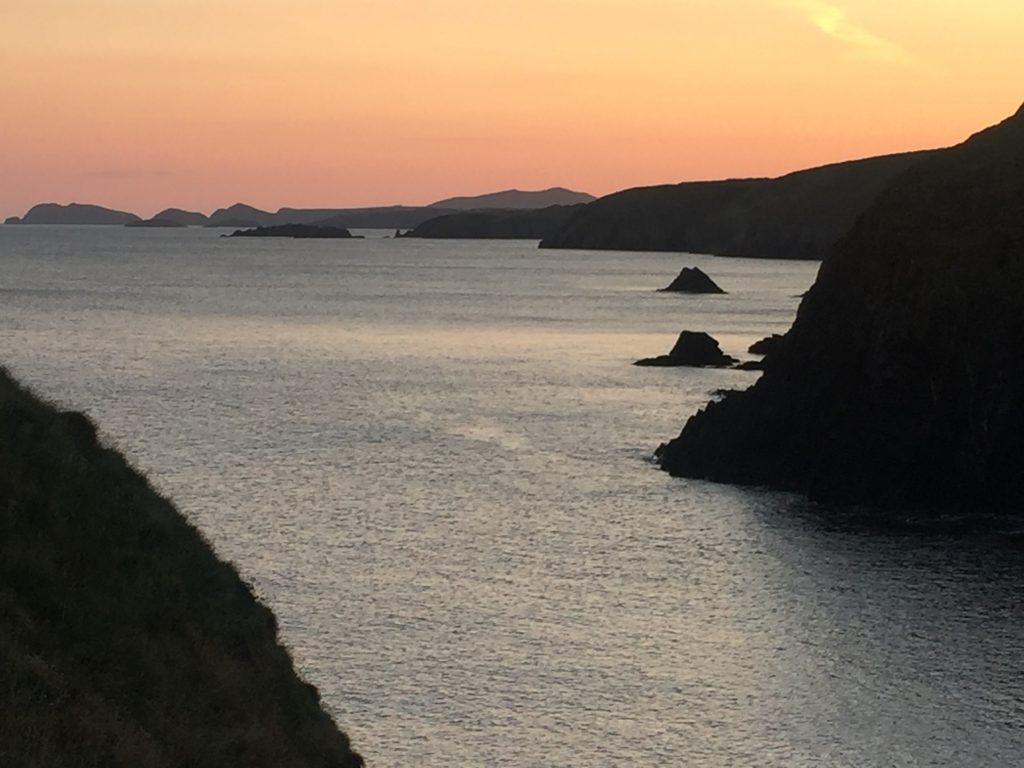 The view from the cliffs as the sun goes down. And the U boat waits to surface

I love this story. It’s so evocative. The parting of the waves as the sub silently surfaces. The splash of oars at night on a black sea. The crunch of the rowing boat as it hits the shore. The whispers of the crew as they pull the boat carefully up the beach before walking up into the valley, filling their receptacles and reversing the procedure. I assume the U boat didn’t stay at the surface, too dangerous. I also assume no radio contact between the rowing boat’s crew and the sub so would have to do it by a pre-arranged time/signal. 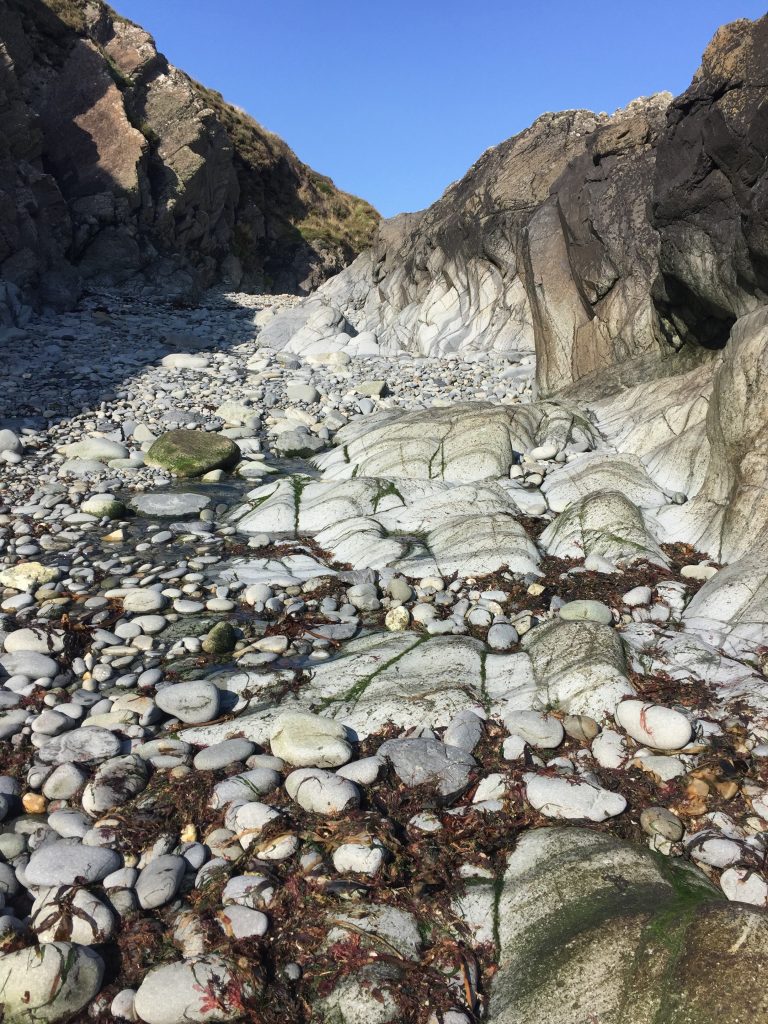 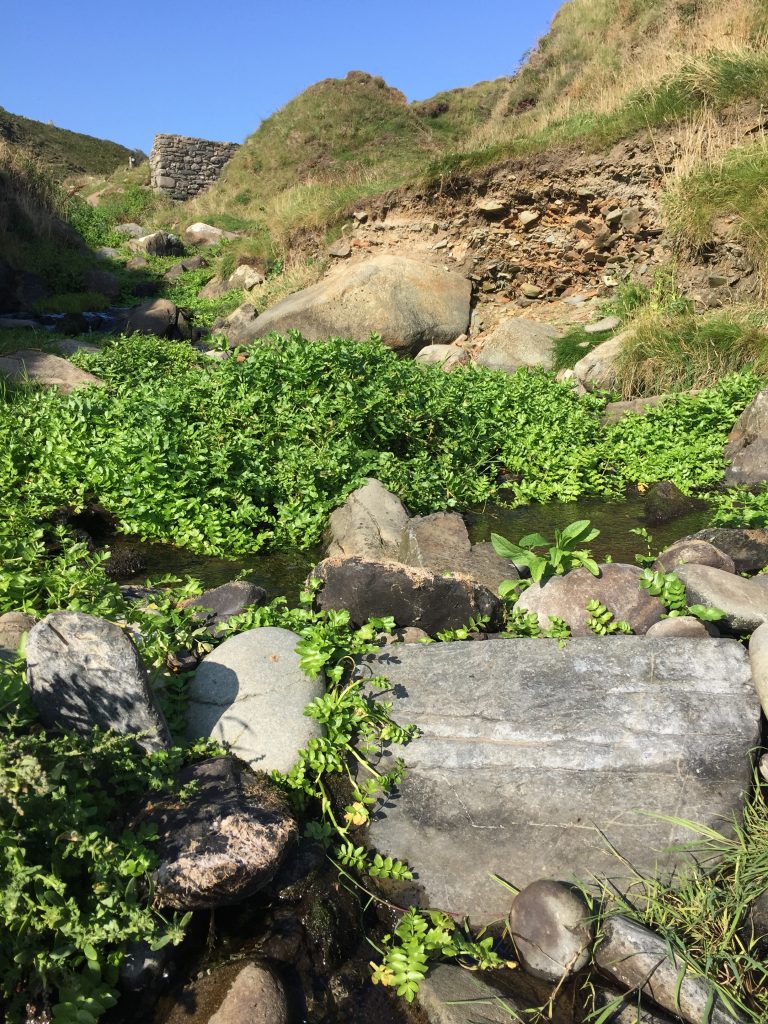 So, where does the water that ends up trickling into the sea at this point come from? Well, chatting with a.n.other local about the U boat submarine story led me onto more insider knowledge and the answer to that question. 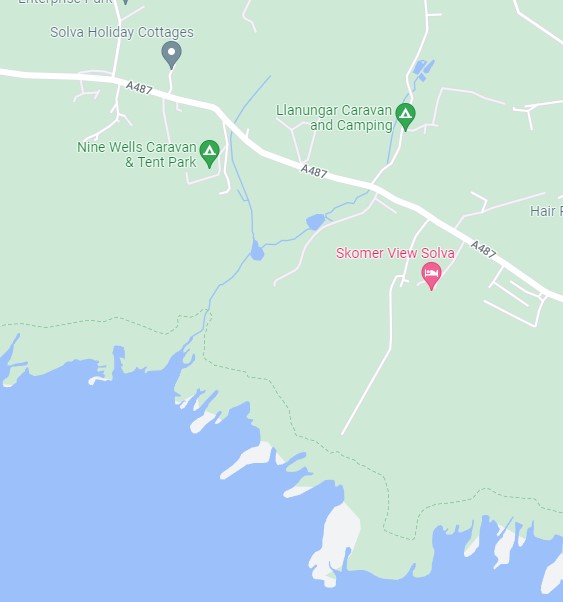 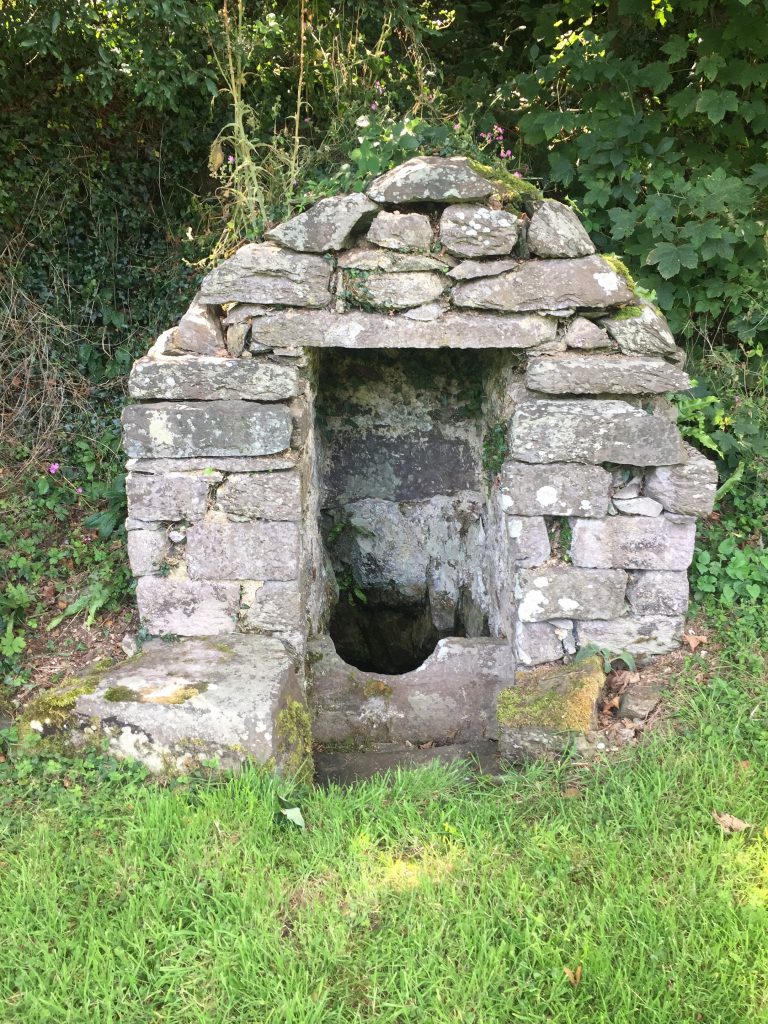 As can be seen from the map the water source starts on the other side of the A487 and has two branches before combining at a pond and running down to the inlet. Evidence of the wells is still there. The Victorians put in a pump house and an underground brick lined and brick pier supported cistern. The pump house is now a holiday let owned by the farm across the road, bought so that they could have good access to a constant water supply. The water from the cistern emerges just below the pump house before quickly disappearing underground and not resurfacing until about 300 – 400 metres from the beach. 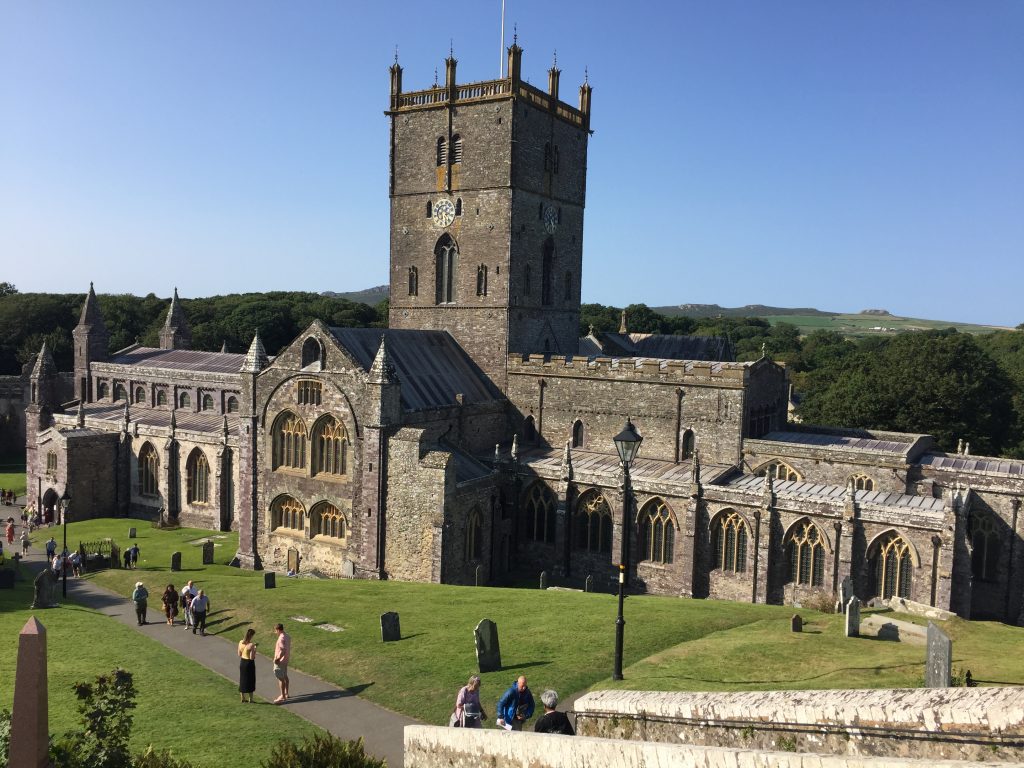 Elizabeth (my sister’s friend) has lived in Nine Wells for the last thirty odd years. One summer she worked as a guide in the cathedral at St David’s. The cathedral used to be one of the most important pilgrimages that could be made in the Middle Ages. Along with Compostela di Santiago. In 1123, Pope Callixtus II declared that two pilgrimages to St David’s were equal to one journey to Rome. On this journey, Nine Wells was the last place to get water before reaching the cathedral.

It took me a bit of time to get there but eventually I thought about showering on a sub. And how a submarine works. To answer the last question first, its air in ballast tanks that keeps a submarine afloat. Expel the air, replace it with water and the submarine sinks as this video shows. Down to about 250 metres, though some modern submarines go as low as 450-500 meters.

Re showering, obviously it’s not as technically tricky as showering in space. But, there is not a lot of water on a submarine, even though it’s surrounded by the stuff. A submarine has to distill the seawater to produce fresh water. It does this by heating the seawater to a water vapour. As the vapour cools it turns into water which no longer has any salts in it. Once you’ve had your shower the wastewater drains into a holding tank. To empty, the holding tank is pressurised to 700 psi which is enough pressure to expel the contents, while not allowing water to flood in, down to a depth of 493 metres. When the water is expelled it makes a noise, and because nuclear subs don’t want to give away their location they do their best to minimise the number of times they have to empty the tank.

Hence the classic submarine shower of twenty seconds! Ten seconds with the water on, turn it off while you soap and scrub and finish with another ten seconds for rinsing. That’s it. For me it’s a nice reframe in how much water you actually need when you take a shower, and it still works. But it’s pretty extreme showering.

And did the water as drunk by pilgrims over the 12th to 16th centuries and those German submariners in the Second World War taste good? You bet it did!

Last but not least would like to recommend Das Boot, which is a German film /TV series set in the Second World War aboard a German submarine or U-boat.